The frequency of gene exchange among the microbes in a person’s gut is linked to the sort of society that person lives in, according to a large international study published today (March 31) in Cell.

The researchers analyzed bacterial DNA to identify recent cases of horizontal gene transfer (HGT), a process that allows individual cells to mix up their genomes and acquire new functions from other bugs in the microbial community without having to reproduce. The team found that species in the gut frequently exchange genetic material, and that they do it more if they’re living inside people in industrialized or urban societies than if their hosts reside in rural or less developed environments.

“What’s novel and really impressive here” is the team’s use of whole-genome sequencing to study thousands of individual bacterial genomes, says Gladstone Institutes data scientist Katie Pollard, who was not involved in the study. While the results themselves aren’t unexpected given findings from previous work on HGT and industrialization in the context of the human microbiome, “this paper brings it all together and confirms it in a more rigorous way.”

The composition and diversity of the gut microbiome are well known to be tied to a person’s environment and lifestyle. Several studies have shown that people living in more-industrialized societies tend to have less diverse microbiomes, for example, and one 2018 study found that people migrating to the US from Southeast Asia showed a drop in microbiome diversity within a year of arrival—changes that the authors of that study and other researchers have suggested could be linked to adverse health outcomes in these people.

Most such studies have focused primarily on variation in the abundances of particular bacterial species. MIT microbiologist Eric Alm was instead interested in a role for HGT in shaping the genomes of individual bacterial species in the human gut microbiome.

In the current study, Alm and colleagues dived into data from the Global Microbiome Conservancy (GMbC), a nonprofit organization set up in 2016 by several authors of the new paper. Through the GMbC, which works with researchers all around the world, the team cultured, isolated, and sequenced more than 4,000 bacterial strains from stool samples of 37 people in 14 populations. 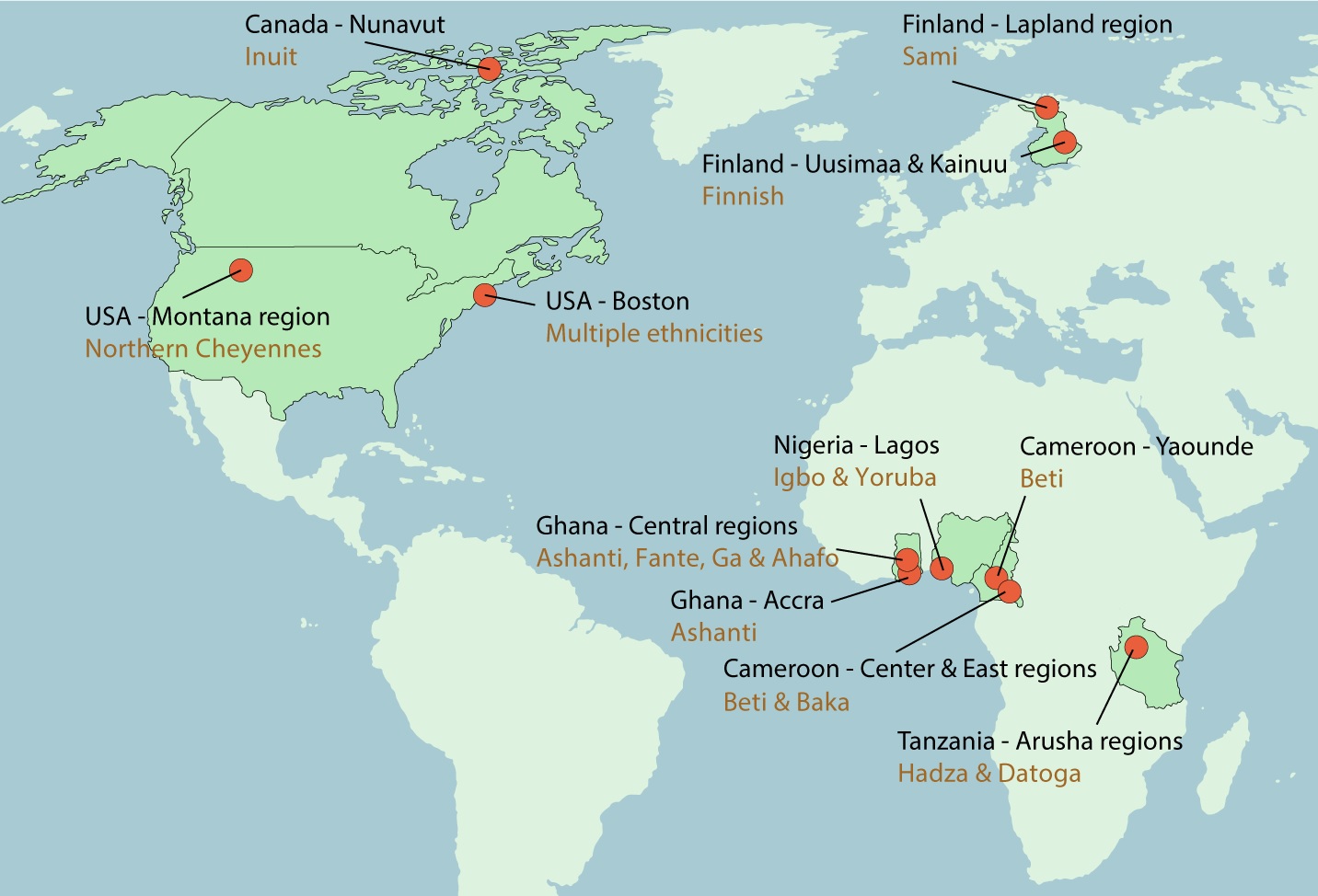 The researchers combined this dataset with data from 11 people living in the northeastern US, and then scored each population as industrialized or not (as defined by the United Nations’s Human Development Index) and urban or rural (as measured by population density), explains study coauthor Mathilde Poyet, a microbiologist in Alm’s lab and a GMbC cofounder. Individuals from Arctic Finland, for example, were classed as rural industrialized, while people living in cities in Cameroon or Nigeria were categorized as urban nonindustrialized.

To detect HGT in the participants’ gut microbiota, Poyet and colleagues went looking for long sequences—10,000 or more nucleotides—of DNA that were shared by pairs of bacterial species. Because high mutation rates in bacteria typically lead to divergence between different species’ DNA quite quickly, such shared sequences are suggestive of recent gene exchange.

The researchers compared the number of sequences shared by pairs of bacterial species within a single person’s microbiome to the number of sequences shared by the same species pairs across microbiomes belonging to different people, and found that the former was much higher, providing further evidence that bacteria were exchanging lots of genes within individual people’s guts.

Looking at the dataset as a whole, the researchers found that the microbiomes of people from more-industrialized and/or more-urban populations had the highest rates of gene exchange, says study coauthor Mathieu Groussin, a microbiologist in Alm’s lab and a cofounder of the GMbC. “Potentially the effect is stronger for industrialization, but that deserves further investigation,” he says. “What we can conclude for sure, based on these data, is that both factors matter, and we do see a clear trend of increased frequency of horizontal gene transfer from nonindustrialized rural to industrialized urban.”

The data indicate that the elevated HGT is driven by individual microbial species engaging in more gene exchange in industrialized and/or urban microbiomes than those same species do in nonindustrialized rural microbiomes, Groussin explains. That is, it’s not simply a side effect of industrialized populations happening to contain particular species that do more sharing. 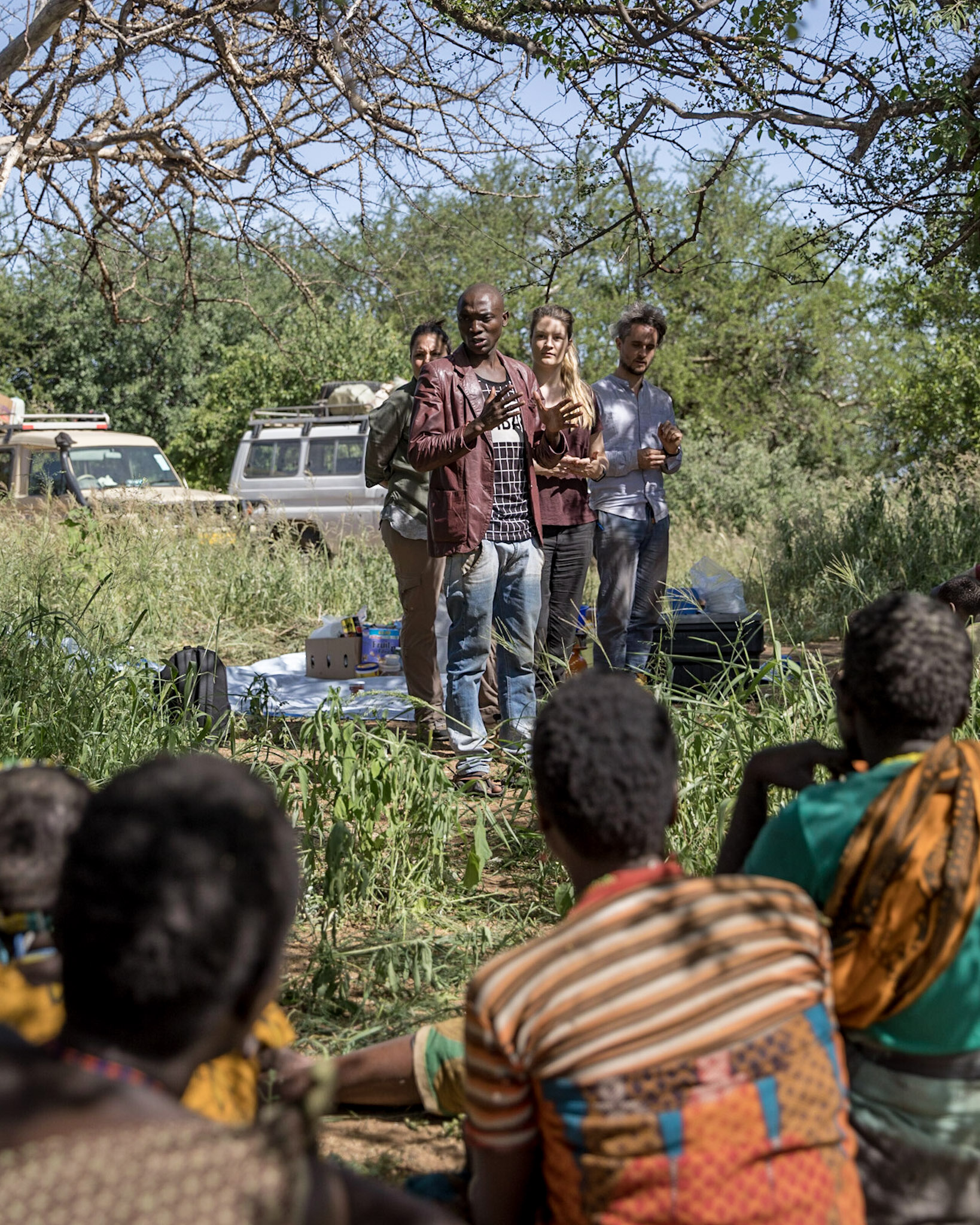 Consortium member Shani Sigwazi presents the mission of the Global Microbiome Conservancy initiative to the members of his native Hadza village in Tanzania.
© GLOBAL MICROBIOME CONSERVANCY / PHOTO BY C. CORZETT 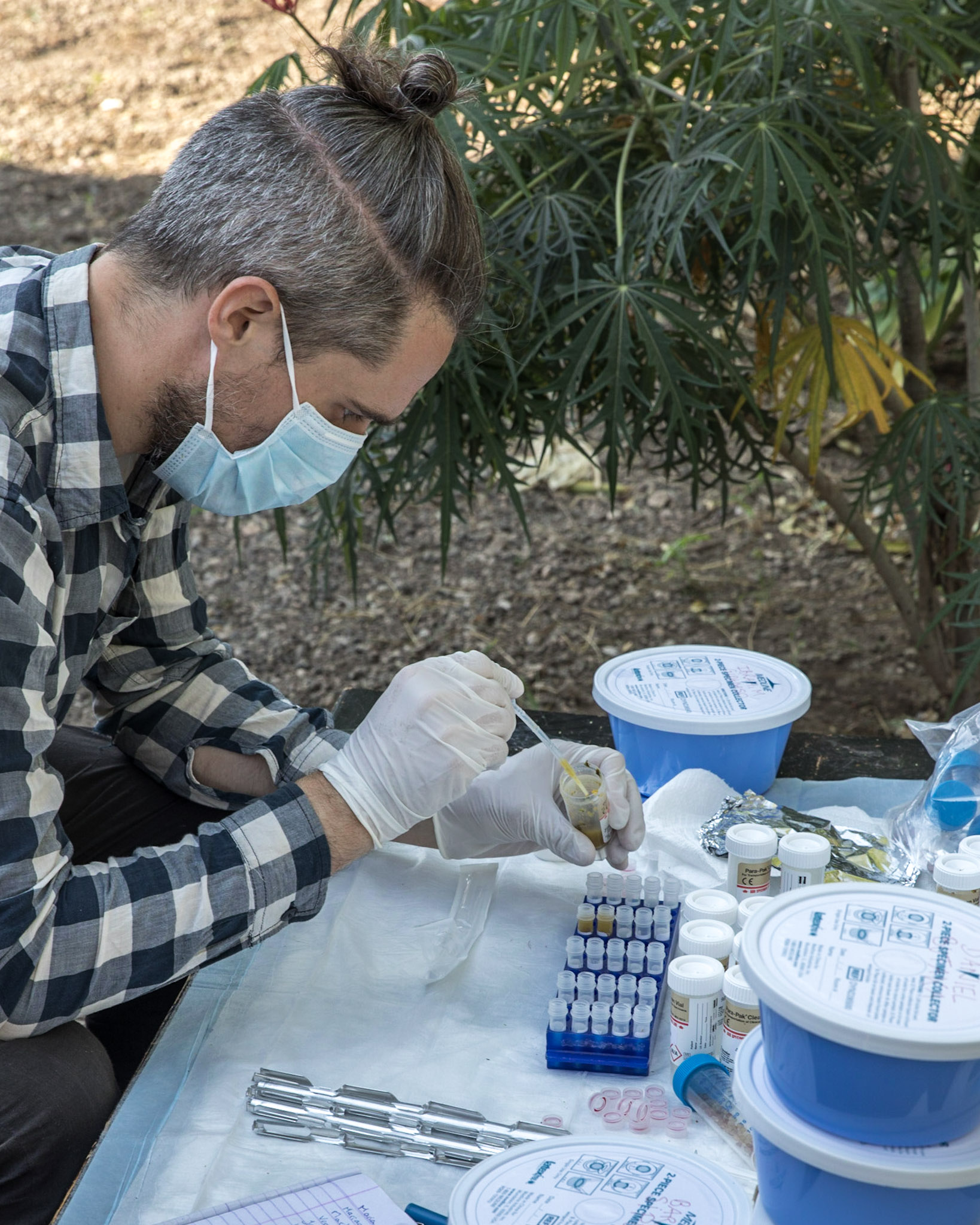 Pollard, whose team studies HGT with metagenomics approaches, notes that it’s not clear from the study what might cause bacteria to share more in particular environments. The study data reveal a positive relationship between a species’ abundance and its rates of HGT, she says, so the result may be partially explained by industrialized microbiomes being less diverse—having fewer species at higher relative abundances that in turn share more genes.

Another hypothesis the researchers consider in their paper, which was posted as a preprint last year, is that specific aspects of industrialized lifestyles favor HGT. Alm speculates that people in industrialized societies may be exposed to a wider diversity of other people in terms of gut microbiome content, and that this exposure could promote increased gene exchange in the gut. Other potential contributors could include diets or other lifestyle factors that influence the digestive tract microenvironment.

A microbiome fit for the host’s lifestyle

Many of the shared sequences the team identified have as-yet unknown functions. But by focusing on genes for which a function is known, the team found several hints of microbial adaptation to particular host lifestyles.

For example, many of the microbiomes the team studied had exchanged antibiotic-resistance genes, but this was particularly evident in the guts of the Datoga people in rural Tanzania, who have “recently started using antibiotics in their livestock, especially tetracycline,” says Groussin. “We do see a lot of antibiotic-resistance genes involved in tetracycline metabolism being exchanged between bacteria in their gut microbiome.” 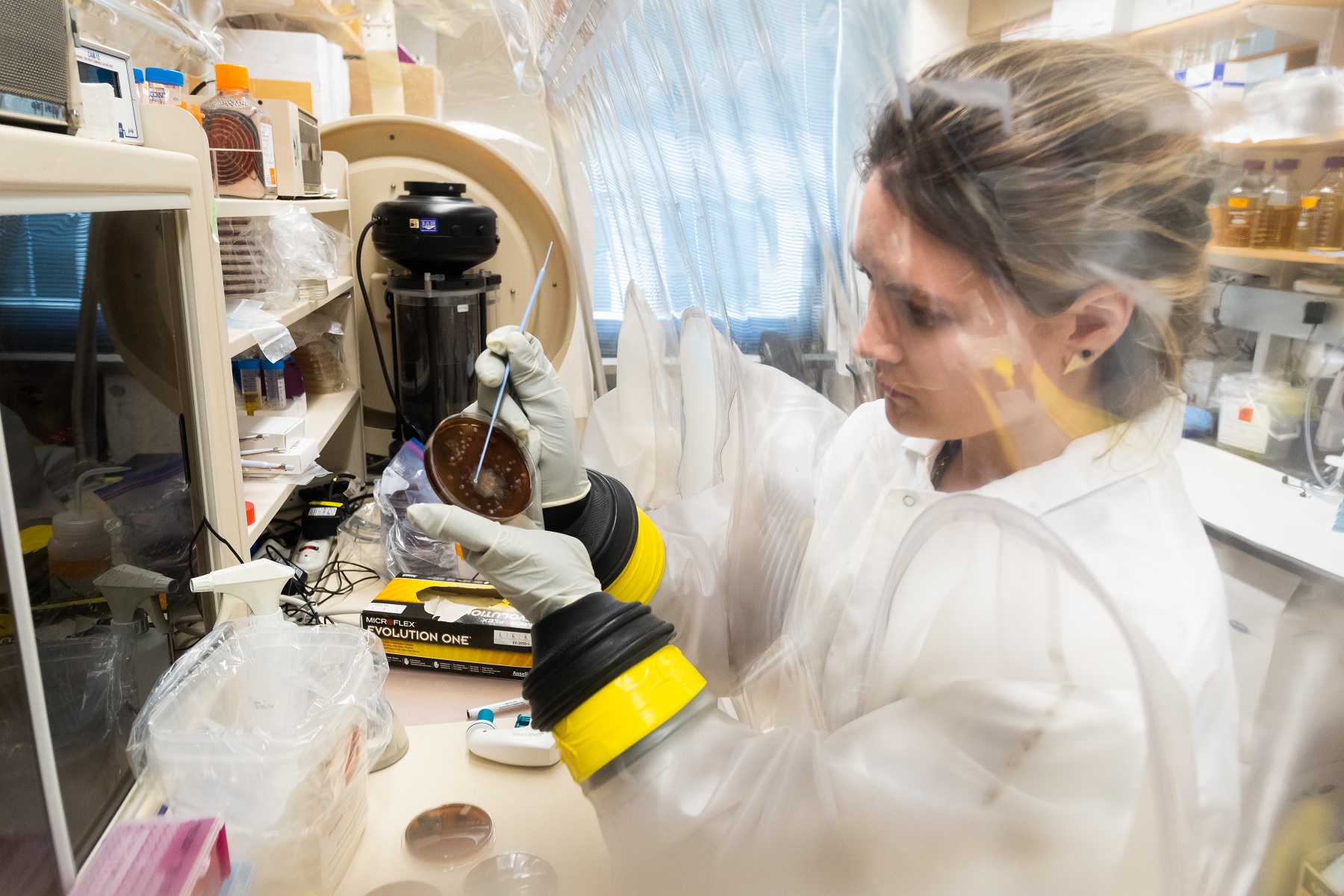 “It’s just a ton of work that they’ve done here,” says Justin Sonnenburg, a microbiologist at Stanford University who was not involved in the study. In particular, “to see this work expanded into greater diversity of people around the globe is super exciting.”

Sonnenburg says that alongside the team’s findings about HGT, “the power of this study will be what it enables down the road.” He and his Stanford colleague and partner Erica Sonnenburg have theorized that industrialization-induced changes to the gut microbiota could contribute to the onset of diabetes and other noncommunicable diseases common in many industrialized societies.

Datasets such as the GMbC’s, which contain reams of genomic data from gut bacteria, open up new opportunities to study these and other relationships between environment, microbiome, and human health, he says. “Having these microbes in hand will really enable this big leap into the next phase of microbiome research.”

For Alm, the latest study is a reminder of bacterial genomes’ enormous flexibility. As researchers work towards manipulations of the human microbiome, “I think we’ll have to be able to understand the system more holistically,” Alm says, adding that the microbiome is much more than just a roster of all the species it contains. Thanks to processes such as HGT, “when you put [microbes] together in an ecosystem, those genomes are not separate anymore,” he says. “They’re not independent.”