Stanford University biochemist and developmental biologist Dale Kaiser, whose work provided the conceptual basis for gene editing, died of complications due to Parkinson’s disease at his home in California on June 5, 2020. He was 92.

“Dale was a scientist the way Darwin was a scientist,” Lucy Shapiro, a developmental biologist and colleague of Kaiser at Stanford, tells The Scientist. His sharp mind and insatiable curiosity led him to constantly question the way the natural world worked, and he was tireless in his research, spending six days a week in the lab throughout his career up until last year. “His science was his life,” Shapiro says.

Kaiser was born November 10, 1927, in Piqua, Ohio. As a kid, he experimented with explosives and learned how to fix broken radios. From his father, he developed a love of “nature’s world,” he wrote in 2013. At age 18, he joined the Army Signal Corps, which manages communications for the armed forces, and a year later, in 1946, he enrolled at Purdue University, where he studied biophysics. Kaiser earned his degree in 1950, and pursued his PhD at Caltech, where he met his future wife, Mary Durrell, a technician in the lab where he conducted his research. 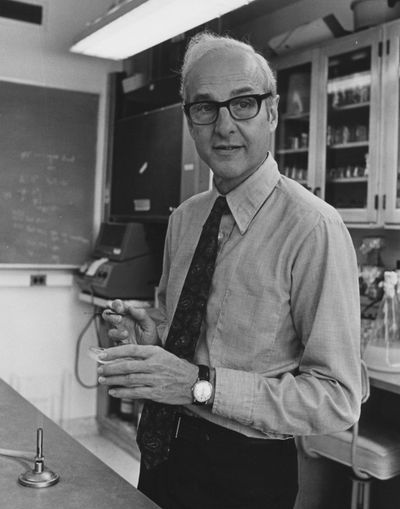 At Caltech, Kaiser worked in biophysicist Max Delbrück’s research group and studied the genetic structure of lambda bacteriophage, a virus that infects bacteria. With guidance from molecular biologist Jean Weigle, Kaiser discovered some of the details of how the virus could either hijack an E. coli cell to immediately make copies of itself or insert its genome into the cell’s DNA and lie dormant, only to emerge later to replicate. Kaiser’s work turned him into a leading authority on lambda, and after he earned his PhD in 1955, he moved to Paris with Durrell and their daughter and spent a year as a postdoc at the Pasteur Institute. There he worked with biologist François Jacob and microbial geneticist Élie Wollman to better understand the interactions between the genome of lambda and the genetic material of E. coli.

At Stanford, Kaiser continued studying the genetic material of lambda, work that was instrumental in identifying the molecular machinery responsible for replicating DNA. Kaiser also played a critical role in helping Kornberg and his postdoc John Josse decipher the directionality of strands of DNA and show the pairing of bases, adenine to thymine and guanine to cytosine, during DNA synthesis. That experimental work validated Francis Crick and James Watson’s theoretical model of the structure of DNA. But to geneticist David Botstein, chief scientific officer at Calico, Kaiser’s role in the work was mysterious, since Kaiser was focused on genetics and this research fell in the realm of biochemistry.

One day while driving to a conference Botstein, a mentee and colleague of Kaiser, asked him how he became involved in the work. Kaiser explained that Josse had done the experiments and collected the data, but couldn’t interpret them; Kaiser could. “I almost drove off the road when he gave me this answer,” Botstein tells The Scientist. “But that was completely Dale. He became a coauthor but never talked about this stuff himself. It wasn’t his experiment. He was collegial in that way.”

Working with his postdoc Ray Wu, Kaiser identified the sequence of single-stranded DNA that sits at the ends of the lambda bacteriophage’s double-stranded genome and determined that the order at each end synced so that the long strand became a ring when inserted into bacterial cells. “The first actual DNA sequence that was ever determined was determined by Dale,” Botstein says.

Building on that work, Kaiser and his graduate student Peter Lobban identified enzymes that would attach to any DNA segment so that synthetic strands of DNA would stick to each other similar to the way the lambda phage DNA stuck together to make a circle. With these artificial sticky ends, researchers could splice together genetic material that came from different strands DNA.

“That fundamental finding forever changed biology from simply the study of existing living entities to [the] creation of new ones,” Shapiro says in an obituary of Kaiser released by Stanford. The discovery laid the foundation for genetic engineering.

He was really a heroic figure. His work represents an important chapter in biological sciences.

In the early 1970s, Shapiro, a newly minted assistant professor at Albert Einstein College of Medicine in New York, reached out to Kaiser for guidance. She wanted to study microbial development, specifically, how the spatial positioning of a cell’s molecules was encoded in DNA and how the happenings inside a cell were coordinated to keep it alive. She knew she wanted to use Caulobacter crescentus to begin to answer these questions, but she also knew she would need to win grant money to do her work. Shapiro had never written a grant before, and she wanted help from someone who had successfully submitted grants with a developmental biology angle to the National Science Foundation. She knew Kaiser had had success and asked him if he might share a winning grant proposal of his with her.

“He was legendary by then,” she says. She, on the other hand, was “quite young, very green,” basically, a nobody in science. Yet, “Dale, being the consummate gentleman, the wonderful person that he was, sent me one of his,” Shapiro tells The Scientist. “I wrote my first grant under the tutelage of Dale.” Shapiro’s grant was successful. That correspondence, she says, “started a lifelong friendship.”

Shapiro recalls a meeting where she, Kaiser, and Harvard University molecular biologist Richard Losick walked down to the beach, where they saw a flock of about 100 birds flying in a logical formation. When he saw the birds, Kaiser said, “That’s what we have to understand. We have to understand how in nature living organisms swarm, what signals do they use to make swarms?” He said something similar as the trio watched a swarm of fish swimming synchronously in a tank at the Monterey Bay Aquarium.

Kaiser had switched from studying from lambda to myxobacteria in the 1970s, and inspired by the swarming he saw of birds, fish, and other species, he went on to identify the signals the bacteria use to swarm, essentially morphing from a single cell into a multicellular organism, a “wolf pack” that works together to take in specific enzymes to survive. Understanding that process, Shapiro says, is a pillar of development biology.

“He was really a heroic figure,” Losick tells The Scientist. His work “represents an important chapter in biological sciences.”

Kaiser didn’t brag about his achievements, and those who knew him casually probably did not know his work was pivotal to scientists’ current understanding of molecular genetics, notes Stanford development biologist Roeland Nusse. “He was so modest, and he maybe was somewhat underappreciated because of his modesty.”

Throughout his decades of research, Kaiser wrote about 400 peer-reviewed papers, mentored countless students and early-career scientists, and won several awards, including the U.S. Steel Award in Molecular Biology in 1970, the Albert Lasker Basic Medical Research Award in 1980, the Waterford Prize for Basic Medical Research in 1981, and the Genetics Society of America’s Thomas Hunt Morgan Award in 1992. He served as president of the Genetics Society of America in 1993 and 1994, and he was a member of the American Society of Biological Chemists, the American Academy of Arts and Sciences, and the National Academy of Sciences.

Kaiser is survived by his wife, daughter, and son.