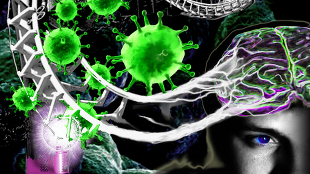 GUNTER PUSCHResearchers have reported promising results from two gene therapy trials for the treatment of two different rare diseases. The team used lentiviral vectors to swap out faulty genes for working copies in cultures of the patients’ own hematopoietic stem cells (HSCs)—cells that mature into all different types of blood cells—before transfusing the corrected cells back into the patients. In the both trials, 18–32 months after treatment a high precentage of the patients’ blood cells were genetically corrected, and disease progression was arrested.

Moreover, there was no evidence that the vector has delivered its genetic payload into the host genome in a way that can cause leukemia—an outcome that has shuddered previous human gene therapy trials using retroviral vectors.

Although the researchers recognize that longer-term follow-ups are required, the two studies—both of which were published today (July 11) in Science—indicate that lentiviral gene therapy is a safe and...

“We now have extensive engineering of hematopoiesis in humans with what appears to be safe integration [of therapeutic genes],” said Luigi Naldini, director of the San Raffaele-Telethon Institute for Gene Therapy (TIGET) in Milan, Italy, and a coauthor on both papers.

“I was very happy to see these two papers, as they are very encouraging,” noted Patrick Aubourg, a pediatric neurologist and gene therapy expert at INSERM in Paris, France, who was not involved in the latest studies. “The work really shows that this approach, with improvements in viral vectors, is coming to a stage where it can be thought of as a valid treatment for a number of diseases.”

Ex vivo gene therapy could potentially be used to treat a range of diseases, but until recently clinical application of the approach has been held back by problems with gene-transfer efficiency and safety. One major concern with gene therapy has been its propensity to cause cancer. The reason is that viruses integrate their genetic material almost at random in the host genome, so promoter sequences introduced alongside therapeutic genes can sometimes activate a nearby cancer-causing gene.

To overcome these obstacles, researchers have instead turned to vectors based on lentiviruses, which they have modified not only to improve the efficiency of gene transfer, but also to avoid the activation of cancer-causing genes by loading the vector with self-inactivating promoter sequences that exclusively induce the expression of the therapeutic gene.

In 2009, Aubourg and colleagues published results from a pioneering trial in which they used lentiviral-based gene therapy on HSCs for the first time to treat X-linked adrenoleukodystrophy (ALD), a neurodegenerative disease that affects young males. Roughly 2 years after the treatment, many of the patients’ immune cells carried the corrected the gene, and disease progression had stopped entirely. What’s more, the researchers observed a diverse range of gene integration locations in the cells—a sign that cancer-causing genes had not been activated. If they had, the cancerous cells would have out-proliferated the others, meaning the insertion location that switched on the oncogene would show up in a majority of the modified cells.

“That was a significant advance over prior methods because it showed more efficient and safer gene transfer,” said Naldini. But more demonstrations were needed to move ex vivo gene therapy from the lab to the clinic, he added.

In the latest studies, Naldini and colleagues show that further improvements to lentiviral-vector design increase the number of genetically modified cells. In the first trial, a team led by TIGET’s Alessandra Biffi treated three children with a rare lyosomal storage disorder called metachromatic leukodystrophy (MLD)—a neurodegenerative disease caused by mutations in the gene that produces the enzyme arylsulfatase A (ARSA). There is currently no successful treatment for MLD and patients usually die within a few years.

The researchers transferred a functional ARSA gene into HSCs taken from nine pre-symptomatic MLD patients. Analyses performed 2 years after treatment with the modified HSCs in one patient, and after 18 months in another two patients, revealed that 45–80 percent of the blood cells carried the functional gene. The enzyme was present at normal, healthy levels in these cells and in the cerebro-spinal fluid, where it was completely lacking before. What’s more, long after the symptoms would usually have manifested, the progression of the disease had been stopped in its tracks. “At this stage the patient normally have brain damage or are dead,” said Naldini, “but instead they are alive and thriving.”

In a separate study, a group led by TIGET’s Alessandro Aiuti used the same approach to treat three children with Wiskott-Aldrich Syndrome (WAS), a rare immunodeficiency disorder caused by mutations in the gene encoding a protein called WASP. Analyses carried out 20–32 months after the treatment showed that 20–25 percent of targeted blood cells were genetically corrected; the immune system had largely been restored in all three patients; and symptoms, such as recurring infections of eczema, were reduced or had disappeared altogether.

Crucially, in both studies, molecular analyses of the gene integration patterns in HSC progeny showed no evidence that the vector was activating oncogenes. “These lentiviral vectors don’t appear to have the same problem we saw with retroviral vectors; this is good evidence that they are safer,” said Naldini, though he emphasized that further follow-ups and larger-scale trials are needed.

Aubourg agreed. “Of course, we would prefer to have a vector that integrates into the host genome in place where we know there will be no adverse effect,” he said. “But for now, we have a green light—it looks safe. With these improved lentiviral vectors, gene therapy should not scare people anymore.”