Ancient and modern genomes reveal that a variant of the human growth hormone receptor likely helped our ancestors survive when food was scarce.

A globally rare variant of the growth hormone receptor also seen in Denisovans and Neanderthals may have helped our ancestors survive periods without food, a new study published on September 24 in Science Advances claims.

Reconstructing the evolutionary history of a particular variant of the growth hormone receptor gene (GHR) variant—the so-called GHRd3 variant, which is defined by a deletion of the gene’s third exon—researchers have found that its frequency declined sharply around 40,000 years ago. Follow-up experiments in mice pointed to a potential explanation for why: the deletion appeared to limit male animals’ size when fed a calorie-restricted diet. This sort of growth limitation could help males survive lean times but limit their reproductive success in times of plenty.

“This paper is exciting because it illustrates the power of combining evolutionary analyses of modern and ancient genomes with in-depth molecular characterization of the effects of genetic variants,” writes Tony Capra, a specialist in evolutionary and computational genomics at the University of California, San Francisco, in an email to The Scientist. “I believe that the context-dependent complexity revealed here for the effects of the GHRd3 variant (in terms of sex and environment) are likely common. We just haven’t been able to explore the molecular effects of other variants with evidence of recent selection in such detail.” 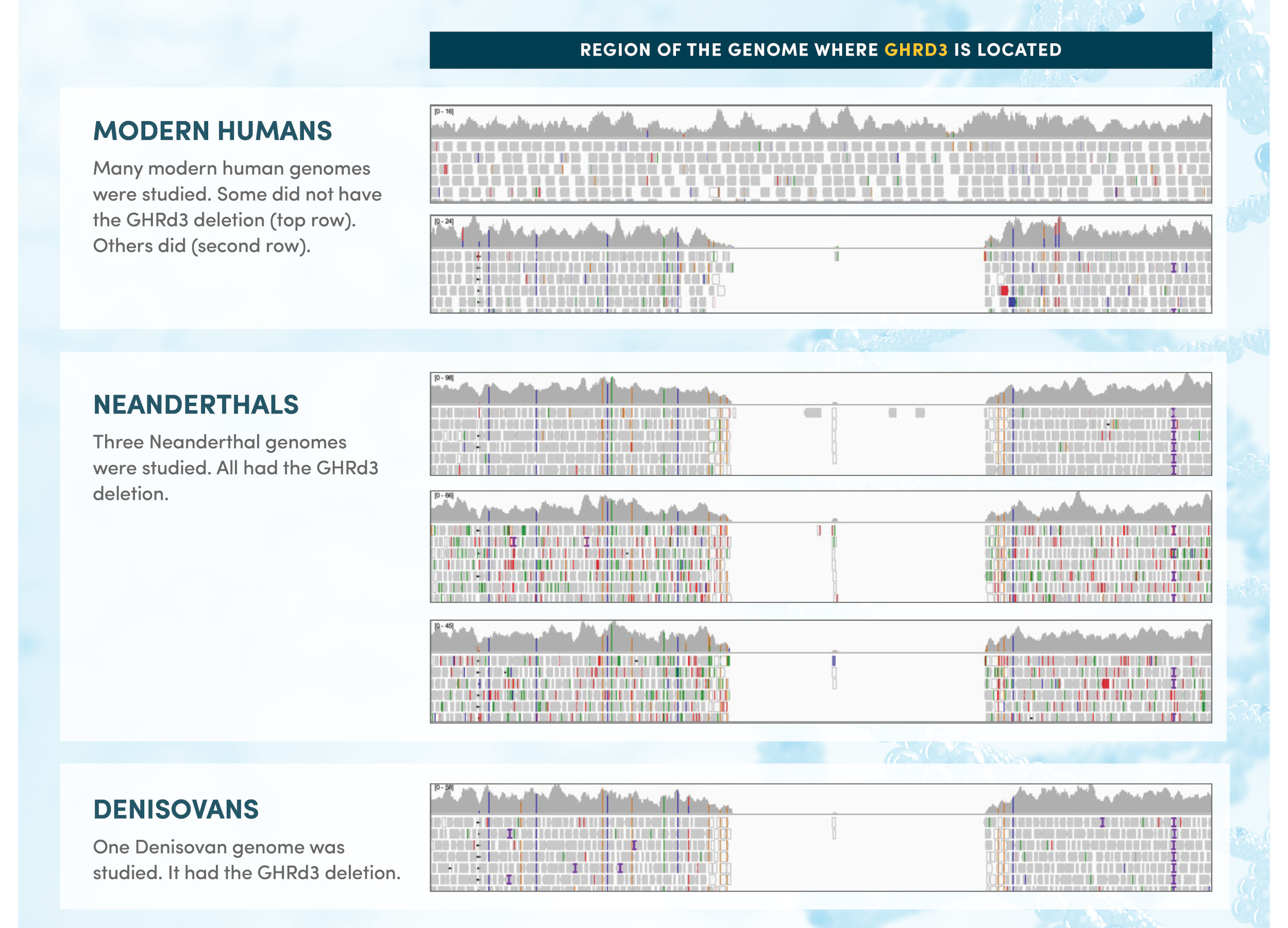 A comparison of the GHR variants from modern humans, Neanderthals, and a Denisovan; genome assembly diagrams generated by the Integrative Genomics Viewer (IGV).
Rebecca Farnham / Marie Saitou / University at Buffalo

In previous work, Omer Gokcumen, an evolutionary biologist at the University at Buffalo, and his colleagues scanned Neanderthal, Denisovan, and ancient and modern Homo sapiens genomes for shared structural gene variants (such as deletions), with the aim of finding ones that have “been lurking around since we were Homo erectus,” says Gokcumen. One such variant that they identified was GHRd3, so for the new study, they dug deeper into its evolutionary history and potential function, to get at why it might have persisted for so long.

Initially, the researchers hypothesized that the variant may have been maintained by a phenomenon called the heterozygous advantage, where individuals that carry both versions of a gene (are heterozygous) have an advantage over people who carry duplicates of one version (are homozygous). A well-known example for this is the sickle cell allele, which protects heterozygous carriers from some forms of malaria. But this did not fit with GHRd3’s reconstructed evolutionary history. Instead of being maintained at stable levels throughout human history, GHRd3 emerged as the dominant growth hormone receptor allele in ancient humans roughly 1 million to 2 million years ago, and it stayed that way for a very long time, until 30,000 to 40,000 years ago, when it rapidly declined in frequency in much of the world, a sign of change in selection pressure. “This was very interesting because you rarely see selection on human variation,” Gokcumen explains.

That begged the question: Why did the deletion suddenly become largely disadvantageous in the Upper Paleolithic, after appearing to be advantageous prior to that? In the literature, GHRd3 is associated with smaller birth size, early onset of puberty, and increased longevity—traits that Gokcumen observed are also associated with a starvation-related phenomenon known as “catch-up growth,” where growth later in life compensates for smaller birth weight and size due to malnutrition.

The team decided to look closer at GHRd3’s potential role in starvation resilience by examining the frequency of the deletion among children in Malawi who had survived malnutrition. The deletion was less common in children who exhibited a more severe response to malnutrition called Kwashiorkor, which includes edema, loss of muscle mass, and an extended belly, than in children with a less-severe response. “In other words, the deletion seems to be protective against that particular metabolic syndrome,” says Gokcumen.

To further interrogate the link between malnutrition’s effects and GHRd3, the team used CRISPR-Cas9 to knock out the third exon from the mouse version of the gene, generating a murine model of the gene variant. That revealed a sex-specific difference: when male mice carrying the deletion were fed a calorie-restricted diet, they ended up weighing the same as their female counterparts, while in wildtype mice, male mice were always larger than females (the deletion had no effect on female mouse weight). “This deletion may be helpful, for males especially, to survive under resource-restricted conditions,” Gokcumen says.

A sex-specific effect of the deletion might not be so surprising, as there are sex-dependent differences in GHR gene expression in the liver, a place where the growth hormone receptor is highly expressed. While male mice typically show a cyclical daily expression pattern of GHR, the expression is stable in female mice. In the study, female mice exhibited this stable GHR expression throughout the day regardless of which allele they carried. However, the cyclical daily expression pattern of GHR normally seen in male mice was dampened in those with the deletion. And downstream of the altered GHR expression, the researchers found several genes that were differentially expressed in males with and without the exon deletion.

“It seems that the calorie-restricted male mice with the deletion end up expressing a female-like transcriptome in their liver, which in turn, we think, leads to a lack of sexual dimorphism in size,” Gokcumen writes in an email to The Scientist.

Linking these results back to the evolutionary history of GHRd3, Gokcumen says males may benefit from being smaller in resource-limited environments, but when resources are abundant, being larger may help secure mates. In that way, the deletion “may be detrimental for fitness if starvation is not a big deal,” Gokcumen writes. Gokcumen and his team hypothesize that ancient humans and Neanderthals may have faced starvation more frequently, and that with the invention of tools that would have increased the flexibility of their diet, resource limitations became less important between 70,000 and 30,000 years ago, coinciding with the decline of GHRd3.

While that idea creates a coherent story, it leaves some things about GHRd3 unexplained, says University of Haifa and Albert Einstein College of Medicine geneticist Gil Atzmon, who has researched GHRd3. Namely, the current geographic differences in frequency: nearly 50% of the population carries the allele in some African populations, while it is much rarer in populations in East Asia. “Invention of tools . . . should have [affected] the world evenly more or less and not as we see [in the paper] more in China and less in Africa,” writes Atzmon in an email. Capra agrees, writing that “the dynamics and potential drivers of the decrease in frequency over time and geography need further investigation.”