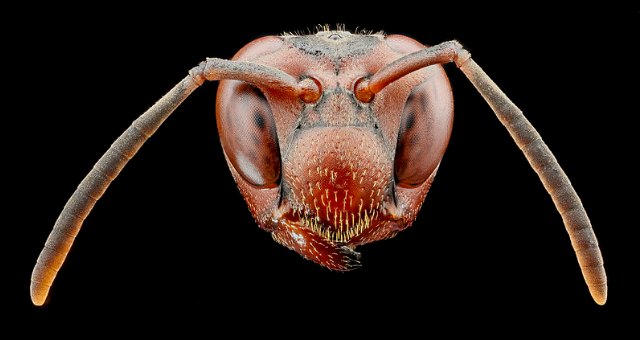 Polistes metricus, femaleWIKIMEDIA, SAM DROEGEHumans are face-recognition specialists. We can pick out faces better than other patterns, but not all animals excel like we do. A few groups of large-brained social animals, including macaques and sheep, are known to recognize each other by facial features, and among insects the talent is especially rare—only a handful of paper-wasp species are known to do it.

To uncover the genetic basis of wasp face recognition, researchers analyzed gene expression in the brains of paper-wasp species that had been trained to recognize faces and compared that with wasps trained to recognize patterns. As reported today (June 14) in the Journal of Experimental Biology, they found that the brain gene-expression patterns involved in face- and pattern-recognition are different.

“There is something special about face learning, and we can detect this on the level of brain gene activity,” study author Ali Berens,...

“There’s obviously a difference cognitively in wasps that are learning a face as opposed to just any old pattern,” Seirian Sumner, a wasp researcher at University College London who was not involved in the work, tells The Scientist.

Previous research by study coauthor Elizabeth Tibbetts, an evolutionary biologist at the University of Michigan, and her colleagues had revealed that Polistes fuscatus, which has variable facial markings, is face-specialized, or recognizes faces better than it does other visual stimuli. Tibbetts has found that P. fuscatus wasps use face recognition to maintain dominance hierarchies in their colonies. Wasps of sister species P. metricus, on the other hand, have plain faces and do not exhibit face-specialization.

In order to probe the brain activity that separates face specialization from face learning, Tibbetts, Iowa State University biologist Amy Toth, and Berens, then a PhD student in Toth’s lab, compared genes expressed in the brains of both wasp species after a face-recognition exercise.

For each species, the researchers trained one group to distinguish between patterns and another group to distinguish between P. fuscatus faces. For the “faces” group, they put each wasp in a two-pathway maze with an electrified floor, where each path led to a chamber containing an image of one of two wasp faces. “At one end, associated with one of the faces, we block the electricity so it’s sort of a safe zone for the wasps to go to,” Berens explains. By 40 trials, the wasps had learned to recognize the face associated with safety and escape the shock, proving that they could distinguish between the two images. The researchers trained another group of wasps to recognize patterns and repeated the experiments for both species.

See “A face to remember”

They found that the two species were equally good at recognizing patterns, but as expected, P. fuscatus better fled shocks when the maze contained faces than when it contained black-and-white, abstract patterns, such as a bullseye. P. metricus, on the other hand, correctly identified patterns more often than faces. 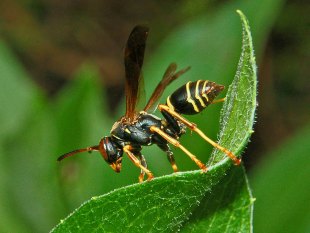 Polistes fuscatusWIKIMEDIA, HECTONICHUSNext, the researchers freeze-killed the wasps and analyzed the mRNA composition of their brains. Within each species, they compared the expression of transcripts from face-trained and pattern-trained wasps to identify those that were either up- or down-regulated between face and pattern training.

The researchers also compared these so-called differentially expressed transcripts between the species. They found that there was no overlap between differentially expressed transcripts of the two species, “which I think we were sort of surprised by,” Berens says. “It appears that there is some distinct molecular changes to brain gene expression during face specialization compared to face learning in paper wasps,” she adds.

The expression of different genes in the brain suggests that distinct groups of neurons, and/or different numbers of those neurons, may be involved in face recognition and specialization, Cornell evolutionary biologist Michael Sheehan, who did his PhD research in Tibbetts’ lab and is currently collaborating with Toth but was not involved in the current work, tells The Scientist.

“There’s probably something different that is going on in their brain when they see a facial image, which is similar, actually, to what happens in humans and some other species of vertebrates,” Sheehan says of P. fuscatus. In humans, specialized brain regions are devoted to facial recognition, and some evidence suggests that this might also be true in sheep. “We don’t necessarily know yet whether that’s the case in wasps, but this data suggests that there are differences in brain activity.”

Although the two species express altogether different genes when recognizing faces, gene ontology (GO) analysis suggested that those genes may have some overlap at the functional level. For instance, some converged on oxidoreductase activity and G-protein coupled signaling.

“What’s nice about this paper is it doesn’t look at one or two genes; it looks at the whole pattern, but now the questions is putting that into the context of which neurons are actually lighting up,” Sheehan says.

A.J. Berens et al., “Cognitive specialization for learning faces is associated with shifts in the brain transcriptome of a social wasp,” Journal of Experimental Biology, doi:10.1242/jeb.155200, 2017.