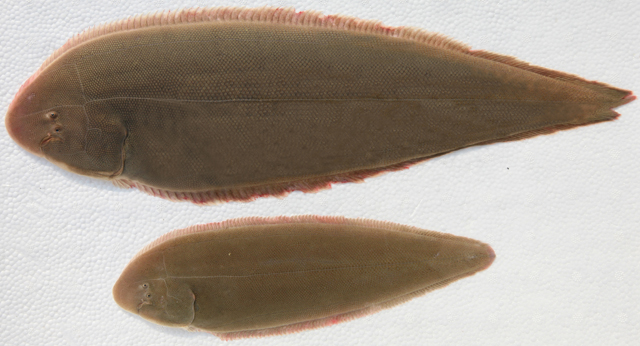 In flatfish like the half-smooth tongue sole (Cynoglossus semilaevis), males have two Z chromosomes, while females have a Z and a W. Researchers have sequenced the genomes of both a male and a female tongue sole. The assemblies were published in Nature Genetics this week (February 2).

An international team sequenced one male (ZZ) and one female (ZW) tongue sole separately, annotating 21,516 protein-coding genes. The researchers identified sequences specific to the W chromosome by subtracting the male genome assembly from the female one. They found that transposable elements represented less than 6 percent of the tongue sole genome—much less than other vertebrates. They also compared gene expression before and after metamorphosis, identifying genes involved in the transition from a symmetric to...

“The evolution of sex is one of the major transitions in evolution that has significantly enhanced the adaptation ability of the species,” coauthor Guojie Zhang of China’s BGI said in a statement. “However, our knowledge of sex determination mechanisms is still very limited. Investigation of the molecular mechanisms underlying this process will . . . increase our knowledge [of] how genome evolution drives species diversification and diversity.” 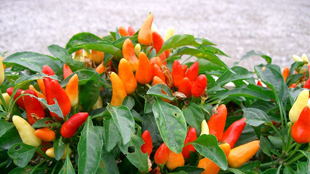 Hot peppers (Capsicum annuum) are used around the world to spice up culinary dishes. An international team of researchers sequenced the genome of a pepper variety called the Criollo de Morelos 334. Their work was published in Nature Genetics last month (January 19).

The team compared the pepper’s genome to the those of three other pepper cultivars, as well as to the tomato—hot pepper’s close relative. Though the hot pepper and tomato genomes contained a similar number of protein-coding genes—approximately 35,000—the pepper genome was about four times larger than the tomato genome. The researchers found that the much larger pepper genome size was likely due to the accumulation of repetitive elements—specifically, Gypsy family elements. They also examined the genes that produce capsaicinoids—the compounds that give the peppers their punch—and discovered that less spicy peppers appeared due to a mutation in one of the enzymes in the biosynthetic pathway. 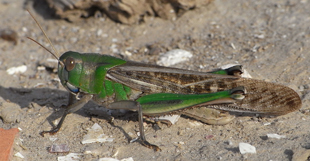 Migratory locusts (Locusta migratoria) wreak agricultural havoc. Swarms arise quickly, they can travel long distances, and individual locusts can eat their body weight in food daily. A team of researchers from the Chinese Academy of Sciences and BGI published a draft genome for these pests in Nature Communications last month (January 14).

The team sequenced the whole genome of a single female locust. They assembled the 6.5 Gb genome—the largest animal genome sequenced to date—and predicted more than 17,300 protein-coding genes. In their paper, the researchers suggested that “the proliferation of a diverse range of repetitive elements is the main reason for the large size of the L. migratoria genome.” About 60 percent of the genome is composed of repetitive elements, and the locust’s introns are more than 10 times longer than those of most other insects. The investigators also found that gene families related to energy consumption and feeding were expanded relative to other insects.

The researchers wrote that hundreds of locust genes might make good targets for insecticides, and that “the L. migratoria genome sequence offers new insights into the biology and sustainable management of this pest species, and will promote its wide use as a model system.” 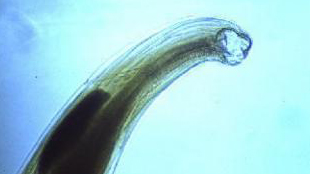 Hookworms (Necator americanus) enter the human body through the skin, and then make their way to the intestine, where they can live for years, feeding on human blood and causing health problems like anemia and malnutrition—especially in children and pregnant women. A group of researchers led by Makedonka Mitreva of Washington University School of Medicine in St. Louis, Missouri, has sequenced the genome of this parasite. Their work was published last month (January 19) in Nature Genetics.

The researchers sequenced DNA and RNA from hookworms grown in hamster intestines. They predicted 19,151 protein-coding genes. The team compared the transcriptomes of hookworms at different stages—the infective and parasitic stages—and identified 1,948 differentially expressed genes, which may represent new therapeutic targets. Based on genomic data, the researchers also developed a microarray containing predicted N. americanus proteins and used it to test immunological reactions of patient serum.

“We now have a more complete picture of just how this worm invades the body, begins feeding on the blood and successfully evades the host immune defenses,” Mitreva said in a statement. “This information will accelerate development of new diagnostic tools and vaccines against the infection.” 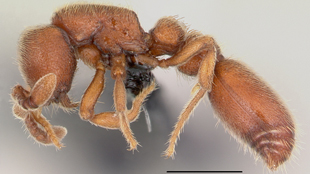 The clonal raider ant (Cerapachys biroi) is different from many social insects in that its groups do not have a queen. Instead, the workers switch between reproducing asexually and caring for the next generation. The ant’s genome was sequenced and published in Current Biology today (February 6).

The researchers sequenced the genomes of four clonal lineages of C. biroi. They determined that the C. biroi genome is one of the smallest ant genomes, and identified 17,263 protein-coding genes, including more genes for odorant receptors than found in any other sequenced insect, suggesting that odorant cues are important in the ant’s life cycle.

The researchers also examined genes related to the switch from reproduction to foraging in other social insects—such as Vitellogenin (Vg), which is an egg yolk precursor protein necessary for reproduction, and Foraging (For), which is involved in the transition to foraging behavior. They found that these conserved genes were dynamically regulated in clonal raider ants. “Cerapachys biroi therefore has great potential to provide novel insights into the regulation of gene networks that underlie reproductive division of labor in insect societies,” the authors wrote in their paper.