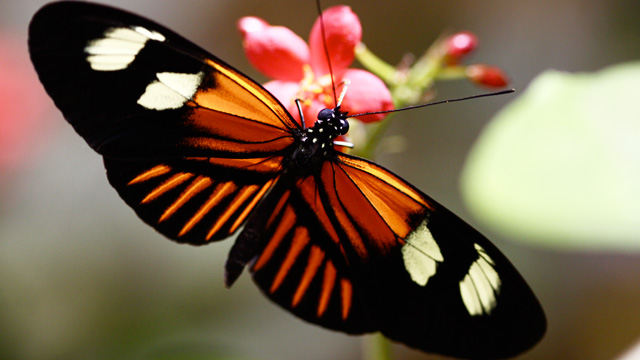 Interesting fact: The Heliconius butterfly genus contains several of nature’s most striking examples of mimicry. Using the genome sequence of the “common postman” butterfly, H. melpomene, as a reference, an international consortium of researchers found that the nearly identical wing patterns of H. melpomene and other mimics such as, H. timareta and H. elevatus, were achieved through hybridization—a very rare phenomenon in animals.

Interesting fact: Exome sequencing of 112 prostate cancer tumors revealed what could be a distinct molecular subtype involving mutations in SPOP, a gene involved in transcriptional repression. Mutations in SPOP are present in up to 15 percent of... Interesting fact: The Southeast Asian liver fluke, Opisthorchis viverrini, is a flatworm parasite that infects the biliary and pancreatic ducts of humans and other mammals and can predispose those who are infected to a rare and lethal bile duct cancer known as Opisthorchis viverrini–related cholangiocarcinoma (CCA). Through whole exome sequencing of eight CCA tumors, researchers turned up 10 new genes previously unassociated with the disease that regulate histone modification, genome stability, and G protein signaling.

Interesting fact: Although the fist draft of the chimpanzee genome was published back in 2005, subsequent in-depth analyses of the chimp genome has since shed many insights into the evolution of the species, as well as its primate relatives. A recent comparison of the human genetic map with that of the chimpanzee—constructed using sequence data from 10 Western chimpanzees—revealed that although recombination rates are similar between the two species, recombination hotspots are markedly different. Interesting fact: The Chinese silver grass is an ornamental plant that’s closely related to staple crops such as corn, sorghum, and sugarcane. Using the genome sequence of the sugarcane as a reference, two independent groups of researchers created rough maps of M. sinensis’s 19 chromosomes, which will be useful in understanding the genetic basis of the plant’s desirable traits. The analysis also revealed that M. sinensis originated as the result of a duplication event in the sorghum genome. The full genome sequence of M. sinensis is expected to be published in the near future.