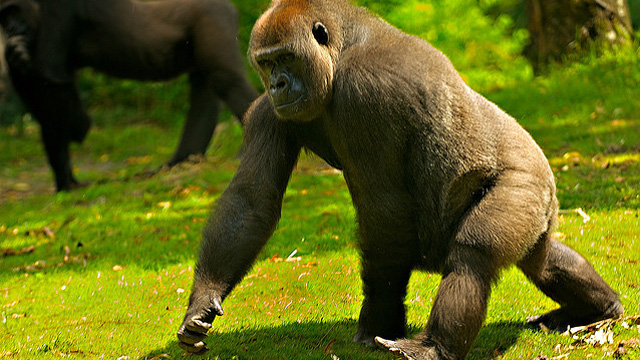 Interesting fact: An analysis of the genome of a 30-year-old female western lowland gorilla named Kamilah from the San Diego Wild Animal Park is poised to offer new insights into the evolution of our second closest living relatives as well as the Great Apes in general. Already, the draft gorilla genome has revealed around 500 genes that have been evolving on the fast track in parallel in gorillas, chimpanzees, and humans, particularly those involved with hearing. Surprisingly, around 15 percent of the gorilla genome is closer to that of humans than to chimpanzees. The analysis also confirms that the human, gorilla, and chimpanzee lineages diverged around 10 million years ago, while the extant eastern and western gorilla species diverged around half a million years ago.

Interesting fact: In 2008, archaeologists working at Denisova Cave in the Siberian Altai Mountains excavated a bone fragment that appeared to come from the pinky finger of a female child who lived between 50,000 and 30,000 years ago. An analysis of nuclear and mitochondrial DNA revealed the child was a member of an extinct hominin group, called the “Denisovans,” which shared a common ancestor with modern humans and Neanderthals about one million years ago. Although a rough draft of the complete genome published in December 2010 revealed clues about the origin of this new human species, scientists, including renowned ancient DNA expert Svante Pääbo from the Max Planck Institute for Evolutionary Anthropology, are currently working on refining it and have recently made available the first high resolution genome sequence of the Denisovan child on the Web. Interesting fact: Ichthyophthirius multifiliis, or Ich, is a protozoan parasite that infects freshwater fish and causes white spot disease, characterized by the appearance of white spots, or cysts, in the skin and gills that lead to irritation, respiratory problems, and death. Because of a lack of preventive measures and effective treatments, white spot disease is devastating to the aquaculture industry. Researchers hope that detailed knowledge of the Ich’s genome, in particular its metabolic pathways and surface protein-encoding genes, will lead to effective vaccines and treatments.

Interesting fact: Sometime in the mid-1990s, a female Tasmanian devil developed a strange and fatal facial cancer. Two decades later, the transmissible parasitic cancer has wiped out around 70 percent of wild Tasmanian devil populations and threatens the marsupial species with extinction. To get a handle on the genetics of this aggressive cancer and develop effective cures, scientists sequenced the genomes of cancerous cells obtained from two Tasmanian devils and compared them to the sequences of noncancerous cells. They identified more than 17,000 somatic mutations unique to the cancer, and established that all the DFTD cases arose from the single female. Interesting fact: It’s one of the most intriguing murder mysteries of all time. A middle-aged man about 5 foot 5 inches tall dropped dead in the Ötztal Alps nearly 5,300 years ago—presumably from a blow to the head and a fatal arrow wound. But now, an analysis of the Iceman’s whole genome reveals that, while living, Ötzi may have suffered from arteriosclerosis, Lyme disease, cavities, and lactose intolerance. Additionally, the study revealed that Iceman’s closest living relatives are found in the islands of Corsica and Sardinia.