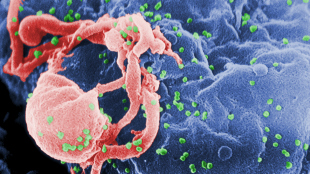 WIKIMEDIA, C. GOLDSMITHLike other retroviruses, the genetic material of HIV wedges itself into the genome of its human host. While antiretroviral therapies are effective at repressing HIV, they don’t eliminate the integrated virus, which can lie low in a latent state and reactivate if the treatment is stopped. In a study published today (July 21) in PNAS, researchers take advantage of the snipping precision of a genome-editing technique to cut HIV out of the human genome.

“They looked at it in several different systems,” said Daniel Stone, a staff scientist at the Fred Hutchinson Cancer Research Center in Seattle, Washington. “It’s really convincing that the approach has promise. The next question is, how do you deliver this?”

The researchers, led by Kamel Khalili at Temple University in Philadelphia, Pennsylvania, used the CRISPR/Cas9 genome-editing system to excise HIV from several human cell lines, including microglia and T cells....

“We were extremely happy with the outcome,” Khalili told The Scientist. “It was a little bit . . . mind-boggling how this system really can identify a single copy of the virus in a chromosome, which is highly packed DNA, and exactly cleave that region.”

His team showed that not only could Cas9 excise one copy of the HIV genome, but—operating in the same cell—it could also clip out another copy lurking in a different chromosome. Often, Khalili said, a cell can have several copies of latent HIV distributed across various chromosomes. “Most likely the technology is going to clean up the viral DNA” in a cell, he said.

Additionally, Khalili’s group reported that the gene-editing method also prevented subsequent HIV infection. That’s something “nobody has shown before,” Stone told The Scientist.

One limitation of the CRISPR/Cas9 approach is that it can chop up unintended regions of the genome, producing so-called off-target effects. Khalili’s group performed whole-genome sequencing to look for off-target effects, but didn’t find any. T.J. Cradick, the director of the protein engineering core facility at Georgia Tech, said that a more thorough analysis of potential off-target effects is still required to make sure nothing has been overlooked. Nonetheless, “latent HIV provirus is a very exciting target and . . . a very promising way forward,” said Cradick, who did not participate in the study.

Koyanagi’s group is now working on a different CRISPR approach to “flush out” HIV, one in which the system activates the latent HIV, which is later eliminated with antiretroviral therapies.

The challenge to any kind of CRISPR approach is the delivery. “Latently infected cells are one in a million,” said Premlata Shankar, who studies HIV at the Texas Tech University Health Sciences Center. It may be difficult to administer a genome-editing-based therapy that could find those cells. Shankar said that the technology looks promising and that the data are “amazing,” but “you need a delivery strategy.”

Khalili has now set his sights on that particular challenge. He said his group is working to develop a nanoparticle delivery vehicle, and he hopes to be able to test it in a mouse model soon. “We have to optimize the system,” he said. “I think we have enough in vitro cell culture data and expertise to justify moving on to the next step.”