Ginkgo biloba trees that first sprouted as the Black Death ravaged Europe in the 1300s—and are still thriving—appear to have immune systems just as active as in trees only a couple of decades old. A new study, published yesterday (January 13) in PNAS, details how having an enduring defense system contributes to the tree’s seemingly ageless life.

Ginkgo, as a species, has changed very little over its 270-million-year tenure, with individuals living more than 1,000 years. In most cases, these trees don’t appear to die of natural causes, leading scientists to investigate how they achieve such impressive lifespans.

The study, performed by researchers from the United States and China, conducted a genetic analysis within the vascular cambium, the layer of stem cells between the bark and the inner wood of the trunk. They discovered that genes responsible for the tree’s immune response don’t diminish in activity over time as they do in other organisms, providing the antioxidants, immune cells, and hormones that allow the tree to fight off pathogens and stressors throughout its life.

“In humans, as we age, our immune system begins to start to not be so good,” senior author Richard Dixon of the University of North Texas tells The New York Times. “The immune system in these trees, even though they’re 1,000 years old, looks like that of a 20-year-old.”

In addition to enduring an immune response, the trees maintain healthy leaves and produce quality seeds, even after hundreds of years.

See “Mechanism Behind Extreme Longevity in Some Plants”

Although its immune system seems exempt from senescence, the biological phenomenon of deteriorating cellular function with age, a ginkgo’s rings shows its age in more ways than one. As the tree ages, the genes that control the thickness of the rings begin to slow down, meaning that ginkgo trees have thinner rings later on in their lives as growth slows. For many other trees, old age is spent on trunk expansion, even after it reaches its maximum height.

“Aging is not a problem for this species,” plant physiologist Sergi Munné-Bosch of the University of Barcelona who was not involved in the study tells Science. “The most important problem that they have to deal with is stress.”

Moving forward, the researchers will investigate the mutation rates of these immune genes to understand the resilience of ginkgo trees better. 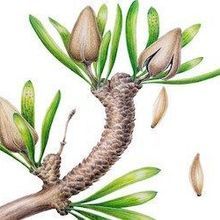