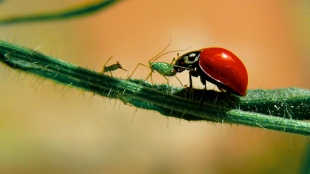 A ladybug munches on an aphid.FLICKR, CREATIVE COMMONS, ANDERSON MANCINI

Bt cotton is a genetically modified crop that produces an insecticidal protein toxic to the devastating cotton bollworm pest, reducing the need for broad-based sprays that can kill beneficial arthropod predators like ladybirds and spiders. Now, researchers have found evidence that when Bt crops replace insecticide spraying, predator populations bounce back and provide effective biological pest control, for the Bt crops and possibly surrounding fields. The result comes after a 20-year, 2.6 million hectare study in rural China, published today (June 13) in Nature.

“This study is likely to be a landmark in its field because of its extraordinary scope,” said Bruce Tabashnik, an entomologist at the University of Arizona who did not participate in the study, by email. “The study links information about Bt cotton adoption, insecticide use, and abundance of predators and their prey in...

Bt cotton, which derives its pest toxicity from the bacterium Bacillus thuringiensis, was widely adopted in China in 1997 after the cotton bollworm became resistant to traditional insecticides. Taking advantage of the natural experiment, ecology researcher Nicolas Desneux of the French National Institute for Agricultural Research and colleagues tapped a network of northern Chinese farmers that allowed them to review data on 36 sites dating back to 1990, when insecticide spraying was the norm.

“It’s a very powerful tool to monitor population dynamics of pests and natural enemies,” said Desneux. “We were able to compare how it was before, during, and after the planting of Bt crops.”

They found that across all sites as insecticide spraying declined, predatory arthropod populations rose, bringing down populations of aphids, insects that consume and damage crops by carrying viruses . In addition, the team also studied experimental Bt cotton plots, and found that where predator populations were high in the Bt cotton, they were correspondingly high in surrounding peanut and soybean plots, suggesting the benefits of increased predators spilled over to neighboring crops.

More natural predators in the ecosystem help to control pests in the long-term by avoiding outbreaks of resistant pests that often accompany insecticide spraying. Generalist predators are adaptable, can be widely dispersed, and prey on several different pests, providing natural biological pest control.

Furthermore, if the spill-over effects seen in their test plots also applies to crops commonly planted alongside Bt cotton in northern Chinese farms, it could confer wide-reaching benefits. But the strategy will only work if Bt crops are not ubiquitous, Desneux noted, because it’s the diversity of crops that alleviates the selection pressure on pests to become resistant to Bt’s insecticide. “To prevent the selection of resistant populations in the pest, we just have to ensure that we still have non-Bt crops in the landscape,” Desneux said.