The World Health Organization warns that a lack of data on how many people have the disease could undermine containment and mitigation efforts in many countries.

The World Health Organization is urging governments to perform more tests for COVID-19 following concerns about underreporting of cases in many countries around the globe. As the number of confirmed deaths due to infections with SARS-CoV-2 passed 8,000 this week, more and more nations have introduced strict measures to attempt to delay the virus’s spread, but the organization warns that assessing the impact of these measures will only be possible with accurate data on the disease.

The message to every government and health authority on the planet right now is “get the capacity, and test, test, test,” Margaret Harris of the WHO coronavirus response team tells Sky News. “If you don’t know you’ve got a fire, you can’t put it out.”

Some countries have been taking a proactive approach to testing. South Korea, which has a population of more than 51 million people, rapidly implemented the largest testing program in the world after cases began soaring in February, screening people who had any contact with infected individuals as well as anyone with symptoms, and setting up drive-through testing sites.

According to Our World in Data, a project run by researchers at the University of Oxford in the UK, South Korea has so far carried out more than 285,000 tests—the equivalent of 5,500 tests for every million people in the population. With the national number of COVID-19 cases stabilizing at around 8,400, South Korea’s experience shows that “diagnostic capacity at scale is key to epidemic control,” Raina MacIntyre, an emerging infectious disease scholar at the University of New South Wales, Sydney, tells Science.

South Korea is now sending testing kits to other parts of the world. The Korea Times reported yesterday (March 17) that more than 50,000 tests had been exported to the United Arab Emirates (UAE), a country of around 9.5 million people that is overseeing a largescale testing operation for COVID-19 among its population. Bahrain and Iceland, which have populations of around 1.5 million and 350,000 respectively, are also working on screening large numbers of people. 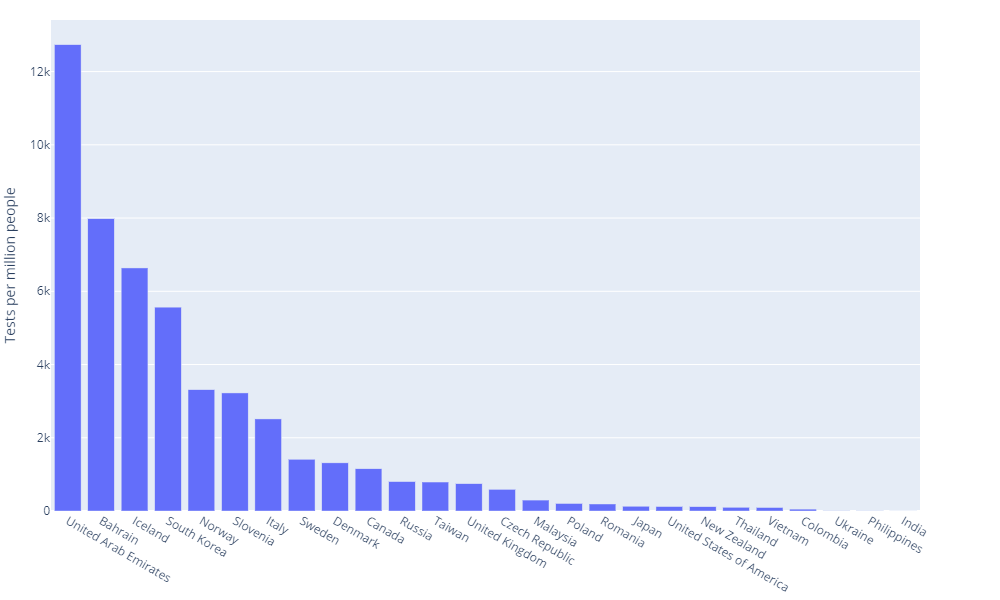 Estimates of the number of tests carried out in each country are based on reports from March 16 or March 17 for all countries except India, which last updated its test numbers on March 13.
data from our world in data

Many other countries have taken a less exhaustive approach. The UK, for example, announced at a press conference last week that it would only test people who were admitted to hospitals—a move criticized by many researchers and health workers, The Guardian reports. As of Tuesday, the country had carried out around 50,000 tests—fewer than 750 tests per million people in the population. Doctors and other staff working at National Health Service hospitals are not being tested even if they have symptoms, according to The Guardian.

Tim Colbourn, a global health epidemiologist at University College London, told the Financial Times earlier this week that the UK should “follow World Health Organization advice and do massive testing and tracing, as well as social distancing.” Restricting tests to hospitalized patients would make it “difficult to understand how many people are infected and what the likely burden on the health system will be in the coming week.”

Health workers in the US have also raised concerns about undertesting. According to Our World in Data, state health organizations and the United States Centers for Disease Control and Prevention (CDC) have collectively tested about 41,500 people, or around 125 per million people in the population. 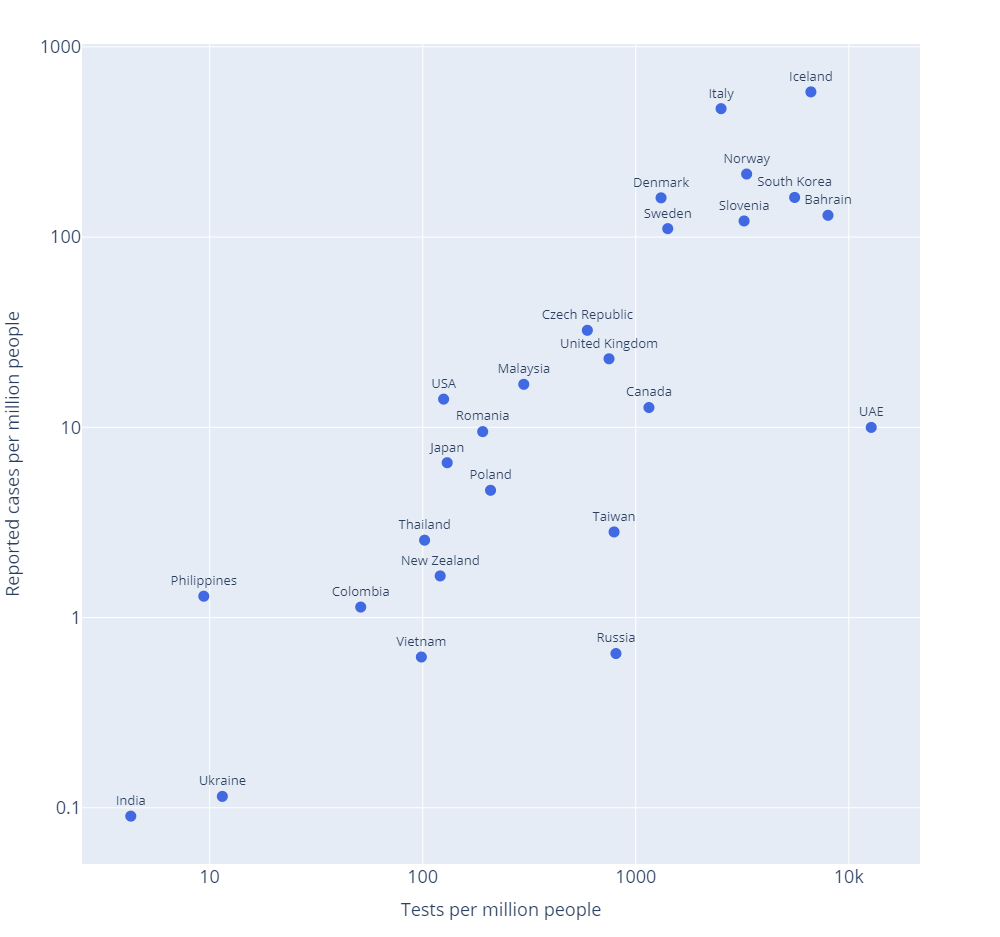 Estimates of the number of tests carried out in each country are based on reports from March 16 or March 17 for all countries except India, which last updated its test numbers on March 13.
TESTING data from our world in data, CASE DATA FROM ECDC

A statement from the WHO on March 16 noted that a total of 1.5 million tests had been sent out to 120 countries. Those countries do not include the US, which has chosen to pursue its own testing technologies, according to CNN. Several states are currently reporting shortages of testing kits and supplies.

India, which is reporting fewer than 150 cases of COVID-19, has refused to scale up its testing programs on the grounds that spread of disease has been less severe there than elsewhere. By the end of last week, the country had carried out fewer than 6,000 tests for COVID-19, a testing rate equivalent to just 4.3 tests per million people in the population. The WHO guidance is “premature” for India, Balaram Bharghava, who heads the Indian Council of Medical Research, tells Al Jazeera, adding that there hadn’t yet been reports of community transmission. The call for widespread testing “creates more fear, more paranoia, and more hype.”

But researchers in India, which has a population of 1.34 billion, have expressed skepticism about the claims. “Given the pattern of disease in other places, and given our low level of testing,” Gagandeep Kang, director of the Translational Health Science and Technology Institute, tells Al Jazeera, “then I do think that community transmission is happening.”