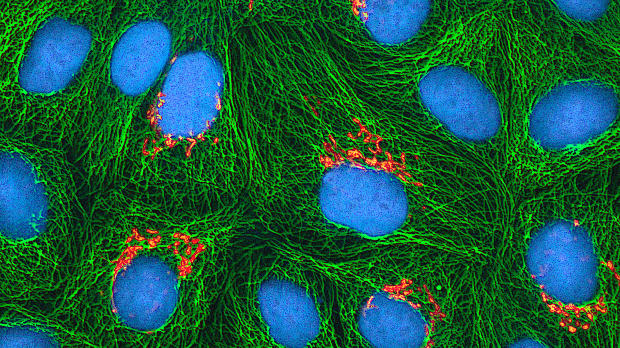 Cultured HeLa cancer cells depicted using fluorescent proteins to illustrate Golgi apparatus (orange) and microtubules (green), with DNA-carrying nuclei counterstained blue.IMAGE COURTESY OF THE NATIONAL INSTITUTES OF HEALTHThree researchers who were instrumental in discovering and developing green florescent protein (GFP), which revolutionized how biologists observe the functioning of living cells, have won the 2008 Nobel Prize for Chemistry. Osamu Shimomura, now at the Marine Biological Institute in Woods Hole, MA, Martin Chalfie, a Columbia University cell biologist, and Roger Tsien, a University of California, San Diego, biochemist will share more than $1.4 million (USD) when they officially receive the prize in December. The Nobel committee member who announced Shimomura, Chalfie, and Tsien as this year's chemistry prize winners said that GFP has proven to be a "tiny molecular flashlight" shining light on cellular processes that were long obscured by microscopic darkness.

Shimomura discovered GFP lurking in the body of the bioluminescent jellyfish Aequorea victoria in the early 1960s. Shimomura, who was then a researcher at Princeton University, published his findings in a Journal of Cellular and Comparative Physiology paper in 1962 that has been cited more than 530 times, according to the Institute for Scientific Information (ISI).

Shimomura's discovery was the first in what a Nobel committee spokesperson, speaking after the announcement of the prize, called "three distinct acts" in the rise of GFP as a revolutionary cell biology tool. The next act occurred in the early 1990s, when Chalfie expressed GFP in the bacterium Escheria coli and the worm Caenorhabditis elegans. Chalfie published his findings in a 1994 Science paper, which has been cited more than 2,800 times, according to ISI. The key to Chalfie's work was finding that GFP required neither exogenous substrates nor cofactors to fluoresce, making it an ideal, and non-disruptive tracker of gene expression and protein function in living cells and organisms.

Tsien is widely regarded as the scientist who developed GFP into a robust toolkit for visualizing proteins. By working to understand the mechanisms behind GFP's florescence, Tsien has developed several related proteins that glow in virtually all the colors of the rainbow. His 2004 Nature Biotechnology paper introduced florescent red, yellow, and orange protein tags that can be used to visualize complex molecular interactions occurring within living cells. That paper has been cited more than 450 times, according to ISI.

Jemermy Berg was not the only one to predict that Tsien was in line for a Nobel Prize. Last week The Scientist published a prediction from Thomson Scientific that named Tsien as a possible recipient of this year's prize. Tsien, however, did not triumph in a reader poll generated by The Scientist on the user polling site ZiiTrend. Tsien received 21 percent of the vote (over Harvard nanochemist Charles Leiber and Carnegie Mellon University chemist Krzysztof Matyjaszewski, who got 18 percent and 19 percent, respectively), while the majority of voters chose "None of the above." Shimomura and Chalfie could not immediately be reached for comment.