Digestive infections can wreak havoc on the enteric nervous system, leading to persistent digestive issues. But, if there is an upside to them, it’s that they may steel the gut against future assaults: the intestinal neurons of mice previously infected with either intestinal worms or pathogenic bacteria were more resilient to Salmonella infections, researchers report November 11 in Cell.

Unlike intestinal epithelial cells, whose snappy turnover helps the gut rapidly heal from tissue destruction, intestinal neurons usually suffer lasting damage during infections and inflammatory conditions such as irritable bowel syndrome (IBS) or Crohn’s disease. Since these neurons are important for everything from controlling gut motility to hormone secretion, this damage has enduring and often painful consequences.

Lead study author Daniel Mucida, an immunologist at The Rockefeller University and HHMI investigator, and his colleagues had recently observed that Salmonella infection triggers long-term enteric neuron death in mice. However, they also saw that macrophages in the gut stave off some of that cell death, even though they didn’t kill the bacteria directly. This is a classic example of disease tolerance, Mucida explains—a pathway that doesn’t control how many pathogens are in your body, but rather how the body deals with inflammation and the tissue damage caused by the pathogens.

Since preventing neuronal death during enteric infections could help people with inflammatory gut conditions such as IBS, Mucida says his team wanted to continue to probe how this protection works. So the researchers returned to the Salmonella bacterial infection model they used in their earlier paper, but with a twist: this time, they infected mice with a different type of gut bacteria, waited three weeks for the infection to clear, and then infected the mice with Salmonella.

The mice that had been pre-infected had less neuronal death, more protective macrophages, and improved gut motility compared with mice that were only infected with Salmonella, even though both groups of mice had the same amount of bacteria in their guts during the second infection—suggesting that the initial infection was prompting persistent tissue protection. “The main advance that this paper brings is to show that there is … [a] long-lasting disease tolerance effect induced by infection,” says Mucida.

And this memory-like phenomenon wasn’t specific to bacterial infections. To their surprise, the researchers found that pre-infecting the mice with intestinal worms—a completely different pathogen—triggered “almost identical” neuronal protection by macrophages during subsequent Salmonella infection, even when the bacteria were introduced six months after the worms were cleared. (According to their manuscript, infections of the parasite they used, Strongyloides venezulenesis, last 12 days or less.)

Through the worm pre-infection experiments, Mucida’s group discovered that an additional immune cell type was critical for neuronal protection: eosinophils (so named for the cell’s predilection for taking up rosy pink eosin dye in its speckled granules during traditional cell staining techniques). In fact, the team’s experiments suggested eosinophils were helping coordinate the neuron-protecting macrophages they had observed in their earlier paper: When eosinophils were depleted, there were fewer protective macrophages. The researchers further showed that two key cytokines produced by the eosinophils—IL-4 and IL-13—were essential for orchestrating the neuroprotective macrophages, and that adding these cytokines during Salmonella infection was enough to prompt neuroprotection in the absence of pre-infections. 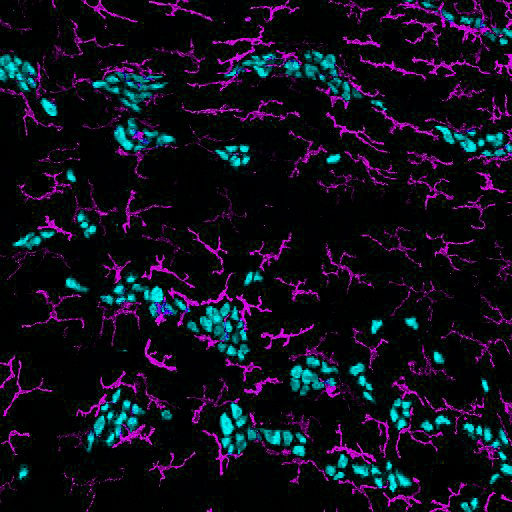 Also surprising, says first author and Rockefeller immunologist Tomasz Ahrends, was finding that worm infection in the gut actually reprogrammed the bone marrow to pump out more eosinophils for weeks after the infection. However, changes in the bone marrow alone weren’t enough to protect neurons in the gut—they had to happen in conjunction with local changes in the gut environment. Ahrends says he’s now doing experiments to see if the local tissue changes alone are enough for long-lasting protection.

McGill University immunologist Nargis Khan, who was not involved with the study, says the paper supports the idea that “you definitely need memory to induce disease tolerance,” in addition to pathogen-specific memory responses. She also says the paper beautifully links disease tolerance with how microbes in the gut can regulate bone marrow immune cell development, and she wonders whether the changes in the bone marrow during gut infection might also be able to promote disease tolerance during subsequent infection in other tissues, such as the liver or lungs.

“The fact that infection can be cleared for months, and you still see that protective effect that this infection had” goes against the dogma of innate immune cells not having memory, says Ahrends—although he notes that dogma is already being by turned on its head by work on trained innate immunity: the observation that prior infections can cause epigenetic changes in innate immune cell precursors in the bone marrow, leading to improved pathogen control during subsequent infection.

Mucida notes that the phenotype they discovered is a little different from trained innate immunity, since they don’t know whether epigenetic changes are occurring in the bone marrow, and because the long-term effects are tissue-protective, rather than pathogen-killing. Indeed, Ahrends says the work supports a growing change in how researchers view the immune system. “The primary goal is not to fight pathogens,” he says. Rather, “the immune system is there to maintain homeostasis.”

A trip to the pet shop

Mucida says finding disease tolerance in laboratory mice made the team wonder whether the phenomenon also occurs outside the vivarium. So the researchers repeated their experiments using test subjects with substantially more real-world experience than their lab-raised counterparts: pet mice for sale at a local pet store.

“When I analyzed these mice, I saw tons of worms,” says Ahrends. Accordingly, these mice had higher levels of eosinophils and macrophages, and they lost fewer neurons than the lab mice upon Salmonella infection—suggesting that a lifetime of exposure to intestinal pathogens had left their guts fully prepared to deal with assaults from gut bugs.

“I thought it was really, really cool that they analyzed store-bought pet mice,” says Radboud University Medical Center translational cardiovascular immunologist Siroon Bekkering, who was not involved with the study. She says that for this type of study, it’s a great addition to the “specific pathogen-free” mice most biomedical researchers use in their labs, as their non-sterile life more closely models the constant bombardment with potential pathogens that people experience in their daily lives.

“I would really be interested to see if this has some sort of therapeutic potential [in humans],” says Bekkering. However, she cautions that people shouldn’t rush out to get worm infections to preemptively protect their gut neurons from future bouts of food poisoning. She says she wonders if instead of infecting people with helminths, exposure to certain parts of the worms would be enough to trigger the neuroprotective effect—almost like a disease tolerance–inducing vaccine.