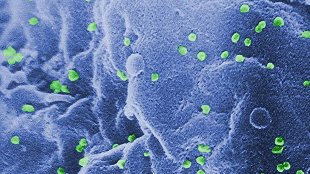 HIV budding from a lymphocyteWIKIMEDIA, CDCGut microbes in patients with HIV differ from those in uninfected individuals—and may promote disease progression, according to a paper published today (July 10) in Science Translational Medicine. The report suggests that HIV infection in the gut actually selects for bacteria that promote immune dysfunction, even if a patient receives antiretroviral treatment.

“What’s nice about this paper is that it shows there is a stereotyped dysregulation of the microbiota in HIV patients, meaning there is a signature to the change,” said Dan Littman, a professor of molecular immunology at New York University’s Langone Medical Center, who was not involved in the study.

Furthermore, “they have gone on to show that the degree of dysbiosis and the type of bacteria present correlate with some of the important markers of immune activation and disease progression,” added Danny Douek, an immunologist at the...

HIV is a retrovirus that primarily infects and replicates inside immune cells and can ultimately lead to immune dysfunction (AIDS). Because HIV makes a home inside immune cells, “it likes to replicate in the context of inflammation,” when such cells are rapidly proliferating, said Mike McCune, Chief of the Division of Experimental Medicine at the University of California, San Francisco, who led the study. Indeed, the major indicator that an HIV infection is progressing towards AIDS is chronic systemic inflammation.

Microbes of the gut, while normally peaceful inhabitants, can also cause inflammation if they leak into the body through the intestinal walls. And, such leakage, or translocation, has been observed in HIV patients.  “We’ve known for a long time that the virus replicates most avidly in the mucosa of the intestine . . . and that leads to a disruption of the immune system in that location,” said Littman. This disruption weakens the mucosal barrier, making it more porous, he explained, and one hypothesis has been that “this increased permeability of the intestinal barrier and the leakage of microbial products . . . would lead to an overall activation of the immune system.”

But while this microbial translocation explains the systemic immune activation, what isn’t clear is why systemic inflammation can sometimes continue in patients receiving antiretroviral treatment and in whom the virus itself may be almost undetectable in the blood.

To find an answer McCune’s team took colon biopsies from untreated HIV patients, patients on antiretrovirals, and healthy people and found that the bacterial communities differed between the three groups. Relative to the healthy controls, the samples from untreated HIV-infected individuals tended to be enriched for members of the Proteobacteria family and depleted for members of Clostridia and Bacteroidia families. Patients infected with HIV that were being treated with antiretrovirals, on the other hand, exhibited a spectrum of microbial communities in their colonic mucosa, some resembling healthy controls, others resembling untreated patients—a result that correlated with the occurrence of systemic inflammation: the more similar a person’s gut microbiome was to that of the untreated patients, the greater immune cell activity and the higher the levels of inflammatory molecules in their blood.

The team also found that the disease-associated microbial communities tended to be particularly abundant in bacterial species that could digest the amino acid tryptophan. Products of this digestion can inhibit the development of certain immune cells, particularly those that produce the cytokine interleukin-17 (IL-17). “IL-17 is critically important for the maintenance and integrity of the mucosal boundary in the gut,” explained McCune. Indeed, HIV is thought to promote breakdown of the mucosal barrier by activating tryptophan catabolism and suppression of IL-17–producing cells as they replicate in the gut.

“Very few bacteria can catabolize tryptophan,” explained McCune, so finding these tryptophan-digesting bacteria at the site of HIV replication was “a surprise,” he said. It suggests that while HIV initiates the immune dysfunction at the mucosal barrier, the bacteria recruited there during infection potentially perpetuate the dysfunction, which in turn would promote systemic inflammation and provide the virus with an ideal environment for replication. Remarkably, McCune said, “[HIV] has worked out just the right conditions to promote inflammation created both by the host and by the bacteria living in the host.”