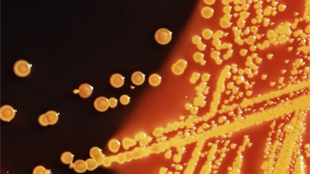 E.coliWIKIPEDIA, CDCWe all have trillions of microbes inside our guts, which outnumber our own cells by a factor of 10. Now, a team from Washington University School of Medicine in St. Louis (WUSTL) has shown that this microscopic community is extraordinarily stable. In healthy people, once these microbes are established in the gut early in life, presumably due to contact from close family members, most strains are unwavering in their presence, staying in the gut for decades or longer.

“We have this part of ourselves that’s assembled from outside but stays inside for decades and decades, and it contributes to our uniqueness as individuals and our health,” said WUSTL’s Jeffrey Gordon who led the study.

Although the team only studied healthy adults, their results have big implications for our understanding of disease, Gordon added. Many studies have shown that conditions such as obesity or autoimmune disorders are associated...

If these communities are usually steady, it may be possible to monitor a person’s health by analyzing stool samples each year, said Jacques Ravel, a microbiologist from the University of Maryland School of Medicine who was not involved in the study. “This is the future of medicine: a genome once and a microbiome at each annual exam.”

While other studies have tracked changes in the gut microbiota over time, Gordon’s team wanted to get a more detailed picture. “In the past, people have gone down to the species level,” said former postdoc Jeremiah Faith, now at the Icahn School of Medicine at Mount Sinai. “But everyone has E. coli in their guts for sure. The difference between those E. coli strains can be pretty big,”

Current techniques have such a high error rate that it can be unclear if a variation in sequence is due to the presence of a new strain or a mistake in the sequencing. Faith surmounted this problem by developing a new technique called LEA-Seq (low-error amplicon sequencing). It tags a small fraction of the DNA fragments within a sample and makes exponentially more copies of them than traditional sequencing methods, so that each can be sequenced many times over greatly improving the accuracy of the resulting sequences.

Two years ago, Faith first tested his new technique on stool samples collected from a single volunteer on multiple occasions. “I was completely floored,” he said. “Over the course of 3 months, they had virtually identical sets of microbes.” This pattern held when he looked at 175 stool samples, taken from 37 healthy US adults over 5 years.

On average, each volunteer harboured around 200 strains representing 100 different bacterial species. More than 70 percent of these stayed the same after a year, and 60 percent remained across the entire 5-year span. “If you extrapolate from the rate of change, it looks like the strains we harbor in our guts last decades or maybe a lifespan,” said Gordon.

The team also found that people share gut microbe strains with relatives, but not unrelated people. This suggests that family members, through touching each other or sharing the same environments, are colonized by the same microbes during their early years. “There’s an early period of assembly for the gut microbe community, and your physiology as an adult is likely a legacy of this event,” said Gordon.

But this stability can be disrupted. During the study, four of the volunteers lost around 10 percent of their weight through a special liquid diet, and their microbe communities very quickly became less stable. When the team analyzed all the volunteers, they saw that those whose weight fluctuated the most over time had the least stable gut microbes. “This shows that strains in our gut, and how they change over time, could act as a biomarker that helps us track our health status,” said Faith. “Now, we need to know which strains are good or bad.”

Through studying the vaginal microbiome, Ravel has similarly shown that the community’s stability is related to its host’s health, and that some bacterial strains act as lynchpins for the entire community. “This is a very important concept that might apply to all microbiomes,” he said.

Gordon now wants to understand how gut microbes manage to be so stable, especially since the gut is continually being washed by fluid.  “What factors are necessary for this massive collection of cells to remain [in] a self-renewing organ, while also being nimble and adaptive?” he asked. “A tremendous amount of work is going into addressing that question.”