Hagfish are notorious for their defensive slime, which can swell from a small secretion to a carload of goo in a fraction of a second. The slime is made up of a winding web of fibrous protein threads that trap the surrounding seawater, thus transforming it into a malicious mucus that suffocates the gills and jaws of attacking predators.

The biology of this slime has long fascinated materials scientists and evolutionary biologists alike, including Yu Zeng, an evolutionary biologist at Chapman University in California. Zeng and his colleagues decided to focus on the gland cells that produce the fish’s slick substance, and in their September 20 paper in Current Biology, they find that these slime cells differ in size and produce differently sized threads depending on the size of the hagfish, with larger hagfish possessing much larger thread-producing cells than would be expected based on body size alone. These larger cells produce longer and thicker threads, which lead to more viscous slime capable of deterring even the most imposing underwater predators. Zeng posits that the cells’ size may have evolved to fend off the different predators of hagfish – both large and small.

The Scientist spoke with Zeng about the new paper and hagfishes in general to learn more about the slimy superpowers of these bizarre deep sea fish.

The Scientist: What interested you in studying the cells of hagfish in particular?

Yu Zeng: Hagfishes are just weird. They’re so distant from our mundane human life because they live in the deep ocean. They don’t have a face, don’t have eyes, and look alien. We know really little about their life history, so anything about hagfish is, by default, interesting.

In this particular project, we study the morphology of the cell that generates this thread. The thread is an essential component for their defensive slime, [and] is also a really, really weird structure.

The bigger picture is. . . . The larger hagfish it would be eaten or attacked by larger fishes. And then the smaller species would be attacked by smaller species of predator, and then they live in different depths of the ocean. . . . We’re wondering if the cell[s] that produce the threads, and then the threads themselves, change with the body size of the hagfish. In other words, do bigger hagfishes have a stronger armor against predators?

TS: About your research process: did you encounter any challenges?

YZ: I can start with the simple challenge that is access to specimen[s]. . . .You can buy freshly captured specimens from fishermen, . . . but there is only a limited number of species [available this way]. . . . If we want to compare between a lot of species, then we have to sample from museum specimens. Those are preserved specimens captured by accident during surveys throughout history. Some are tens of years old. Some are fragile. So, in this study, my co-authors studied the one[s] in the museum, [and] sampled the glands from pickled specimens.

The second challenge is a little more like mental, because every time I see them, it just reminds me of those alien movies. They don’t have a lower jaw, so when they open their mouth, it folds and unfolds from inside out with two lateral jaws. It does not open up and down but unfolds. So it’s really weird.

And I’d say a third challenge is to connect all the dots across different levels. In this particular study, we’re connecting dots about body size, and about the size of the cell that makes the thread, and then about the thread. So, I have to develop models to connect these different levels. The whole animal is one level of things—that’s the whole animal interacting with predators. And then there is [the] cell—the physiology and mechanics. . . . And then the third level, the threads.

I [had] to develop a model to help us estimate the size of the thread, because when we sample the thread, it’s a packed skein inside of the cell. You can’t directly measure the thread because it’s super thin. And it’s hard to take out . . . a thread and then use microtweezers [to] unfold it, unravel it, and then stretch it and measure it. It’s almost impossible. You may break the thread at any stage . . . Then, when I have all this data, I have to write scripts, like computer programs, to do analyses.

TS: Was there anything that surprised you?

YZ: [The] extreme allometry, [which is] basically how cell size change[s] with body size. . . [for the thread-producing cells] this coefficient is larger than any previously documented cells. So that means the cells become really large to produce the threads.

This is surprising because cell sizes are relatively consistent in animals. We show how much the cell scaling exceeds the scaling in other cases, like in [mammalian cells]. [This will] help us understand the flexibility of animal cells and provide some new knowledge about the mechanism that drives cell size evolution.

TS: The paper mentioned that hagfish slime threads are the largest intracellular polymer known. What does that mean?

YZ: That means the cell must be really specialized and . . . when the cell grows in size, becoming extremely large, it needs a more powerful supply system. It takes a lot of energy to grow the protein. . . .   [The cell also] needs other mechanism[s] to be structurally rigorous. . . [so it] won’t be easily deformed.

We suspect the growth of these glands, the thread cells, are supplied by other cells around [them that] pump energy towards [them] and materials to make new threads. Then the majority of the cell is taken up by the thread. . . . The cell nuclei [are] really, really small, . . . less than five percent of the volume. So that means the cell has given up a lot of other organelles to be able to make the thread. 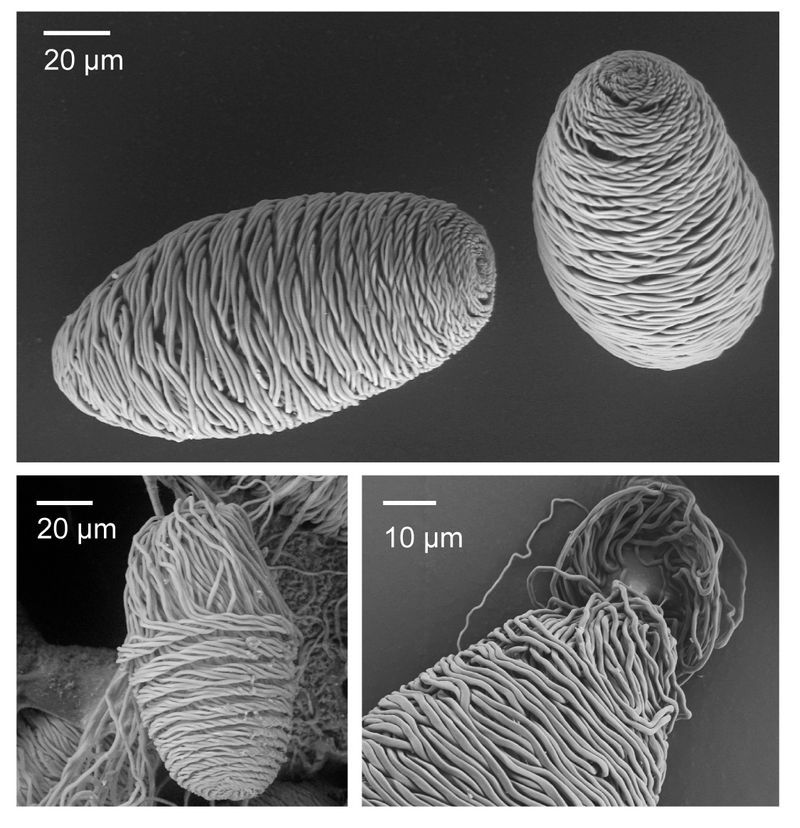 TS: Where do you see the future of this research going? What would you like to explore?

YZ:   This paper is part of a project where we study how hagfish make threads. I’m trying to understand how this whole package or skein of threads develop—how it grows from small to large, and how it’s formed, because to make a skein, [the thread has] to have a lot of loops, and [the cell has] to pack the loops efficiently. How is the packaging accomplished within a single cell? That’s one of the ongoing directions.

On a different level, I would be interested in understanding the evolution of the thread. What’s the origin of this cell? What is the earlier form? Because anything you look [at] that is so complex and specialized has a simple, ancestral form. It’s derived from something that is not as alien, not as specialized, something more normal. That transitional process from normal, simpler, less specialised form to this specialised form is interesting. And it’s the Mars shot. The first one I mentioned is probably the moon shot, and then this one is the Mars shot. To understand the origin of these complex structures involves a lot of fields—cell biology, biomaterials, biomechanics, geometrics, computer science, material science—and a lot of programming to be able to bridge all these fields together.