Prominent turtle conservationist Richard Vogt of the National Institute of Amazonian Research was stripped of his Distinguished Herpetologist Award the day after he received it at the Joint Meeting of Ichthyologists and Herpetologists, recently held in New York. The Herpetologists’ League revoked the honor on Friday night (July 13) in light of the images of female students conducting field research in bathing suits that Vogt displayed while accepting his award.

According to Motherboard, Jessica Ford, a graduate student at McGill University who attended Vogt’s lecture on Thursday (July 12), says, “a few people walked out, but most people either were flabbergasted or nervously laughed.”

Some of the photographs of the bikini-clad students had blue boxes placed over the women’s torsos by the conference’s audiovisual team. Vogt was unaware of the changes.

The controversy garnered attention when several attendees tweeted about the unacceptable content of Vogt’s award speech. Other herpetologists brought up past instances of Vogt’s unprofessional behavior. Emily Taylor, a herpetologist from California Polytechnic State University who attended the lecture, says Vogt’s been showing such slides “for 20 years,” according to the Democrat & Chronicle.

Henry Mushinsky, the conference committee chairman, tells the Democrat & Chronicle that parts of the images were covered up “to minimize anyone feeling uncomfortable,” as some of the photos were “too revealing.” Mushinky says it’s not uncommon for researchers in the field to wear bikinis or other swimwear, but Vogt’s images were atypical.

The societies at the meeting are putting together a Code of Conduct that the Herpetologists’ League will be signing. Both the League and other herpetologists have claimed Vogt, who has a recently identified turtle namesake, has been known to misbehave towards young, female colleagues. Lori Neuman-Lee, who leads the League’s newly formed diversity and inclusion committee says, “This has provided an opportunity—an unfortunate opportunity—to talk about this,” according to The New York Times. 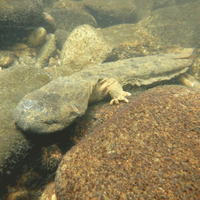 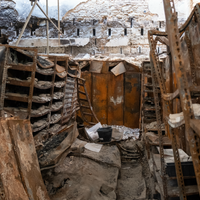