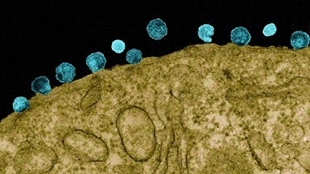 HIV virions budding from an infected T lymphocyte. The Cell Image Library, R. DourmashkinIn response to the initial flood of antibodies the immune system releases upon infection with HIV, the virus shifts the location of sugar groups on its envelope protein to evade detection. But in doing so, the virus creates new glycosylation patterns that can be recognized by different antibodies, which appear to target a much broader range of viruses.

The research, published Sunday (October 21) in Nature Medicine, suggests that focusing on eliciting antibodies with a wide range of different specificities, to both acute and chronic viruses, may be a promising strategy for vaccination.

“We had always assumed the first virus would be special,” eliciting the most broadly neutralizing antibodies, but the new work challenges this assumption, explained Hanneke Schuitemaker, an immunologist at the University of Amsterdam who did not participate in the research.

But sometimes the immune system is successful in generating antibodies that block HIV binding and infection of CD4-expressing cells. Understanding what epitopes the immune system targets to generate such broadly cross-neutralizing responses is a promising area of inquiry by researchers hoping to develop a vaccine against the virus. The most potent class of known broadly cross-neutralizing antibodies recognizes a particular glycan sugar, found at position 332 on the gp120 envelope glycoprotein that facilitates viral entry into cells by binding CD4.

To investigate the evolution of HIV and the antibody responses against it, Penny Moore and Lynn Morris at South Africa’s National Institute for Communicable Diseases of the National Health Laboratory Service tracked the antibody titers of HIV-1-C-infected women. The scientists noticed that as time passed, more patients began expressing broadly cross-neutralizing antibody responses.

Two women, who had high levels of viral replication, produced antibodies that neutralized viruses glycosylated at 332. But the viruses that had first infected the women had no sugar group at 332.

“We were astonished,” said Moore. The infecting viruses were not glycosylated at position 332, but the immune system began making antibodies to target that epitope. The answer, it turned out, had to do with viruses that arose later in infection, which did express this sugar group. About a year into infection, all viruses were glycosylated at 332, at which point the broadly neutralizing antibodies were found at high levels in the blood.

The timing of this switch suggests that viral escape from the first wave of antibodies, which target epitopes found on the initially infecting viruses, had led HIV to carry the glycan group that is susceptible to the broadly cross-neutralizing antibodies. To test this hypothesis, Moore and colleagues combined antibodies generated during acute infection with viruses expressing the 332 glycan epitope. Sure enough, the antibodies were unable to block cell entry, supporting the idea that evolving this epitope enables HIV to avoid the initial wave of antibodies generated in response to infection.

Widening her scope to almost 70 patients, Moore found the pattern—the appearance of glycosylation at 332 only later in infection—repeated in nearly a third of infections. Though rare in viruses establishing infections, glycosylation at this residue is common in viruses from chronically infected individuals, helping to explain how antibodies that target this epitope often neutralize viruses from many different patients.

“This is the first time we’ve really understood that viral evolution itself shapes the antibodies that come out,” said Moore. “Being able to work out the pattern of viral evolution will help us think about designing vaccines,” she added. One strategy that may prove successful could be to provide sequential immunizations with vaccines containing different epitopes, “mimicking what happens naturally” as the viruses evolve, she speculated.

It’s unclear, however, why viruses that initially establish infections tend to not to be glycosylated at this position, but vaccine developers may still have success using this epitope in combination with others, said David Montefiori, a viral immunologist at Duke University who did not participate in the study.

Another lingering question is how new epitopes generate different antibodies, said Schuitemaker—specifically, whether the broadly neutralizing antibodies are produced by the same B lymphocytes that responded to the initial infection, or by different B cells only called into action after the viruses have switched epitopes. “If they’re different B cells, maybe a vaccine could trigger them immediately,” rather than waiting for the virus to evolve, said Schuitemaker.

Of course, it won’t be easy to find the perfect vaccine strategy amongst the constantly shifting interplay between B cells and viruses for vaccine development. “It really blew my mind—how incredibly dynamic the whole system is,” said Moore.