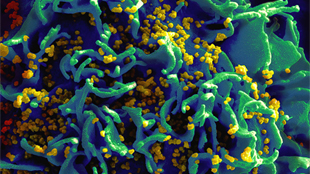 HIV-1 infecting a T-cellWIKIMEDIA, NIHHIV-1, the virus that causes AIDS, is renowned for its ability to escape the immune system. A new study shows that its sneaky talents depend on the capsid protein that makes up the virus’s outer coat.

Xavier Lahaye and Takeshi Satoh from the Institut Curie in Paris showed that HIV-1 uses its capsid to cloak its DNA from dendritic cells—sentries that detect incoming threats and mobilize the immune system. The researchers also managed to lift this immunity cloak by mutating the capsid.

“By playing with the capsid, we made an HIV-1 that does not replicate but can stimulate an immune response,” said Nicolas Manel, who led the study. “We could imagine modifying the virus and using it as a vaccine.” The results are published today in Immunity.

“It’s a very nice piece of work,” said Greg Towers from University College London, who was not involved in the study but recently published similar results. “I think we’re all on the same page, and there’s a paradigm shift in our understanding of how HIV interacts with the immune system. We used to think that the capsid came off the virus when it entered the cell, and its job was done. It turns out that it also protects the virus’s DNA from being seen.”

Dendritic cells can recognize viruses that infect them with a range of sensor molecules, and they instruct other parts of the immune system to target these threats.  “They are the key orchestrators of the immune response,” said Manel.  “They’re first to detect pathogens and direct what happens after that.”

Back in 2010, Manel’s team showed that dendritic cells can detect HIV-1 under some circumstances, although this is atypical because the virus does not usually infect the cells efficiently. By contrast, a related virus called HIV-2 does fully infect dendritic cells and triggers a strong immune response. This partly explains why HIV-1 can evade the immune system and cause AIDS, while HIV-2 often does not.

The team wanted to find out how the dendritic cells were detecting the viruses, and which parts they were sensing. They began by tweaking HIV-2’s capsid, and found that changing a single amino acid produced a virus that cannot infect dendritic cells but can still be detected by them. This implied that detection takes place at an early part of the virus’s life cycle, before it has a chance to make copies of itself.

Once HIV-1 and HIV-2 enter cells, they copy their RNA genome into a DNA molecule that is integrated into the genetic material of their host. The team found that this DNA is what the dendritic cells detect. “You need synthesis of DNA for detection, but you don’t need the steps after,” said Manel.

The team also identified the sensor molecule—a protein called cGAS, which was discovered by investigators at University of Texas Southwestern Medical Center in Dallas this year. When cGAS detects viral DNA in dendritic cells, it triggers a chain of molecular signals that marshals an immune response.

That explains HIV-2, but how does HIV-1 evade detection? The team showed that the capsid somehow masks the viral DNA, preventing cGAS from sensing it. This allows the DNA to integrate into the host’s genome, be copied, and produce new virus particles.

The team managed to peel back this invisibility cloak by mutating the capsid, leaving HIV-1’s DNA exposed and visible to the cGAS sensors. This suggested that similar modified viruses may, after much development, form the basis of a vaccine. This modification happens naturally to an extent—people who are infected with HIV-1 live longer if they had previously been infected with HIV-2, and are less likely to proceed to develop AIDS.

Alternatively, “we can think about small chemical compounds that stimulate this pathway and mimic the immune response,” said Manel.

“The study highlights the importance of studying HIV-2 [to increase] our understanding of underlying mechanisms important for HIV-1 pathogenesis,” added Joakim Esbjörnsson from Lund University in an e-mail.

Editor's Note (December 4): For the sake of clarity, we've added the word "often" to the sentence in the sixth paragraph describing immune detection of HIV-1 and HIV-2. 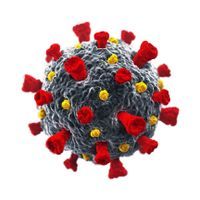