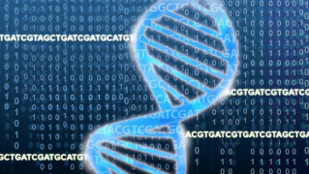 NHGRIMany animal genomes include bacterial and fungal genes acquired by horizontal gene transfer (HGT) during evolution, according to a study published today (March 12) in Genome Biology. Scanning the genomes of fruit flies, nematodes, primates, and humans, among other animals, researchers found evidence to suggest that some of these horizontally acquired genes may even be functional.

When the human genome was first published, the suggestion that it contained bacterial genes was controversial. Subsequent studies questioned the possibility of HGT, offering alternate explanations for the presence of genes that resembled bacterial sequences, such as gene loss, or convergent or divergent evolution.

“There were methodological issues with both sides of the argument, and the main problem was that we just didn’t have the data back then that we do now,” said Alastair Crisp of the University of Cambridge, an author on the new study.

But this latest study is the first to extend across a breadth of species and types of genes. “The study makes a compelling case presenting more evidence of lateral gene transfer from bacteria into eukaryotes,” said microbiologist Julie Hotopp of the University of Maryland who was not involved with the work. “Redoing this type of analysis has been needed for quite some time. People continue to cite the papers from 2000 and 2001 as examples that there is no lateral gene transfer, particularly in humans.”

To re-evaluate the extent of bacterial gene transfer into animals, Crisp and his colleagues analyzed 40 animal genomes, including 10 primates, 12 Drosophila species, and four Caenorhabditis genomes. The researchers computed a score to quantitate how closely a gene aligned to a non-metazoan sequence compared to a metazoan, or animal, sequence. Based on this score, they considered genes that strongly resembled non-animal sequences to be horizontally transferred. Depending on the scores, between 55 percent and 88 percent of the sequences analyzed strongly resembled prokaryotic sequences, suggesting they had been introduced into animal genomes by lateral transfer.

“We had an idea that HGT was much broader than people had previously suspected,” said Crisp. “What surprised us particularly was that there seemed to be a broadly similar amount in both vertebrates and invertebrates.”

The results supported analyses from previous studies that suggested human genes—such as FTO, the fat mass and obesity-associated gene—may have been horizontally acquired. Phylogenetic comparisons also found that some genes, such as hyaluronan synthases (HAS) in the human genome, which were originally thought to be horizontally transferred from bacteria but later rejected, may in fact be of fungal origin.

A large proportion of the “foreign” genes analyzed were found on the same genomic scaffolds as native animal genes. The strong linkage suggested to Crisp and his colleagues that contamination of sequenced samples was unlikely to be the source of these non-native genes.

However, the validity of these results hinge upon the quality of the assembled genomes that were analyzed. “Some genomes, such as C. elegans, D. melanogaster, and the human genome, are very well put-together. But in others, the assemblies may not be as good, and poor assemblies will result in something that looks like gene transfer,” said Hotopp. “It just means that in some organisms they may have overestimated it.”

Crisp’s team found that several of the foreign genes in metazoan genomes encoded enzymes and likely had active biochemical functions. In three nematode and all the primate genomes analyzed, the researchers found that 95 percent of foreign genes contained introns, suggesting that these genes have been “domesticated” over time.

“Since HGT events are not incredibly common, it seems likely that the mechanisms [operating] are very similar to the ones that would insert introns into any genes,” said Crisp. “Looking at recent HGT events can tell us how introns were inserted into other eukaryotic genes, or how transcriptional regulation of new genes evolves.”

The process of lateral gene transfer appears to be both ancient and active today. In human and other primate genomes, foreign genes appear to have entered the genome only in their last common ancestors. But in some Drosophila species and nematodes, the process appears to have occurred much more recently.

The results suggest that “if we use the same yardstick to measure a variety of model organisms, it’s possible to say that mammalian genomes have also been subjected to low levels of HGT, although it happened only on very rare occasions at the early stages of evolution,” said molecular geneticist Irina Arkhipova of the Marine Biological Laboratory in Woods Hole, Massachusetts who was not involved with the study. “Some species are more susceptible than others. But it definitely can happen and has happened during evolution, and has played a role in shaping functional diversity of the gene repertoire in metazoans.”

Microbiologist Jonathan Eisen of the University of California, Davis, who also did not participate in the work noted that the study’s results don’t conclusively exclude gene loss as an alternate explanation of their data.

“This is pretty typical of claims of HGT,” Eisen told The Scientist in an e-mail. “Many researchers show evidence that is consistent with the occurence of HGT (which they did here) but few actually explicitly test alternative hypotheses such as gene loss, bad alignments, convergence, divergence, contamination, random noise, and more.”

“I suspect that [these results] won’t be universally accepted,” said Crisp. “But I think it takes a good shot at settling the controversy.”

Clarification (March 12): This article has been updated from a previous version to note that hyaluronan synthases found in the human genome may be of fungal origin.