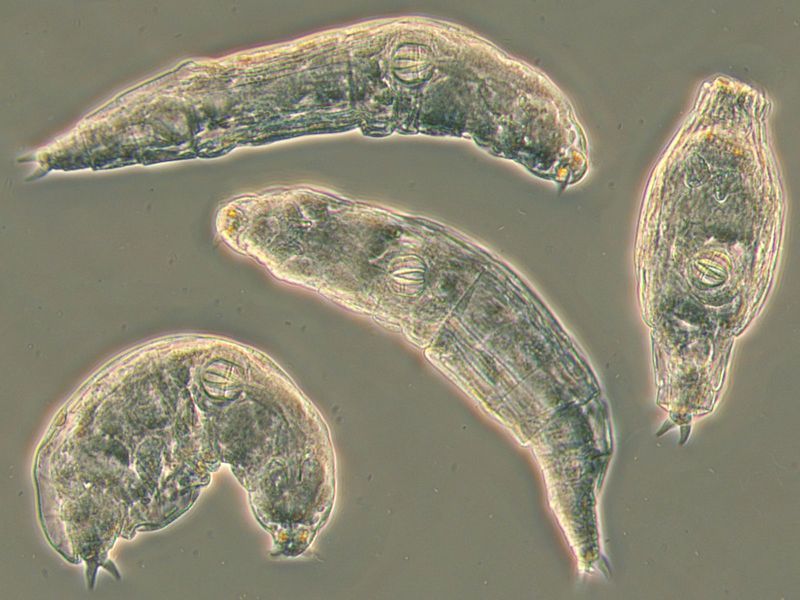 In 2016, a study suggested that bdelloid rotifers cultivate genetic diversity by sharing DNA among themselves via horizontal transfer. But in work published today (July 12) in Current Biology, a separate research team identifies likely contamination in the raw data from the first report, challenging its conclusions and illuminating the need for further investigation.

“We know that bdelloid rotifers are very weird animals, so the [2016] story seemed possible at first glance,” says Chris Wilson, an evolutionary biologist at Imperial College London and coauthor of the new paper. “We’ve known for a long time, for instance, that they’ve got lots of unexpected foreign DNA in their cells that’s been stolen from things like plants and bacteria, so to a lot of people it seemed natural that they might be swapping DNA with each other as well.”

Whatever their reproductive mode is, in the end it doesn’t make them less interesting.

Animals that reproduce asexually certainly exist, but in order to preserve diversity, they need some way of exchanging genetic information or they risk dying out. One possibility scientists have looked into is horizontal gene transfer—swapping DNA between individuals, rather than passing it down from parent to offspring.

While the 2016 results seemed plausible, a couple of things made Wilson and his colleagues question the findings. First, it appeared that the donors and recipients for the proposed horizontal transfers had all been collected from the same park in Belgium and sequenced for the 2016 paper. Wilson says that you might expect some of these animals to have picked up DNA from other animals that weren’t collected at the same time. This tidy alignment pointed to the idea that what the authors of the original study refer to as evidence for horizontal transfer might actually represent contamination between tubes in the lab rather than gene sharing happening in nature.

“It was also a bit surprising that the DNA from one animal and this other animal would be identical still even though they’re different species,” Wilson says. “We wondered why none of the DNA had changed since it was swapped, why it exactly matched this other animal that happened to be brought into the same lab at the same time.”

In order to investigate whether there might be a simpler explanation for the results, Wilson and colleagues contacted the authors of the 2016 study and requested the chromatograms—colored peaks that represent the raw data generated by Sanger sequencing. The authors quickly shared their chromatograms, which Wilson and colleagues analyzed. They noticed that the raw data were noisy, sometimes with multiple peaks representing more than one DNA nucleotide in the same position in the sequence, an early clue that there might be contamination. Wilson and his colleagues followed up with a statistical test in which they matched the secondary blips in the data against the predicted DNA sequence of the other animals that might be contaminating the sample and then calculated the probability of seeing a match just by chance. It turned out that the odds were less than 1 trillion to one that the noise in the raw data would be the same as a genetic sequence of another rotifer. Their conclusion: there must be DNA from two animals in the same tube.

The other team doesn’t agree entirely, although the additional analysis has provided helpful new information. “Something I realized thanks to this scholarly exchange with our colleagues from London is that most people assume that these little peaks at the bottom of the chromatograms are just random noise where actually [they’re] not,” says Jean-François Flot, an evolutionary biologist at the Université Libre de Bruxelles in Belgium and coauthor on the 2016 study. “It’s not random. Is it significant? That’s a different question. It’s not clear from the data they show that this really affects our analysis.”

Flot and colleagues have prepared a response to the re-analysis of their data that they plan to release as a preprint, in which they give explanations for some of the issues raised by Wilson’s team and discuss alternative interpretations. “In the long term this [exchange] is going to be a good thing for science,” Flot says.

“The big picture is . . . that whether or not bdelloids are exchanging DNA—or their degree of asexuality—is still a huge, wide-open question,” says David Mark Welch, an evolutionary biologist at the Marine Biological Laboratory in Woods Hole, Massachusetts, who was not involved in either study. He says that the research endeavor by these two groups shows that “even for people who are good and careful, working with these small animals is extremely difficult.”

In terms of what actually occurs during bdelloid reproduction, “neither the original paper nor this response demonstrate that bdelloids do not engage in horizontal transfer,” Mark Welch adds. “We all suspect that they do, but what [Wilson and colleagues] are pointing out is that the evidence that was presented in the original paper is more easily explained and almost certainly likely to be due to contamination.”

“The probability that there is some form of genetic exchange going on is quite likely,” agrees Tanja Schwander, an evolutionary biologist at the University of Lausanne in Switzerland who authored a perspective about the 2016 study for Current Biology. “The question really is: at which frequency [do] those genetic exchanges happen? Do they actually contribute to the generation of variation within . . . rotifers or is it something that really happens so rarely that it’s too rare actually to have continuous impact? Whatever their reproductive mode is, in the end it doesn’t make them less interesting.”