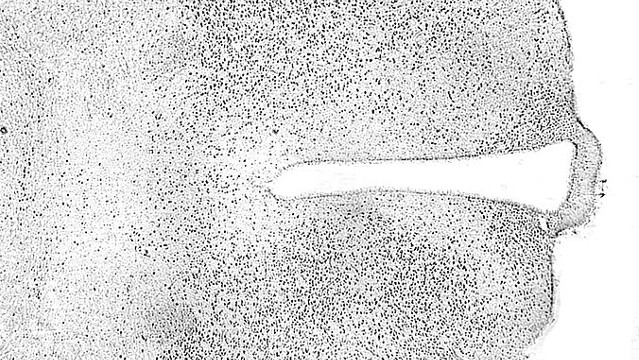 Slice of a mouse hypothalamusWIKIMEDIA, ZABBNResearchers have shown that a hormone secreted by bone, called lipocalin 2 (LCN2), suppresses appetite in mice. The results, published today (March 8) in Nature, suggest that LCN2 crosses the rodents’ blood-brain barrier and binds a receptor in the hypothalamus. The team also found a link between body weight and LCN2 levels in people with type 2 diabetes.

The authors “have identified a protein that’s secreted from bone that has a pretty significant impact on feeding behavior,” Lora Heisler of the University of Aberdeen in Scotland, who did not participate in the work, told The Scientist. “And the fact that they found that some supporting evidence in humans is really exciting.”

“We have found a new role for bone as an endocrine organ, and that is its ability to regulate appetite,” said study coauthor Stavroula Kousteni of Columbia University in...

Scientists had previously identified LCN2 as a protein expressed in fat cells, but Kousteni and colleagues showed that it is enriched 10-fold in osteoblasts. When they generated mice without LCN2 in their osteoblasts, levels of the circulating hormone dropped 67 percent. These mice ate more than control animals and showed increases in fat mass and body weight.

The team then injected the hormone intraperitoneally into LCN2-knockout mice, which restored normal serum levels of the peptide. LCN2 accumulated in the animals’ brains, especially their hypothalamuses, suggesting that the hormone can cross the blood-brain barrier. LCN2 injections directly into the brains of knockout mice suppressed appetite and decreased weight gain.

Kousteni and colleagues next investigated the interaction of LCN2 with the melanocortin 4 receptor (MC4R), which is expressed in the hypothalamus and is known to be involved in appetite regulation. Injection of LCN2 activated cells in the hypothalamus that express MC4R in wild-type mice, but not in MC4R-knockout mice, they found. And upon injection of LCN2, MC4R-knockout mice did not experience the same decreases in appetite or body weight, or increases in insulin sensitivity or glucose tolerance, as their wild-type counterparts. The team’s findings suggest that LCN2 binds to and activates MC4R.

In people with type 2 diabetes, the researchers reported, body weight was inversely linked to serum levels of LCN2. The team also found that some patients with MC4R mutations have higher levels of circulating LCN2. This was unsurprising, as ligands are often expressed at higher levels when their receptors are inactivated.

“This [study] is still very initial, but I think this is important and the effects they have are quite strong,” said Marcelo Dietrich of Yale University School of Medicine in Newhaven, Connecticut, who did not participate in the work. Dietrich highlighted several open questions, including the role skeletal movement may play in LCN2 regulation and why a bone-secreted protein appears to regulate appetite.

“The big question that still remains unexplored at this point [is]: Why would something that’s secreted by the bone suppress food intake?” echoed Michael Krashes of the National Institute of Diabetes and Digestive and Kidney Diseases in Bethesda, Maryland, who did not participate in the study. “The next step is to try and figure out why that is,” he added.

Future work could also take a more translational direction. The team plans to investigate whether LCN2 functions in humans and non-human primates as it does in mice. And Kousteni said she is optimistic about the potential of LCN2 as a treatment for obesity. “We are hopeful about the lack of any toxic effects because it’s a naturally occurring protein,” she said. “We see that if we give it in doses as high as 3,000-fold higher than the circulating [level], nothing happens to the mice. They’re still fine.”