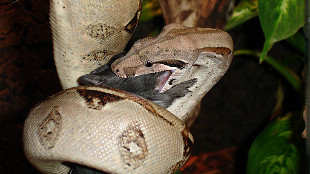 It has long been assumed that boa constrictors kill their prey by squeezing them until they suffocate. But a study published this week (July 22) in the Journal of Experimental Biology, suggests otherwise. Interrupting blood flow turns out to be a faster and more deadly result of the boa’s tight grip, according to the study.

Researchers at Dickinson College in Pennsylvania measured the blood pressure and heart activity of rats as boas tightened their grips around the anaesthetized animals. The team compared those measurements to others taken before and after the constriction event and analyzed the rats’ blood chemistry, finding that it took just six seconds for a constricted rat’s arterial blood pressure to drop to half of its baseline and one minute for its heart rate to drop by nearly 50 percent. “Each one of these failures could have caused death in the animals,” study...

“It isn’t the first test of circulatory arrest from constriction,” Brad Moon, who studies reptile behavior at the University of Lafayette, told BBC News. “But it is the first direct test that measured blood pressures and [heart activity]. It shows that constriction is stronger, faster and more effective than expected.”

The Verge noted that Bobeck plans to repeat these studies with smaller animals, including amphibians, to determine whether boa constrictors use the same killing method on different types of prey.