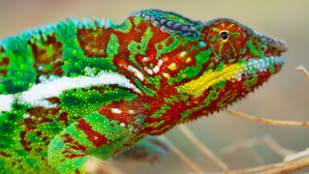 NATURE COMMUNICATIONS, J. TEYSSIER ET AL. Chameleon colors aren’t just for camouflage. When panther chameleons (Furcifer pardalis) in Madagascar fight over territory, a dazzling display precedes their contests: resting males, typically green and inconspicuous, turn yellow or orange; red patches on their bodies can brighten, and blues can fade to whitish tints. The color changes, which are completely reversible and occur within minutes, are not the result of shifts in pigments alone. Results published today (March 10) in Nature Communications suggest they are the result of quick changes to light-reflecting guanine nanocrystals, which create structural color within chameleon skin.

Two layers of cells known as iridophores contain these nanocrystals. A superficial layer, known as S-iridophores, actively alters the spacing of these crystals to cause the rapid color changes, while a deeper layer, made up of D-iridophores, reflects a broader spectrum of light near the infrared wavelengths. In...

“People generally assume that color change in chameleons is well understood, and I don’t think it is at all,” said Randall Morrison of McDaniel College in Maryland who was not involved with the study. “This whole notion of the tunable photonic crystals is a new way to look at physiological color change in animals.”

Michel Milinkovitch of the University of Geneva in Switzerland and his colleagues captured the chameleons’ vivid displays using high-speed videography, confirming that the changing colors were a result of shifts in reflected wavelengths—from blue to green and then orange or red—rather than an increase or decrease in the proportions of pigments.

Analyzing the skin of adult chameleons using electron microscopy, the researchers found that in the S-iridophores of resting animals, which were blue or green, guanine nanocrystals were approximately 30 percent closer to one another than they were in excited males, whose skin was white or yellow.

To test whether cramming guanine crystals closer together in this way caused the color changes, the researchers placed chameleon skin cells in a high-salt solution. The increased osmolarity caused cells to shrink and crystals to cluster, shifting reflected wavelengths from yellow to green and then blue, much like the animals’ colors. The distance between nanocrystals likely causes the iridophores to shift the wavelengths they reflect, according to the researchers.

“The surprising result here is that these animals can actually actively tune the geometry of these crystals in their iridophores, and they can do that reversibly,” Milinkovitch told The Scientist. “They can choose to go from green to yellow and back to green within minutes.”

Unlike S-iridophores, which are fully developed only in adult males, D-iridophores are common across the species and in other distantly related chameleons. Guanine crystals within the more deeply embedded D-iridophores are larger, more disorganized, and did not appear to rearrange to contribute to color changes. Instead, they reflected approximately 45 percent of radiation in the infrared wavelengths, suggesting the layer acts as a broad-band reflector to protect these animals from extreme heat.

“This mechanism might explain why these chameleons are able to stay out in a lot of sunlight whereas that would be a problem for a lot of other lizards,” said Morrison. “They would simply overheat.”

Typically, light-reflecting cells are only thought to play color-related roles. “It’s neat that this new type of structure could affect longer wavelengths and thermoregulation,” noted Matthew Shawkey of the University of Akron in Ohio who was not involved with the study. “It’d be nice to see some behavioral evidence to support these mechanical data. [This work] lays the groundwork for these future studies.”

Like chameleons, cephalopods can quickly change colors. “They also do it with cells called iridophores, but we don’t know yet if iridophores [of cephalopods and chameleons] are truly homologous,” explained Milinkovitch, but “the mechanisms are quite different.”

Although the results indicate that panther chameleons tune their color displays via crystals, precisely how they change the spacing in these crystal lattices is still unknown. The mechanisms may be hormonal, controlled by neurons, or some combination of both, according to the researchers. In future work, Milinkovitch and his colleagues aim to test whether cytoskeletal elements play a part in moving crystals around within S-iridophores.