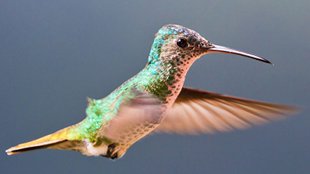 WIKIMEDIA, MARCIAL4Birds lack the classical vertebrate sweet taste receptor, but evolution has fashioned a new one for hummingbirds from an ancestral savory, or umami, receptor, according to a report published in Science today (August 21). This repurposed receptor has enabled hummingbirds to glug plant nectar while their closest relatives eat insects.

“It’s long been a puzzle as to how hummingbirds detect sweetness and these investigators, using a whole bunch of different techniques, have pretty much . . . nailed the answer,” said Gary Beauchamp, director of the Monell Chemical Senses Center in Philadelphia, who was not involved in the work.

On the tongues of most vertebrates, the receptor that binds sugars and conveys the sense of sweet taste consists of two subunits called T1R2 and T1R3. When T1R3 is paired with the subunit T1R1, on the other hand, savory flavors from meat, cheese, and fish are sensed. The...

Birds have varied diets—seeds, insects, fish, fruits, and nectars are all on the avian menu—but they lack the gene for T1R2. “This raised a very interesting mystery as to how these animals can detect sugar,” said Stephen Liberles, a professor of cell biology at Harvard Medical School, who led the new study.

To solve the mystery, Liberles turned to perhaps the most sweet-toothed bird of all—the hummingbird. His team cloned taste receptors from hummingbirds—which consume more than their own body weight in nectar each day—as well as from their closest relative, the insect-eating chimney swift, and the sugar-insensitive chicken. The researchers also examined taste receptors in the available genomes of 10 other bird species. Although none of the birds possessed T1R2, they all possessed T1R1 and T1R3. And in the hummingbird, these genes revealed mutations that appeared to be under positive selection—that is, the proportion of protein-altering mutations were greater than expected by chance.

The team expressed the hummingbird, chimney swift, and chicken T1R1-T1R3 receptors in cultured cells and discovered that while the swift and chicken receptors responded robustly to amino acids—as would be expected for the savory taste receptor—the hummingbird receptor did not. Instead it produced a strong response to sugars.

The team then made chimeric T1R1-T1R3 receptors—using parts from the hummingbird genes and parts from the chicken genes—and found widespread mutations over both T1R1 and T1R3 that conveyed the switch from savory to sugar detection. “[The paper] does a very nice job of putting a molecular explanation on to a very specific type of ecological and behavioral response in hummingbirds—their very specific diet,” said Steven Munger, associate director of the Center for Smell and Taste at the University of Florida, Gainesville, who was not involved in the work.

“It’s a really nice example of how a change in one receptor can drive a complex behavioral phenotype and ultimately drive the evolution of a new species,” added Liberles, who explained that the acquisition of nectar-eating behavior in hummingbirds had allowed them to expand into a novel ecological niche. These birds have undergone “massive radiation,” he added—there are more than 300 species of hummingbird throughout North and South America.

One outstanding question is whether evolution has come up with the same solution for other sweet-toothed birds. “I’m sure people, the day after this is published, will madly start trying to answer [that],” said Beauchamp.