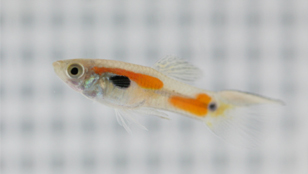 Orange spots on prawn pincers may take advantage of the fact that guppies happen to like the color, according to new research published today (May 15) in Proceedings of the Royal Society B. In some Trinidad streams, predatory prawns coexist with guppy species with brilliant orange males and that eat orange-colored fruit. By copying the color, the prawns appear to be able to get closer to their prey, as guppies dropped their guard when they saw the orange-spotted pincers. Thus, what might lure a female guppy to a male might also lure her into danger.

“This is the first significant advance on predatory lures for 100+ years and the first experiment really addressing why a lure should actually work,” John Endler, an evolutionary ecologist at Deakin University in Australia, wrote in a email. Endler, who was not involved with the research, co-authored...

That predators might have co-opted a prey species’ color preference in order to entice that prey is a “new, interesting twist” on color bias, which states that animals evolve preferences and even high visual acuity for colors relevant to their survival and reproduction, added Greg Grether, a behavioral ecologist at the University of California, Los Angeles, who was not involved in the work. Grether’s work, for example, has shown that female guppies’ love of orange pushed male guppies to maintain the right orange shade.

During a trip to Trinidad to study other details of guppy color vision, Cameron Weadick of Helen Rodd’s University of Toronto lab and his collaborators noticed that prawns, which are believed to be insensitive to orange, often had orange spots on their pincers. Even more curious, the prawns often adopted a stationary, pincer-open stance that hinted they might be lying in wait, said Weadick. It spurred the notion that the spots might be lures for the orange-sensitive guppies. To test this hypothesis, the researchers made model prawns, painted brown, with either uniform claws or claws with orange or green spots. They then placed female guppies in aquaria with the model prawns and charted how long the guppies stayed in the “safe” zone, near the prawn’s tail, or ventured into the “danger” zone, near its head.

They found that guppies from prawn-filled streams stayed near the tail in solid brown and green-spotted models, but spent more time near the head—and thus the pincers—in models with orange spots, suggesting their preference for the color was luging them to the spots.

A second set of experiments with live crayfish showed little effect of orange spots, however, possibly because additional cues of a live predator, such as movement and smell, overrode the guppies’ penchant for orange. Or it could simply be that the crayfish were not as convincing predators as their prawn models, said Weadick, or because the researchers had painted them with orange nail polish, unwilling to paint live animals with the same heavy acrylic paint they’d used on the models, and more research is needed to differentiate between these possibilities

Future work will also help determine which guppies are the most easily lured, said Endler, who suspects there may be differences in male and female guppy responses to orange pincers. If males respond equally to females, it would suggest that the prawns are taking advantage of a food bias, rather than a sexual bias, he said.

Additionally, said Grether, how this lure affects the evolution of guppy populations in the wild is not clear. “You might expect a weaker preference for orange if prawns use it as a lure,” Grether explained, but males might also “ramp up” their orangeness if female attraction is weakened.