Unable to travel to international or remote sites, some researchers are losing critical data.

ABOVE: A crew sets sail to Station ALOHA off the coast of Hawaii in August.
COURTESY OF ANGELICQUE WHITE

Tears streaked the top of Angelicque White’s cheekbones and soaked her mask in the moments after she had a cotton-tipped stick inserted into her nose to test for the novel coronavirus. “When they shove that swab that far up your nostril, you immediately start crying,” she tells The Scientist. The test, along with a mandatory two-week quarantine leading up to it, was part of a strict protocol White and others followed to be allowed to once again set sail on their research ship and continue to collect data on a massive ocean current in the Pacific.

Called the North Pacific Subtropical Gyre, the swirl of seawater, which covers roughly 20 million square kilometers, is the largest ecosystem on Earth and the oldest ecosystem in the ocean, a prime habitat for billions of plants, animals, and microbes. Scientists have studied the gyre for more than 30 years hoping to tease apart the complex physical, chemical, and biological interactions that allow it to support the vast array of creatures that live there. But the ecosystem is also important for another reason: it’s starting to show evidence of human-caused climate change. The ocean current is “a canary in a coal mine in a lot of ways,” says White, a microbial oceanographer at the University of Hawai‘i at Mānoa. “We’re starting to see changes in the ecosystem, which means we’ve affected one of the most remote and isolated ecosystems on the planet.” 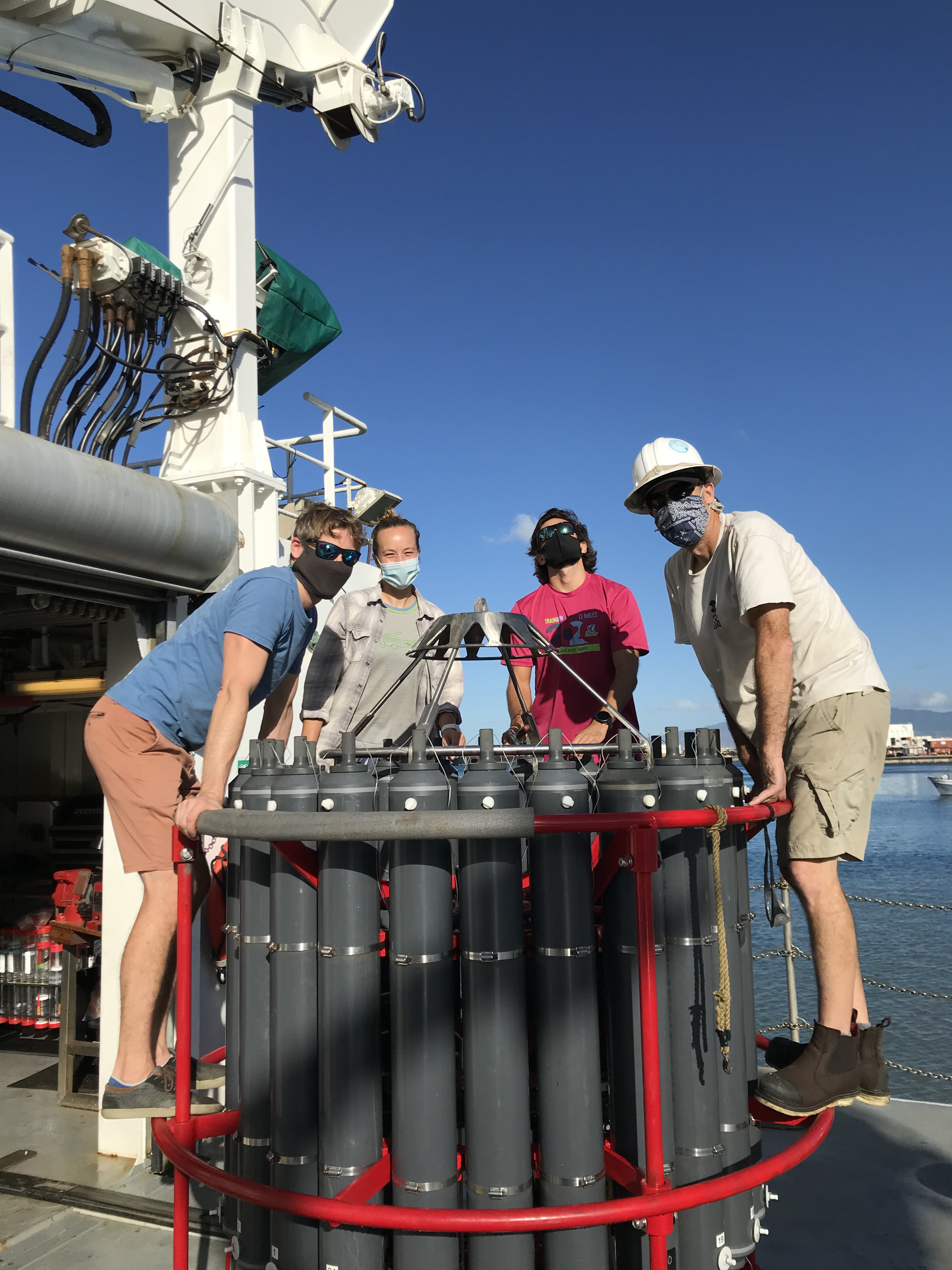 To study the gyre, researchers have sailed nearly every month since 1988 to Station ALOHA, a spot within the ocean current that is used as an open-water research base. Maintenance work on the ship that takes scientists there put a stop to several of the monthly cruises starting in early 2020. Then, coronavirus hit, and the team wasn’t sure when they’d be able to go back out to sea. Finally, in late spring, the researchers got word from the National Science Foundation and the University-National Oceanographic Laboratory System, which coordinates oceanographic ships’ schedules, that they could start planning summer cruises, provided that crew members undergo stringent pre-cruise quarantine and testing. By midsummer, the crew was Station ALOHA bound, following strict social distancing, hand washing, and mask wearing requirements. “It felt sooo good to science again,” White tweeted on July 21.

But White’s experience is the exception, not the rule. Many researchers are stuck at home, analyzing data they’ve already collected or planning data collection for when they can travel out into the field again. “I know there’s so many of my colleagues that are desperate to go to their field sites,” White says.

One researcher unable to travel to her field site is Barbara Piperata, an anthropologist at Ohio State University (OSU). Earlier this year, she was set to begin a three-year project tracking how cultural practices and exposure to infectious pathogens in drinking water shapes the gut microbiome of children in Belém, Brazil, in their first two years of life. Her team, which includes collaborators and students based in Brazil, planned to gather data on infants in poor and wealthy neighborhoods and look at how daily routines in those environments affected the bacterial composition of the children’s guts.

“It is an enormously hands-on international project,” Piperata says, and “it’s been enormously affected by COVID.”

The project was slated to launch in January, so in the early weeks of 2020, her team began arranging logistics, including finding Brazilian students to serve on the field team, finalizing and validating the tools for the study, and strengthening contacts with local health clinics and hospitals where recruitment would take place. Then COVID-19 began spreading beyond Asia, and by February “it became apparent that things might change,” she explains. By March, “everything really went haywire.”

Because of the pandemic, OSU would not allow Piperata to take a planned spring break trip to Brazil in March to conduct the initial stage of training for data collection. “Probably a good idea,” Piperata says. The university did not specify when research trips could resume, so her team tried to prepare for a best-case scenario—travel in the summer—and a worst-case scenario of no travel until later in the year or even next year. By May, Piperata knew she wouldn’t be headed to Brazil any time soon, so she and her colleagues and two students involved in the project began filming instructions for her Brazilian collaborators in English and Portuguese on the various protocols, including how to interview and survey the mothers and how to collect fecal samples from babies, mothers, and children in participating households, along with breast milk samples from mothers and saliva samples from babies. The team also plans to measure mothers’ and babies’ height and weight, and the babies’ head circumference, and to collect drinking water samples and surface swabs of the participants’ houses to assess which pathogens the children are exposed to.

The pandemic has “slowed down the work by about nine months,” Piperata says. And while her in-country collaborators will be able to collect the data, they have been delayed as the city of Belem has been on lockdown. As the city is now loosening restrictions, the team expects to begin participant recruitment in the upcoming months.

However, until case numbers decline considerably in the area, the team will need to recruit at a slower pace and take precautions to avoid exposing themselves and study participants to SARS-CoV-2. “We certainly don’t want to do that,” Piperata says. Delaying data collection until next year isn’t an option, as the study will track the babies from birth to age two and the project must be completed within the National Science Foundation’s three-year funding window. The team has decided that if the case numbers remain high, the researchers will alter the study design to reduce the data collection timeline.

Piperata also notes that there are some types of data she can’t rely on others to collect for her—data that will be lost if she can’t travel to Brazil. Ethnography, the study of customs of individual peoples and cultures, is central to this research, and “we learn by seeing,” she says. Ordinarily, while others would collect samples and measurements, Piperata would be watching the mother and child and asking specific questions about their behaviors and interactions, often off the cuff, to learn more about each families’ culture, values, and child-rearing practices. “Nobody can collect those kinds of data for you right now,” she says. Even to teach other team members to gather this kind of information, she says, she’d need to be there, showing her fellow researchers what she sees and how it informs her line of questioning. “I have 20 years of experience doing field research,” she says, “and I imagined this project, so I have bigger ideas in my head about things I want to understand.”

Catch-22: Research on infectious disease outbreaks stalls during the pandemic

San Francisco State University’s Ravinder Sehgal, who studies infectious diseases in birds, also has to contend with the prospect that his team has lost data forever. His field project focused on how deforestation in the Central African country of Cameroon affects the species diversity of mosquitos, which can carry malaria and dengue. He monitors how changes in mosquito populations can spread such diseases to birds and also to local human populations. “What we’re finding is . . . that when you cut down the rainforests, you get these human-biting mosquitoes that can appear very quickly,” he tells The Scientist. As the mosquitos move in after deforestation, he says, they can cause increased prevalence of mosquito-borne human diseases, and also appear to infect birds with diseases the animals haven’t encountered before.

To track such changes, Sehgal and his colleagues analyze blood samples from birds and collect data on mosquito abundance and diversity at a rainforest site before it’s cleared. They then take similar measurements after the forest is razed, and again when a palm oil plantation has been planted at the site. The results, Sehgal says, have revealed how deforestation affects disease transmission and offered a clue about which diseases emerge from a deforested site—information that could be relevant to understanding how SARS-CoV-2, the virus that causes COVID-19, jumped from animals to people.

Sehgal says his field research was already on hold before the pandemic started because of a conflict in the region, but he and his collaborators had hoped that peace talks would lead to an end to the fighting so they could return this summer. There’ve been recent efforts to resolve the conflict, but because of COVID-19, San Francisco State University has banned faculty and staff from making work-related international trips until next year. “We [can’t] do any work this summer at all,” he says. “We had all the data from before the deforestation now. We only had a limited amount of data from after the deforestation. We wanted to go back and get much more data from the ‘after’ scenario.”

Funding for the work, which came from the United States Agency for International Development, has ended, and because of the ongoing conflict in southwest Cameroon and because he and his colleagues weren’t able to collect all the data they’d planned to, it is not likely to be funded again, Sehgal says. “It’s understandable obviously. We don’t want to be spreading the coronavirus around, but it’s also kind of a catch-22 because now we’re not doing research on the very problem that caused us to get here.”

Correction (August 20, 2020): This article originally stated that the Station ALOHA crew got word from the National Oceanic and Atmospheric Administration that they could set out. The National Science Foundation, not NOAA, coordinates oceanographic ships’ schedules. The Scientist regrets the error.