An examination of ancient and modern skeletal samples gathered from around the world reveals that the shape and size of the female birth canal varies widely among different human populations. These differences are not so much the result of a functional need but rather the products of chance genetic differences and the timing of migrations around the globe, according to the study published today (October 24) in Proceedings of the Royal Society B.

“This is an excellent and thorough analysis of several of the main evolutionary processes that we think have shaped the evolution of the human female pelvis,” Helen Kurki, an anthropologist at the University of Victoria who was not involved in the work, writes in an email to The Scientist. “This illustration of high variation is important because it challenges common perceptions that the pelvic canal of females has one...

Based on mostly homogeneous and small European and US sampling studies, the dominant hypothesis regarding the shape of the birth canal has been that the pelvis is under conflicting selective pressures. On the one hand, it’s advantageous to be wider to accommodate the relatively large fetal head, while on the other hand, a compact pelvic bone structure supports optimal walking on two legs. The current work and several other studies in the last few years challenge to this so-called ‘obstetrical dilemma hypothesis,’ according to Kurki.

In the latest study, evolutionary anthropologist Lia Betti of the University of Roehampton in the UK and evolutionary ecologist Andrea Manica of the University of Cambridge compiled data from the skeletons of 348 female individuals from 24 populations across five continents—Africa, North America, South America, Asia, and Europe. The samples spanned from 2000 BCE to the present. They used bone dimensions to estimate the body mass of the individuals and pelvic bone measurements to compare pelvic size and shape variations and the role of neutral evolution (also called genetic drift), climate, and fetal size (particularly the head) in the evolution of the female pelvis.

The researchers’ analysis revealed that the variation in the shape and size of the birth canal varies widely by geography. “The most important point is that women are really variable, and that variation depends on geography. The extent of the variability was really surprising to me, there is no one typical pelvis,” says Betti. 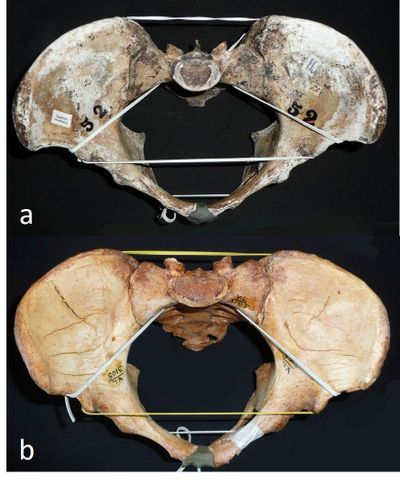 While prior studies have shown a link between certain body proportions and climate—in particular, a stockier build and wider pelvis was tied to colder climates, while a narrower pelvis and skeleton was more common in populations living closer to the equator—the current work only found a minor effect of climate on the female pelvis.

There was also no correlation between pelvic canal shape and the body mass of the female bone samples, the authors found, nor was there support for natural selection to reduce the risk of a fetus being too large to fit through a woman’s birth canal during childbirth.

Rather, the largest effect on the differences among the birth canals of populations around the world, and throughout time, was random genetic change. “Our results show that these geographic differences that we see in the pelvis are nonfunctional, chance ones likely accumulated during the expansion of people into different geographic areas,” explains Betti.

“The largest contribution [of the new work] is that it appears that human migrations and that neutral evolution rather than natural selection had the strongest effect on the size and shape of the birth canal,” says Cara Wall-Scheffler, a professor at Seattle Pacific University in Washington who studies anatomy and physiology in the context of human evolution and who was not involved in the current study.

For Kurki, the work has a major implication for how researchers think about human evolution. “This study adds to the growing support for human variation as the result of non-selective processes,” she writes. “Not everything about our morphology is an adaptation to something in our environment. Often it is just these neutral processes at play.”