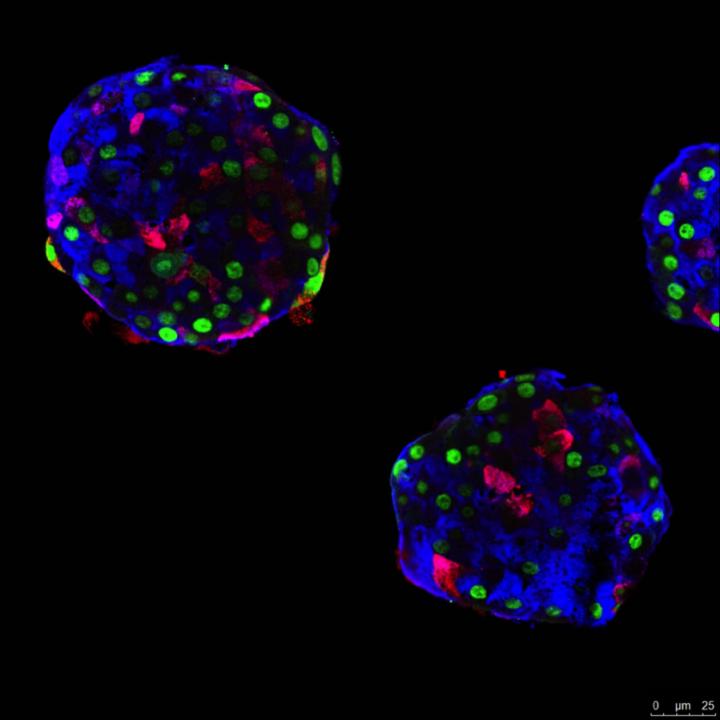 An international team of researchers has successfully reprogrammed human α cells into insulin-producing β cells, according to a study published yesterday (February 13) in Nature.

In the pancreas, these two cell types form clumps called islets that help regulate blood sugar, with insulin from β cells bringing levels down and glucagon from α cells boosting them up. Sure enough, when the researchers put clumps of the reprogrammed α cells into diabetic mice, the animals’ blood-sugar levels came down.

“I think this has got huge potential,” Terence Herbert, a biologist at the University of Lincoln in the UK, tells Nature.

In 2010, Pedro Herrera of the University of Geneva, Switzerland, and colleagues showed that that if β cells were ablated in the pancreases of mice, α cells could take on a...

For the new study, Herrera and colleagues engineered human α cells to produce Pdx1 and MafA, which prompted some 30 percent of the cells to begin producing insulin in response to glucose. When the researchers implanted these “pseudo-islets” into mice whose β cells had been destroyed, the animals’ blood-sugar levels dropped into the normal range. “The mice recovered!” Herrera says in a press release.

The effects were long lasting, with the modified α cells continuing to produce inulin in the mice six months after transplantation. When the researchers removed the pseudo-islets, the mice once again became diabetic, losing control of their blood-sugar levels.

Although a treatment based on this work is a long way off, Herrera tells Nature, he could envision a future diabetes drug that triggers α cells to become more β-like and start producing insulin. Importantly, the modified cell did not fully transition to a β-cell phenotype, but maintained some qualities of α cells, which may help them avoid immune detection in patients with type 1 diabetes, where an autoimmune reaction destroys the pancreas’s β cells. Indeed, when the researchers cultured the cells with T cells from type 1 diabetes patients, the reprogrammed cells triggered a weaker immune response than β cells.