Genetic changes that result in near or total loss of a protein called autophagy related 7 (ATG7) are associated with complex neurodevelopmental disorders in humans, according to a study published June 24 in The New England Journal of Medicine. The protein, which controls a crucial step in an intracellular recycling process called autophagy, was thought to be essential for survival, because ATG7 knockout mice die shortly after birth.

Autophagy is an intracellular process of degradation that prevents buildup of damaged proteins and organelles and liberates essential nutrients during times of deficiency. During the multistep process, a double-layered membrane begins to form around the molecular cargo destined for degradation, forming a body called the autophagosome. As it forms, the membrane is decorated with proteins that help collect cargo. Once fully formed, the autophagosome fuses with a lysosome, and its contents are chemically and enzymatically degraded. Previous studies have found that ATG7 is important for several steps in autophagosome formation and maturation.

The study’s lead author, Rob Taylor, says his lab at the Wellcome Center for Mitochondrial Research in the United Kingdom studies how mitochondrial dysfunction causes human disease. A few years ago, the center, which diagnoses and treats patients with rare mitochondrial disorders, was contacted by a family with two children who had a similar suite of symptoms, including learning difficulties, ataxia (an inability to control body movements), facial dysmorphism, and brain abnormalities. When the researchers performed whole-exome sequencing on the sisters’ DNA, instead of finding problems with the mitochondria, they discovered they carried recessive, loss-of-function mutations in both ATG7 alleles.

“It just made us sit up and go, ‘Well, we don’t work in autophagy, but this is really interesting,’” Taylor recalls. “And that was the start of it.”

After identifying the ATG7 variants, the team collected cells and looked for ATG7 protein by Western blot. And, “lo and behold,” says Taylor, “we couldn’t detect any of the ATG7 protein.” This was really interesting, he says, because it completely went against the dogma that this protein was essential.

“To be honest, based on the genetic variants, we anticipated that there would be no ATG7 protein,” says first author Jack Collier. “But to actually see the experimental data with your own eyes after reading about these autophagy-deficient mice that die within 24 hours,” he says, “it was still a bit of a shock.”

Over the next few years, the researchers used the tool GeneMatcher to connect with four other families from around the world who also had severe recessive mutations in ATG7 and similar symptoms as the first set of patients. Some also had seizures or used wheelchairs.

To find out the functional consequences of the ATG7 loss, the team added the patients’ genes into ATG7-knockout mouse fibroblasts and saw a reduction in autophagy when compared to fibroblasts with the wildtype allele. And when the researchers cultured skin cells from the patients they saw that some patients had dramatic reductions in autophagic flux, the rate at which autophagy occurs, compared with healthy controls.

City University of New York, Queens biologist Alicia Meléndez, who was not involved with the study, says the patient samples are what she found most interesting and unusual about the study. “[The researchers] isolate cells from biopsy, and then they do actually test for autophagy flux.”

But surprisingly, not all the patients had a total loss of autophagy. 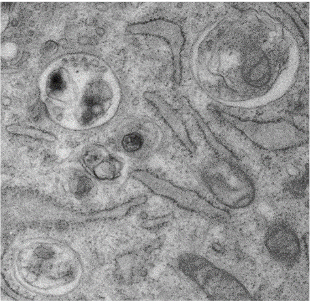 Electron micrograph showing autophagosomes in the top right and bottom left, and an autolysosome in the top left
ROb taylor and jack collier

When the gene is nonfunctional in patients, it doesn’t “completely abolish autophagy, because [the researchers] find the autophagosomes,” says Patricia Boya, a cell biologist at the Margarita Salas Center for Biological Research. Boya has collaborated with one of the study’s coauthors before but was not involved in the current work.

The observation that the patients still had low levels of autophagy also surprised Zhenyu Yue, a neuroscientist at Icahn School of Medicine at Mount Sinai. He says the finding suggests the human body “has the ability to compensate for some of the autophagy function, unlike mouse models.” Boya suggests that because autophagy is so important, there may be ATG7-independent autophagy pathways.

The team found that when they put the wildtype allele of ATG7 back into a patient’s fibroblasts, it rescued ATG7 expression and markers of autophagosome formation to normal levels, suggesting to Yue that gene therapy restoring a functional copy of ATG7 could be beneficial for patients in the future.

Another surprising finding was that the degree of ATG7 deletion didn’t track with the severity of patients’ symptoms. In fact, Collier says the opposite was true. “The patients with a complete absence of ATG7 demonstrate the mildest clinical phenotype, even though they’ve got the most severe biochemical defect in autophagy,” he says, “whereas the patients with the mildest impairment of autophagy demonstrate the most severe clinical phenotypes.” He says the team is interested in following up on this to try to find out why.

A major question the study raises is how ATG7 loss leads to the patients’ neurodevelopmental symptoms. “We know autophagy is very important for the nervous system,” says Yue, adding that impairment of autophagy has been implicated in multiple major neurodegenerative diseases including Alzheimer’s, Parkinson’s, ALS, and Huntington’s disease. But a core autophagy gene such as ATG7 has never been directly linked to a neurodevelopmental disease in humans, he says.

Meléndez notes that it’s possible that ATG7 might have a role outside of autophagy that’s related to the patients’ symptoms. While other autophagy-related genes have been associated with neurological disease, many of these proteins also have other functions.

One next step will be to look at autophagy in the human neurons, says Yue, perhaps by creating induced pluripotent stem cells from the skin cells and differentiating them into neurons. Taylor says his group is already planning this follow-up work.

“There’s a lot more work that we want to do going forward,” says Taylor, “taking this into other model systems and generating neural cell lines and trying to look in more physiologically relevant tissues derived from the patient.”