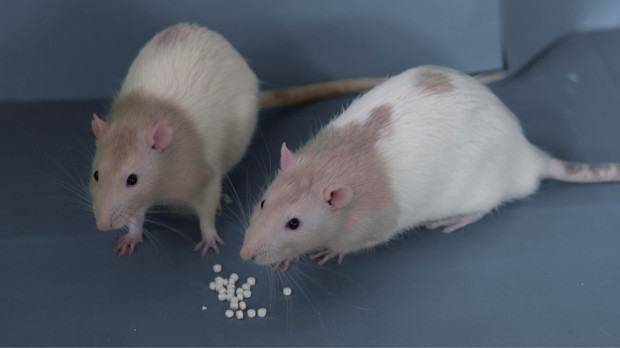 PHILIPPE ZIZZARITransgenic mice with an overactive form of the receptor for ghrelin—often dubbed the “hunger hormone”—do not have the increased appetites one might expect, yet still gain weight, according to a paper published yesterday (April 19) in Science Signaling. The results suggest that the long-held view of ghrelin as a regulator of food intake may not be entirely accurate. But not everyone is convinced.

“It’s an intellectually intriguing finding,” said Yale School of Medicine’s Tamas Horvath who was not involved in the study. “Am I 100 percent convinced that this proves that ghrelin has no effect on feeding? No. But I think that [the authors] come up with a provocative set of data and I think . . . it’s going to initiate more thorough studies on this important question,” he added.

Ghrelin and its only known receptor, the growth hormone secretagogue receptor (GHSR), have been implicated in,...

But attempts to investigate how the hormone and receptor exert these effects have only confused matters, said Jacques Pantel of INSERM’s Center for Psychiatry and Neuroscience in Paris who led the new study. Genetic deletions of ghrelin, or GHSR, for example, did not produce the expected results. “The animals were not anorexic,” Pantel said, which was “a big disappointment.”

Because eating is so essential for survival, it’s possible that the complete removal of ghrelin or GHSR from these animals may have promoted compensatory genes and pathways to kick in, said Pantel. So to avoid possible confounding effects of compensation, Pantel and his colleagues used transgenic rats that lacked only a tiny fraction of GHSR—the distal tip—rather than the whole protein. They showed that in cultured cells and transgenic animals, this mutant receptor had increased activity in response to ghrelin compared with the wild-type receptor.

The response to endogenous ghrelin, on the other hand, puzzled the team. While GHSR transgenic animals fed a standard diet gained more weight than control animals (which would be expected with a more active ghrelin-GHSR pathway), this was not the result of increased food intake. “Quite surprisingly, for a so-called orexigenic hormone, these animals were not eating more proportionally compared to their wild-type counterparts,” Pantel said.

Instead, Pantel thinks the weight gain, which was specifically due to increased body fat, might be because “the hormone is playing more of a role in fat storage,” he said. With this in mind, he suggested that the observed peak in ghrelin prior to meals might not be driving the search for food, but instead “preparing an organism to metabolize and store the [incoming] energy.”

Why, then, would injected but not endogenous ghrelin boost appetite? It’s far from clear, said Pantel, but one possibility is that injection provides such a sudden large dose of the hormone that it activates GHSR receptors in certain parts of the brain that normal endogenous fluctuations would not. Such atypical stimulation might then somehow trigger appetite.

Neuroscientist Sebastien Bouret of the University of Southern California who was not involved in the study said he doubts that endogenous ghrelin does not affect food intake, however. He said he thinks it is still possible a compensatory mechanism, albeit one that reduces the expected overeating, could be at work in the transgenic animals. “The ideal experiment would be to have this gain of function exclusively during adult life. . . so that we won’t have the compensatory mechanism,” he said. “Then we would be able to make a very strong conclusion.”