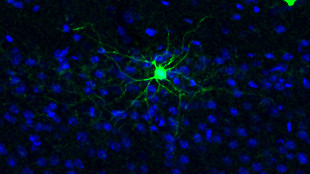 Interneuron within the cortexNATHALIE DEHORTERThe electrical activity of a neuron is considered a fundamental feature of its identity. But new research reveals this attribute is not necessarily fixed, at least in murine cortical inhibitory interneurons. In a paper published in Science today (September 10), researchers show that increasing or decreasing interneuron activity leads to molecular changes that ultimately hasten or delay the cells’ electrical discharges.

“In the past, the identities and properties of neurons were thought to be primarily determined by genetic programs during development and once these cell identities had been established it was thought to be pretty much static,” said neuroscientist Attila Losonczy of Columbia University who was not involved in the work. “This study provides compelling new evidence that even some basic functional properties of neurons, specifically the excitability and firing activity of cortical inhibitory neurons, are profoundly regulated by experience-driven and activity-dependent mechanisms in the adult brain.”...

Unlike sensory and motor neurons, which connect the central nervous system to the body’s organs and tissues, interneurons form connections between neurons. The majority of interneurons are inhibitory, meaning they dampen the excitability of other neurons, but within this subdivision, there is a vast array of subtypes.

“It’s a very, very large and diverse population,” said developmental neurobiologist Oscar Marin of King’s College London who led the study. Marin is interested in how this diversity is established, so, as a starting point, he and his colleagues focused on one type of interneuron called fast-spiking (FS) parvalbumin-expressing (PV) basket cells, which are known for their prominent role in learning. Even within this family of FS PV cells, explained Marin, there are subtypes marked by their differences in firing patterns. Some fire immediately upon depolarization while others exhibit a pronounced delay.

Marin’s team discovered that, in slices of mouse cortex, the FS PV cells with a firing delay tended to express high levels of a transcription factor called Er81, while those that fired early had low levels of Er81. In genetically engineered mice that lacked Er81 expression, the firing delay was lost.

The FS PV neurons from the engineered mice also had reduced levels of a potassium channel called Kv1.1, which is thought to mediate firing delays. The team also showed that Er81 interacted with the Kv1.1 gene’s promoter region, suggesting that it directly regulates the channel’s expression.

“It is very interesting that they’ve managed to find the causal link all the way from activity through a transcription factor, through the expression of a particular potassium channel, through to this electrophysiological phenotype,” said neurologist Dimitri Kullmann of University College London, “and even more so, that they show this in adult [mice].”

Indeed, deletion of Er81 specifically from young-adult mice had the same effect as lifelong ER81 deletion, demonstrating that not only was the transcription factor required to establish the cells’ electrophysiological identities, it was also needed to maintain them.

Furthermore, levels of Er81 in the adult animals’ cortices were regulated in an activity-dependent manner. Increasing interneuron activity—either pharmacologically or by training mice to learn a task—decreased the proportion of Er81-positive cells in the cortex, and reduced these cells’ firing delays. Reducing interneuron activity, meanwhile, had the reverse effect.

The revelation that adult mouse neurons can dynamically alter their activites in this way has implications for connectomics, Marin said. “There’s a whole field developing that is trying to understand neuroscience from the perspective of how the [neurons] are connected,” but it is based on the idea that neurons have a fixed identity and function, explained Marin. The changeable nature of neuronal identities “will need to be taken into consideration if we want to understand how the whole thing is working,” he added.