ABOVE: A slice of the medial prefrontal cortex of a naïve mouse stained with markers for the receptors for IL-17a (cyan), inhibitory neurons (green), and excitatory neurons (magenta). COURTESY OF KALIL ALVES DE LIMA

Tcells in the lining of the brain control anxiety-like behaviors in mice, researchers report today (September 14) in Nature Immunology. The findings add to mounting experimental evidence that these immune cells are involved in more than fighting infection and may even contribute to cognitive functions. Commensal bacteria in the gut influence those T cells and may also shape the animals’ behavior, the scientists’ experiments show.

“I think the biggest, most important finding is that these T cells are releasing a signaling molecule, not in response to any kind of infection or threat, to make sure that mice are not taking unnecessary risk,” says study coauthor Kalil Alves de Lima, an immunologist at Washington University in St. Louis (WUSTL).

In the study, Alves de Lima and his colleagues performed a detailed investigation of gamma delta T cells. These immune cells reside in tissues throughout the body, including the dura mater, the tough, outermost layer of the meninges. Called the “skin of the brain,” by Alves de Lima and others, the meninges is a set of three spongy membranes that line the skull and spinal cord and separate nerve tissue from the rest of the body.

Diving into the literature, Alves de Lima found past studies probing the proinflammatory cytokine’s role in fighting infection, as well as its contribution to autoimmune disorders, such as rheumatoid arthritis, lupus, and multiple sclerosis. Until recently, though, there had not been many studies exploring the cytokine’s effect on behavior and cognition. A 2016 study showed that mouse pups born to mothers injected with a virus or synthetic double-stranded RNA to spur an immune response during pregnancy have changes in their brain architecture and exhibit autismlike behaviors. If the mouse moms lacked IL-17a, the pups showed no brain or behavioral changes. In addition, pups deficient in the IL-17a receptor also did not have brain or behavioral changes. A 2017 study in C. elegans also showed that the cytokine shaped the worms’ neuronal response to high levels of oxygen.

All of these experiments suggested that IL-17 played a role in something more than microbial defense, says Dan Littman, an immunologist at New York University Grossman School of Medicine. He coauthored the study on autismlike behaviors in mice but was not involved in the new work.

Last year, another team of researchers showed that gamma delta T cells in the meninges of healthy mice release IL-17a, and that the cytokine influences the animals’ ability to make short-term memories. 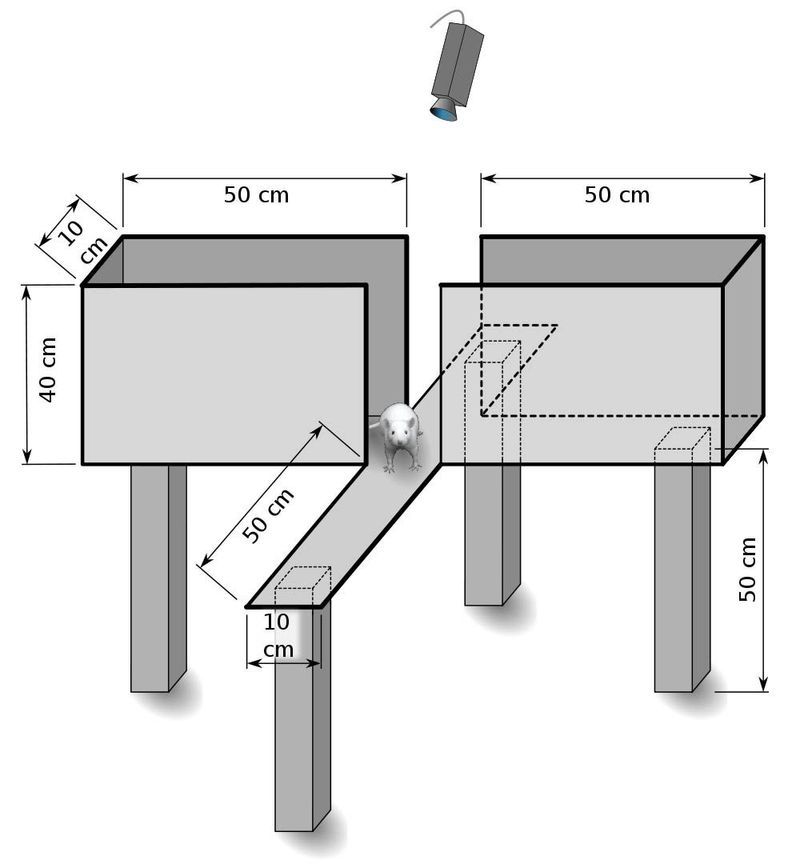 A sketch of an elevated plus maze experiment for behavior tests in rodents
WIKIMEDIA, SAMUELJOHN.DE

In the new study, Alves de Lima, working with Jonathan Kipnis, a neuroimmunologist at WUSTL, also tested the cytokine’s role in mice’s memory and did not find evidence of that connection, but the team did show that IL-17a regulates anxiety-like behavior. When put in an elevated cross-shaped structure with two arms that are open platforms and two that are walled in, mice lacking gamma delta T cells preferred the open arms while wildtype mice preferred the darker, enclosed arms—behavior that, in the study, served as a proxy for anxiety. For the mice, the anxiety is beneficial, protecting them from exposure to predators, the scientists say. (Littman notes that there may be other ways to interpret the mice’s behavior in these experiments.)

The differences in behavior appeared again when the team put the mice in an open arena. There, the gamma delta T cell–deficient mice wandered out into the middle of the arena, while their wildtype counterparts stayed close to the arena walls.

Continuing experiments on IL-17a, the team tracked production of the cytokine using a green fluorescent reporter. The fluorescent protein lit up in all the same spaces of the meninges where the team saw gamma delta T cells, suggesting those cells were producing the cytokine. The mice generated the cytokine even when they weren’t fighting infections. Once again, in the elevated maze and open arena experiments, normal mice stuck to the closed, dark spaces, while mice lacking IL-17a were as bold as mice lacking gamma delta T cells, exploring the open areas of the maze and arena. Another experiment in which the team injected neutralizing antibodies for IL-17a into the animals’ cerebrospinal fluid caused wildtype mice to explore the open areas of the maze and arena, too.

“This exciting new study, beautifully executed by the Kipnis group, adds to the growing list of findings showing IL-17a’s role in modulating animal behaviors,” Harvard University immunologist Jun Huh, who worked with Littman on IL-17a and autismlike traits in mouse pups but was not involved in the new study, writes in an email to The Scientist. “Using multidisciplinary approaches, the Kipnis group also provided mechanistic insights as to how IL-17 brings about such phenotypes.”

Specifically, an analysis of the amount of the IL-17a receptor on neurons showed it was abundant in nerve cells in a region of the cortex essential for assessing threats, but not very widespread in the hippocampus, which plays a role in learning and memory. When the team deleted the IL-17a receptor from neurons in the cortical region, the mice showed less anxious behaviors, mimicking the gamma delta T cell– and IL-17s–deficient mice.

Those experiments once again show that immune cells and their signaling molecules, which scientists typically associate with conventional immunological responses, also participate in physiological functions that have nothing to do with protection from microbial pathogens, Littman tells The Scientist.

Because past studies have hinted that certain commensal bacteria are essential for the T cells in tissues around the body to multiply and become active, and other experiments have found that animals without bacteria in and on their bodies are less anxious than normal mice, the team probed the effect of the microbiome on the meningeal gamma delta T cells. The researchers found germ-free mice had similar numbers of meningeal gamma delta T cells as wildtype mice did, and so did mice treated with broad spectrum antibiotics. However, the germ-free and antibiotic-treated mice had less transcription of IL-17a by meningeal gamma delta T cells. That result suggests gut commensals indirectly affect the production of the cell signaling molecule, which could influence the animals’ anxiety-like behavior.

The result is significant, says Kipnis, because it’s the first time a study has shown a direct link between the gut and meningeal immunity. Gut microbes are known to influence brain activity and, separately, immunity, but their influence on T cells in the meninges has not been demonstrated before this. “It’s a small part of the paper, but important,” he says.

One of the next steps in the research, Alves de Lima says, is to determine if fluctuations in IL-17a levels or activity of gamma delta T cells in the meninges is related to anxiety or depression in mice representing those disorders. “We know that at homeostasis, this molecule is good in mice, and when we take it out, it’s bad,” he says. “But we don’t know if overexpression of these cells in depression models or other neuropsychiatric models would lead to a bad outcome. That is one thing we need to know.”

Alves de Lima also wants to explore meningeal gamma delta T cells in humans to see if IL-17a affects behavior similar to the way it does in mice. If studies show IL-17a is increased in anxiety and depression, “then maybe in the future, we can treat humans with anti-IL-17,” he says. The the work, however, would have to be extremely well-developed, Alves de Lima explains, because IL-17a is so critical to our immune system.