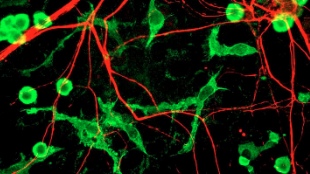 Rett syndrome is a devastating genetic disease in which brain development—along with communication and motor skills—regresses after about 18 months of normal development. While previous work on this disease has focused on its neurological basis, new research published online yesterday (March 18) in Nature suggests that the immune system may be a target worth investigating: in a mouse model of the disease, bone marrow transplants significantly improved symptoms, extending lifespan far and beyond what was expected, increasing size and reducing tremors.

“It’s a very interesting, very provocative paper that could potentially be very important both for the basic biology of the disease as well as translational aspects of it,” said Qiang Chang, who studies the molecular mechanisms of Rett syndrome at the University of Wisconsin and was not involved in the new study. “But I think this is the...

Rett syndrome is caused by many different mutations in the Mecp2 gene, which lies on the X-chromosome and regulates thousands of other genes by binding to and altering methylation marks attached to DNA. Posing a further challenge to understanding the disease’s mechanism, Mecp2 is expressed in many tissues in the body. “Every cell type has methylation, but the methylation patterns may be different cell to cell,” said Zhaolan Zhou, who studies epigenetics and Rett syndrome at the University of Pennsylvania and did not participate in the research. “If that’s the case, Mecp2 may regulate and participate in different pathways in different cells.”

However, because Rett syndrome is a brain disorder, most of the research has focused on Mecp2’s activity in neurons—and not without good reason. “It’s extremely highly expressed in neurons, and it’s thought that the protein plays an important role in the maturation of neurons and brain circuit,” said Chang. Children with Rett syndrome are born essentially “normal” with symptoms showing up some 18 months later, and “that’s the window when Mecp2 is dramatically upregulated” in the brain, he added.

But the new research suggests that brain cells may not present the full picture. After reading a paper published a decade ago about how Mecp2 mutations slow T-cell growth, neuroimmunologists Noël Derecki and Jonathan Kipnis from the University of Virginia School of Medicine decided to further investigate immune system interactions with Rett syndrome.

They focused on microglia, which are “classic immune cells that happen to live in the brain,” said Derecki. Microglia taken from the brains of mice lacking Mecp2 were less able to respond to invaders and “were very much impaired in a number of their functions,” he said. “If the immune system, including the microglia, was functioning in an impaired way, replacing the impaired immune system with a normal immune system might improve the disease somewhat.”

The researchers irradiated 4-week old male mice that lacked Mecp2 to kill off their immune cells—including microglia—and then injected their bones with marrow from normal mice. The idea was that the non-mutated stem cells in bone marrow would generate normal immune cells that then could migrate into and repopulate the brain.

Because male mice only have one X-chromosome, if their single copy of Mecp2 is missing, they are incredibly sick: they live just 8 weeks on average, are small, and have tremors and breathing irregularities. But the mice that received bone marrow transplants survived much longer—“the oldest mouse at this point is just under a year,” said Derecki—and they looked and acted much more like normal mice.

The mice weren’t cured, however; while some of their symptoms  were reduced, the brain cells still carried the mutant copy of Mecp2. “It certainly is a disease of neurons, and the neurons still have their own problems—but it’s also likely a disease of many other cell types,” said Derecki. “We don’t think microglia cause the disease, but we think that when they malfunction, they make the disease much worse."

And the immune system is a particularly appealing target for disease treatment because it’s “much more feasible to target than any other target so far,” added Kipnis. “You don’t have to deal with the brain and delivering drugs across the blood-brain barrier.”

Both Chang and Zhou want to know more about the possible mechanism and to see the results replicated in other labs, but they are intrigued. “The paper suggests that Mecp2 is important for every cell type,” said Zhou. “It’s created a fascinating biological problem to work out.”

The next step is to identify some of the genes that are regulated by Mecp2 in the immune system. “It could be thousands of them; we have no idea how big this mountain is,” said Derecki.