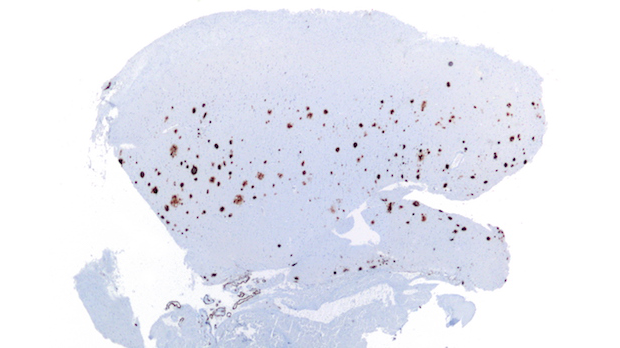 Amyloid-β plaques in a brain histological sample WIKIMEDIA, NEPHRONAmyloid-β proteins form plaques in the brain that are a hallmark of Alzheimer’s disease. Designed to clear these plaques, the antibody aducanumab is demonstrating early success after a year of testing in a Phase 1b clinical trial, according to interim results published today (August 31) in Nature. The results also provide tantalizing—but tenuous—evidence to suggest that the therapy helps prevent Alzheimer’s disease–associated cognitive decline in a dose-dependent fashion.

“What they found was very exciting: that aducanumab treatment was associated with an unusually striking and progressive removal of existing plaques,” said Eric Reiman, executive director of the Banner Alzheimer’s Institute in Phoenix, Arizona, who wrote an accompanying editorial but was not involved in the work.

Previous immunotherapies have shown relatively modest plaque-clearing—“maybe reversing a little bit of amyloid deposition,” Reimer told The Scientist. “But this is the most striking...

Aducanumab, developed by Cambridge, Massachusetts–based Biogen, was discovered in a screen of human memory B cells that produce antibodies capable of binding amyloid-β.

The primary goal of this Phase 1b trial was to determine a safe dose at which antibodies might help clear amyloid-β plaques. The researchers enrolled 165 study participants, 50 to 90 years old, who had either prodromal (asymptomatic buildup of plaques) or mild Alzheimer’s disease. One group received a placebo, while the treatment groups were given one of four doses: 1, 3, 6, or 10 mg of aducanumab per kg of body weight. The scientists administered the antibody or placebo by IV infusion once every four weeks for a total of 14 doses. By the end, 40 patients had dropped out, leaving 21 to 32 individuals per group for analysis.

To determine how the patients were responding to treatment, the team scanned the study participants’ brains. The researchers quantified plaques with PET and the radioisotope 18F-florbetapir, which amyloid absorbs.

By and large, the plaques shrank. Moreover, the team found the higher the dose, the less amyloid-β was present. The largest dose, 10 mg per kg, decreased the standard uptake value ratio—the PET metric for how enriched uptake is in the brain relative to the body—from 1.44 to 1.18, the team noted.

Such a high degree of amyloid-β clearing is unprecedented, study coauthor Stephen Salloway of Butler Hospital in Providence, Rhode Island, said during a press briefing. “Overall, this is the best news that we’ve had in my 25 years of doing clinical research.”

The researchers also explored the drug’s mechanism of action in transgenic mice. Their experiments showed that aducanumab penetrates the brain and targets tight fibrils and soluble oligomers of amyloid. Binding appears to activate microglial cells to engulf the two forms of amyloid-β, the team reported.

To tentatively explore whether the treatment was having any cognitive benefits, the scientists administered the Mini Mental State Examination and Clinical Dementia Rating-Sum of Boxes tests. Patients who received aducanumab showed slower cognitive decline compared to those who received placebo, the team reported, and that effect tracked with dosage level.

Yet other tests—including the more in-depth neuropsychological test battery—failed to reveal cognitive differences among treatment groups, said Ronald Petersen, a neurologist at the Mayo Clinic in Rochester, Minnesota, who has consulted for Biogen, but was not involved in this particular project.

“You could say, ‘Well, gee, why would gross measures be significant and the more finely tuned [tests] not [be]?’” he said. “It’s a good question.”

Petersen advised against assigning too much importance to the cognitive results. “They’re very tentative,” he said, noting that the authors made clear that the study was not statistically powered to rigorously examine any cognitive effects.

Phase 3 trials for aducanumab are already underway. The researchers hope the results of these larger studies will yield more-definitive answers as to whether the immunotherapy can stall Alzheimer’s disease. Another goal is to safely manage a major side effect the team identified in the present study: amyloid-related imaging anomaly, or ARIA, which is detectable by MRI and indicates increased fluid in a patch of cerebral tissue—a sign of edema or microhemorrhage. ARIAs were most often observed in patients who received higher doses of the drug, and were more likely in carriers of an ApoE variant (ε4) associated with increased amounts of amyloid-β. At the highest dose, 41 percent of patients developed edema ARIAs for which the most common symptom was headache. Among that subset of study participants, 44 percent discontinued treatment.

Experts don’t yet know why ARIAs develop. “One theory is that there are amyloid deposits in the walls of blood vessels in some people with Alzheimer’s disease, and those can be affected by the antibody,” said Salloway. Inflammatory factors or the initial clearing of plaques to the vasculature could also lead to the ARIAs, he added.

Managing ARIAs will be a key issue that the Phase 3 trials must tackle, Fabrizio Piazza, an ARIA expert at the University of Milano-Bicocca in Italy, told The Scientist. “It’s a critical point for me,” said Piazza, “because if we use a suboptimal dose, we cannot have the same beneficial effect.”