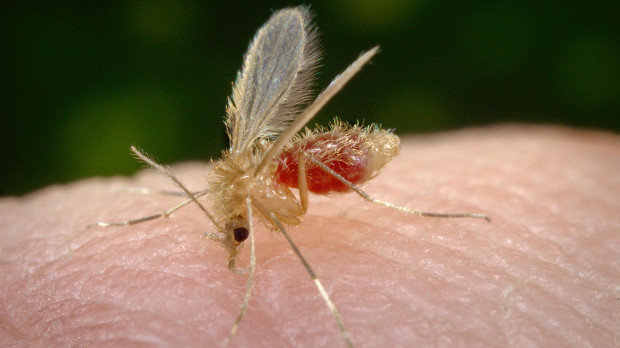 Sand flyWIKIMEDIA, JAMES GATHANYProtozoan parasites of the Leishmania genus cause leishmaniasis—a spectrum of diseases that can be disfiguring, debilitating or even deadly. Residing in the guts of blood-sucking sand flies, the parasites are transmitted to humans and other mammals when the flies bite. Now, scientists have discovered that, along with the parasites, the flies expel parasite-derived vesicles called exosomes into their mammalian hosts. According to a paper published in Cell Reports today (October 22), these exosomes ramp up inflammation and boost parasite numbers during infection.

“[The work] adds to the collection of vector-associated factors that promote infection following transmission of Leishmania by sand fly bite,” said parasite biologist David Sacks of the National Institute of Allergy and Infectious Diseases (NIAID) in Bethesda, Maryland, who was not involved in the study. “It reinforces the point that sand flies are not just flying syringes, they don’t just deposit parasites...

Indeed, aside from regurgitating parasites into a mammal’s skin when it feeds, a sand fly spews salivary proteins, a parasite-secreted gel, and other factors, all of which influence the development of infection and outcome of disease, explained microbiologist and immunologist Nathan Peters of the University of Calgary who also did not participate in the study.

The release of exosomes—small vesicles that function in intercellular communication—from Leishmania had been observed in lab-grown cultures of the parasite, but never in vivo, said Martin Olivier of McGill University in Montreal who led the new study. “I thought, is it an artifact or not?”

Olivier contacted his colleague Shaden Kamhawi at NIAID and “asked her for the guts of some sand flies,” he said. Electron microscopy of the insects’ guts revealed that, sure enough, the parasites were emitting exosomes. Proteomic analysis of these gut-recovered exomsomes then confirmed “that they were very similar to the [exosomes] from cultured parasites,” said Olivier.

“It’s a nice transition from the in vitro work that laid the [foundation] for what the exosomes were doing . . . right into the most physiological setting,” said Peters.

The team then showed that the flies expelled the exosomes as they fed on vesicle-free blood plasma through a chicken skin membrane—a model system for studying how the insects suck blood.

To examine whether the exosomes influence the biology of infection, the team injected mice with L. major—a species of the parasite that causes cutaneous leishmaniasis—with and without parasite-derived exosomes. They found that coinjection of the parasite with its exosomes evoked a bigger inflammatory response, caused larger skin lesions, and allowed higher numbers of the parasites to accumulate than if the parasites were injected alone. The exosomes “were exacerbating the pathology,” Olivier said.

Once inside the mammalian body, Leishmania parasites hide inside the very immune cells sent to destroy them, explained Olivier. So by increasing the inflammatory response, it is possible that the exosomes “will attract more cells to the site, like neutrophils and monocyte-macrophages . . . so the parasite will be able to infect more cells,” he suggested.

This ability of Leishmania to stow away inside immune cells is part of the reason that vaccine development has been unsuccessful. “We’re pretty confident that the conventional prime-boost antibody-generating vaccine paradigm isn’t going to work for these infections,” said Peters. “The rules are different.”

One possibility might be to use exosome components in vaccines, he said. Such a vaccine might neutralize exosomes’ ability to exacerbate infection. “We need alternative vaccination strategies,” he said. “We have to start really thinking about how these pathogens initiate infection and how can we thwart these different mechanisms.”