The current pandemic has shown how viruses such as SARS-CoV-2 can be shed while breathing, coughing, or sneezing, even when wearing a mask. Now, a new study using guinea pigs hints at an additional transmission mechanism: the animals spread influenza to their neighbors via airborne dust, dander, and fur, and the vast majority of airborne particulates emitted from the guinea pigs came not from their breath, but from dust they kicked up, the authors reported August 18 in Nature Communications. The experiments did not assess whether the coronavirus can be transmitted similarly.

“It’s really shocking to most virologists and epidemiologists that airborne dust, rather than expiratory droplets, can carry influenza virus capable of infecting animals,” William Ristenpart, a chemical engineer at the University of California, Davis, and a coauthor on the study, says in a press release. “The implicit assumption is always that airborne transmission occurs because of respiratory droplets. . . . Transmission via dust opens up whole new areas of investigation.”

The team carried out several experiments to determine how many particles the animals were generating, whether virus-laden dust could move to other cages, and once there, if the viral particles were capable of infecting other guinea pigs.

First, the researchers used an aerodynamic particle sizer to monitor the microscopic dust released by guinea pigs in their cage. The number of particles depended on how active the animals were, Ristenpart tells Popular Science, and the most energetic rodents released up to 1,000 particles per second. Later, after the same animals had been infected with influenza, the team found the virus on their fur, ears, and paws. Because guinea pigs don’t sneeze when they have the flu, researchers say the virus may end up on different parts of the animals as they walk and groom.

Lisa Marr, an environmental engineer at Virginia Tech who was not involved in the study, tells Popular Science that this “personal cloud of aerosols” is sometimes referred to as the “Pigpen Effect,” named after the Charlie Brown character. She adds that humans too kick up dust in this way, in addition to breathing out respiratory particles.

To filter out the proportion of aerosols produced by breathing, Ristenpart next created what he calls “guinea pig burritos,” wrapping anesthetized animals in a small aluminum sleeve to block dust particles. The team measured the particles the animals breathed out of a small hole left for their noses. The captured particles were much less abundant than in the previous experiment, showing that airborne fomites are responsible for most of the particles given off by guinea pigs.

Lastly, Ristenpart and his colleagues needed to show that these particles were capable of infecting other animals at a distance—many viruses, including SARS-CoV-2, can reside on contaminated surfaces, but may not remain infectious for long outside of a host.

Once the infected guinea pigs had recovered and become immune to the flu, the researchers painted influenza onto their fur and placed the animals in cages separated from, but near, cages with an uninfected guinea pig inside. In three of the 12 pairs, the second rodent fell ill, indicating that the virus was moving through the air, potentially from dust and dander.

Taken together, this work “suggests that there is a mode of [virus] transmission that is underappreciated” for influenza, Ristenpart tells Science News, adding that only “dust liberated from a virus-laden surface” is likely to be infectious.

Further research is needed to determine whether these findings apply to COVID-19, although they are in line with observations from previous studies. For example, work published in Nature in April found that in two hospitals in Wuhan, the concentration of the virus was higher in the rooms where medical professionals changed out of their PPE than in patients’ rooms, Popular Science reports. The authors suggested this might be due to dust and microscopic fibers shed by the clothing. In addition, Ristenpart tells Science News about another of his studies, currently undergoing peer review, in which he analyzed the fibers shed by cotton face masks.

Not everyone agrees the results of the current study will translate into humans. Julian Tang, a virologist and fluid dynamicist at the University of Leicester who was not involved in the study, tells Science News it may be that dust kicked up from guinea pig bedding simply aerosolizes more easily than human sources such as clothing or bedding. “I’m really not convinced that in humans, this aerosolized fomite route will play any [major] role,” Tang says. 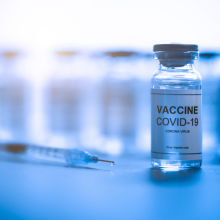