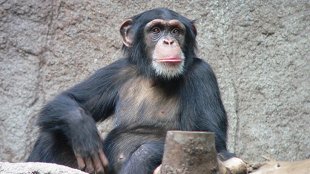 WIKIMEDIA, THOMAS LERSCHTests of spatial memory, tool use, communication, and other cognitive abilities in chimpanzees have revealed that aspects of intelligence, including general intelligence, are inherited. The results, published today (July 10) in Current Biology, complement similar findings from human studies, and lend support to the theory of general intelligence—wherein an individual’s overall cognitive prowess influences his or her more specific abilities.

“This is really major evidence that . . . those estimates of the heritability of human intelligence are probably dead on,” said Alexander Weiss, a psychologist at the University of Edinburgh in the U.K., who was not involved in the study. “Anyone sensible and objective looking at this, who had any doubts about the heritability of human intelligence . . . should put those worries to rest.”

Although a great deal of evidence suggests that a person’s brainpower is in large part attributable to that...

“Chimps [in captivity] don’t have things like parents sticking books in front of them,” he added, so they allow genetic investigations of intelligence “without the confounding effects of these variables that are difficult to control in human societies.”

In Hopkins’s study, 99 chimps were subjected to 13 different tests covering a range of specific cognitive skills. The team then applied a statistical process called a principal component analysis (PCA), which essentially identified links between the individual tests. That is, the PCA determined whether an animal’s ability in one test was linked to its ability in any of the other tests. If such links were found, those tests were lumped together into one subgroup, or component. From this analysis, the 13 cognitive tests were divided into four components.

“Some people think you can partition or parcellate intelligence . . . so you have a logical arithmetic one, and a language one, and a music one,” said Hopkins.  But, said Weiss, “[Hopkins’s study] is a really strong piece of evidence in favor of general intelligence—the view that there is a single underlying factor for intelligence.”

Hopkins said that, with enough animals, similar GWASs could be performed in chimpanzees. Candidate genes could then be compared between humans and chimps to see how the genetic component of the two species’ intelligence has evolved.

Ultimately, it is probably no surprise that, like human intelligence, chimp intelligence is heritable, given that “we were the same species for 23 million years,” said Sally Boyson, a professor of psychology at Ohio State University. However, it had never actually been confirmed, she said. “We can surmise, we can speculate, we can think, ‘Oh, probably,’ but [Hopkins’s group] went out and did it.”