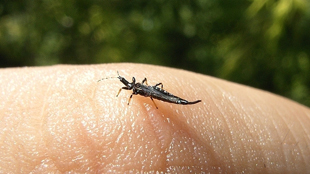 The soldiers of social insect colonies often boast spectacular weapons, such as massive jaws or armored legs, to defend their colonies from invaders. But a new study has found that the enlarged forelimbs of tiny soldier thrips, slender insects only 1 millimeter long, do not bestow much of a fighting advantage. Instead, it appears the so-called “thunderbugs” (because the wind transports them far distances during thunderstorms) are armed with antimicrobial compounds to fight much smaller enemies: microscopic fungi.

The finding, published today (April 10) in Biology Letters, suggests that microbes may have been important selective agents in the evolution of solider insects.

“It’s been somewhat overlooked that one of the consequences of social cooperation is big colonies, which are prime conditions for pathogens,” said Bernard Crespi, a biologist at Simon Fraser University in Burnaby, British Columbia, who was... To compare thrips forelimb morphology and fighting ability, Holly Caravan and Thomas Chapman at Memorial University in Newfoundland, Canada, placed individual male or female thrips soldiers (Kladothrips intermedius) in test tubes against rival thrips (Koptothrips dyskritus) to see if the larger-forelimbed females were more effective fighters than the lesser-equipped males. “We expected to see that the males with smaller forelimbs would be less effective than the females, but there was no difference at all,” said Caravan. “The forelimbs weren’t as important as we thought.”

But then their team joined forces with researchers at Macquarie University in Australia, who had discovered that thrips soldiers excrete antimicrobial compounds. The Australian team rinsed groups of 100 thrips—either solider thrips or worker thrips—then tested the resulting liquid against an insect fungal pathogen, Cordyceps bassiana. The rinse from the soldiers was effective at suppressing fungal growth, while the rinse from the workers was not. The new evidence—both the uncertain role of the forelimbs and the strong antimicrobial activity—suggests that soldier thrips evolved primarily to fight microbes, the authors wrote.

But not everyone is convinced. “If it really is mainly antifungal activity that is selecting for the caste, why would you see the big forelegs?” asked Crespi, who studies thrips. “Having watched these guys for hundreds of hours, there’s no doubt in my mind that the primary selective pressure for the soldiers is [physical] defense."

The team had the same question, and is “looking now to see if maybe these forelimbs are an adaptation to harbor a symbiont that may be producing the antimicrobial activity,” said Caravan. Memorial researchers have already isolated two antimicrobial-producing bacterial species from thrips communities and are currently working to identify the species and see if they are living within the thrips soldiers’ forelimbs.

“It’s a really neat system,” said Claire Fuller, who studies termites and their parasites at Murray State University in Kentucky and was not involved in the research. Certain species of ants and termites have also been found to harbor or secrete antimicrobials, she noted. “It’s great to have a different group to compare the better studied groups with.”