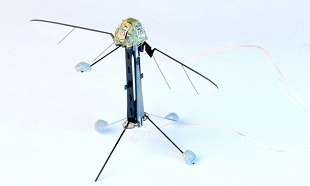 HARVARD, SAWYER FULLERResearchers have developed a tiny flying robot with a self-stabilizing feature inspired by ocelli, the light-sensing organs of insects, according to a study published today (June 18) in the Journal of the Royal Society Interface. A team from the Microrobotics Lab at Harvard University, led by Robert Wood, is one step closer to its goal of developing an autonomous, insect-sized flying robot. The researchers’ findings might also help entomologists better understand the role ocelli play in insect flight stabilization.

“There are very few people trying to do this at this scale,” said bioroboticist Barbara Webb of the University of Edinburgh, who was not involved in the work. “It makes everything more difficult, but also makes it more realistic as a model of the insect. I’m impressed by what they’ve managed to do.”

Last year, the team published a paper in Science describing its efforts to create a bee-sized robot, dubbed RoboBee, and early flight tests. The robot, weighing about 100 milligrams and not much larger than a penny, could hover and fly a preset route on two lightweight wings. At this size, power sources and navigation sensors must remain off-board and connected to the robot via thin wires—no one has yet made batteries, cameras, or processors that small.

The current paper details the development of a basic light sensor to keep the robot stabilized during flight. “Recently, the emphasis has changed from how do you fabricate the vehicle to, now, how do you put sensing onboard,” said coauthor Sawyer Fuller, a postdoctoral researcher in Wood’s lab. “The ocelli is really the simplest possible sensor that we could think of.”

Larger robots can be outfitted with cameras, lasers, or GPS devices for navigation. But when a robot is only a few centimeters in length, factors such as sensor size and even the thickness of wires become challenges. “When you get down to this scale, the traditional approaches in robotics don’t work,” said Fuller. “You have to throw out 50 years of robotics and start again.”

The researchers outlined the mathematical theory behind the flight dynamics of the RoboBee and described how ocelli-like sensors can help stabilize it. “Without any feedback, it flips on its head and crashes,” said Fuller. The light sensor, mounted at the top of the robot, is like a single pixel in a digital camera: it registers changes in light and converts those to voltage. This information helps the robot register the horizon. The robot then uses this information to estimate its pitch and roll, and adjusts the rate at which it flaps its wings in a feedback loop to compensate and stay upright. Fuller explained that the robot is like a swinging pendulum: its wings dampen that pendulum motion using information provided by the sensors.

In field tests, the robot was able to stabilize itself for short durations of about half a second, or 50 wing strokes. Because of its delicate components, the robot is not yet able to fly for much longer, but Fuller says that corrections the team is making to the robot’s design should allow longer flights within a matter of months.

Microrobots don’t just borrow from the insect world, they can also inform entomological research. Scientists still don’t understand how some insects, such as bumblebees, are able to stabilize themselves during flight, or the precise function of ocelli. Having an engineered model like the RoboBee gives researchers another avenue to explore how insects have evolved solutions to the challenges of flight. The current results “suggest that the ocelli measure the angular velocity of light patterns in three dimensions caused by the motion of the insect, and that the measured angular velocities are used to compensate the attitude of the insect,” Dario Floreano, director of the Swiss National Center of Robotics, told The Scientist in an e-mail.

However, Steven Wiederman of the University of Adelaide in Australia, who studies visual systems in insects and bioengineering, said the role ocelli play may not be that simple, noting that many insects are able to stabilize during flight even with their ocelli occluded. “As is often the case in bio-inspired engineering, the complete story will be complicated,” he wrote in an e-mail to The Scientist. “This is to be expected when dealing with systems that evolved in a ‘laboratory’ hundreds of millions of years old and the size of the Earth.”

Webb and Floreano noted that because of the limitations of the flight tests—the short duration and their tethered nature—it is difficult to accurately gauge how well the robot self-stabilizes.

Fuller said that his team is working to not only improve the robot to allow longer flights, but also toward miniaturizing the power sources and processors, so as to eventually place these critical elements onboard. Although fully autonomous insect-sized robots are still likely several years away, he said there are many applications for such machines, such as performing search flights through tough-to-navigate disaster sites. “You start thinking,” said Fuller, “what would you want to do with a tiny robot like this?” 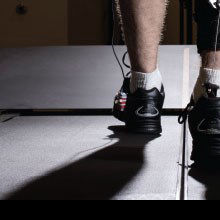