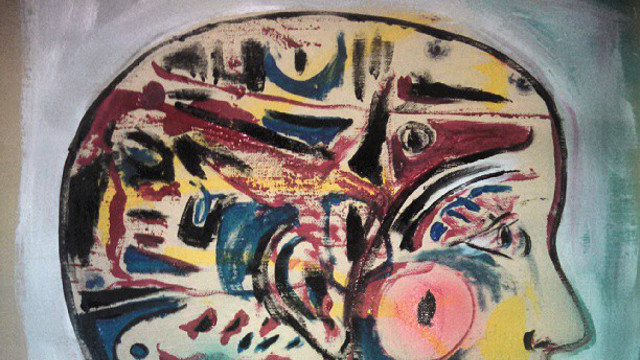 Dean Cercone, “Ode to its Cortex and its Illuminated Manifestations”TRICIA MACKENZIEArtists tend to resist the idea that creativity has a cause—that the inspiration to produce original work can be isolated or reduced to some elementary physiological process, like a chance firing of neurons. Decades of neuroimaging research support their resistance of that notion, having raised more questions than answers about what spurs the creative process.

But curious researchers have come up with creative ways to investigate art and the brain. And such curiosity meets creativity in a lively and arresting way in “illuminated dissolved humanity cortex manifestations,” a collaborative exhibition-experiment co-led by Tricia MacKenzie, being held at the Inter Space gallery she runs in New York City. As part of the exhibition, painter Dean Cercone dons an EEG headset that records his neural activity while he goes about his work.

While interesting, MacKenzie cautioned against extrapolating the results of her EEG experiment on Cercone, given the sample size of one.

“What I learned from Dean is that he paints according to two epochs,” she said. “He has a planning phase that lasts for about three seconds, where he uses the prefrontal cortex, and he actually does not have activity in the occipital lobes, which [have] more to do with vision. So he’s more seeing with the cognitive part of his brain; he’s not seeing with the visual part of his brain.”

The second phase, MacKenzie explained, typically last a few minutes. “He’s using his occipital lobes for that, as well as the prefrontal cortex and the temporal lobe,” she said. “He’s more pulling stuff from vision.”

MacKenzie next plans to open her experiment up to other participants in the hopes of picking out patterns of brain activity from the creative process. She hopes to also combine these experiments with genomic studies to identify the genes associated with creative expression.

More broadly, MacKenzie noted that artistic-scientific collaborations such as her own will enhance communication of science to the public.

“I think at the heart of this space, beyond the research, is more social—trying to bring cultural influencers and scientists together,” she said. “Hopefully we can create a little change in how scientists communicate with the world, and artists can help scientists to create a more sustainable environment for everyone.”