Alakananda Dasgupta is a freelance science journalist based in New Delhi, India, who contributes to The Scientist. She is a medical doctor and a pathologist by training. In 2018,...

ABOVE: A hyperactive bradykinin system permits fluid, shown in yellow, to leak out of a blood vessel and allows immune cells, shown in purple, to squeeze out as well.
JASON SMITH/ORNL, US DEPARTMENT OF ENERGY

On a Sunday afternoon in mid-April this year, Daniel Jacobson, a computational systems biologist at Oak Ridge National Laboratory in Tennessee, was looking at gene expression data from the lung fluid of COVID-19 patients on his computer screen when he spotted something striking—the expression of genes for key enzymes in the renin-angiotensin system (RAS), involved in blood pressure regulation and fluid balance, was askew.

Jacobson followed this abnormal RAS in the lung fluid samples to the kinin cascade, an inflammatory pathway that is tightly regulated by the RAS. He found that the kinin system—in which a key peptide, bradykinin, causes blood vessels to leak and fluid to accumulate in tissues and organs—was thrown out of balance as well in COVID-19 patients. Infected individuals showed heightened expression of genes for the bradykinin receptors, as well as for enzymes called kallikreins that activate the kinin pathway, compared with controls.

The results, published July 7 in eLife, could perhaps explain the abnormal accumulation of fluid in the lungs that is so common in COVID-19 patients, the authors say.

Unbeknownst to Jacobson, Frank van de Veerdonk, an infectious disease specialist at the Radboud University Medical Center in the Netherlands, was heading down the same molecular pathway in mid-March. He had noticed two features in COVID-19 patients in his clinic—fluid in the lungs and inflammation. Because other labs had pegged angiotensin-converting enzyme-2 (ACE2), a key enzyme in the RAS, as being the SARS-CoV-2 receptor, and because he knew that ACE2 regulates the kinin system, van de Veerdonk began connecting the dots. In April, he and his group hypothesized that a dysregulated bradykinin system was leading to leaky blood vessels in the lungs and perhaps causing excess fluid to build up.

Josef Penninger, director of the Life Sciences Institute at the University of British Columbia in Vancouver who discovered that ACE2 is the essential in vivo receptor for SARS, tells The Scientist that he is convinced that bradykinin plays a role in COVID-19 pathogenesis. “It does make a lot of sense.”

He adds that Jacobson’s study lends support to the hypothesis, but further confirmation is needed. “Gene expression signatures don’t tell us the whole story. I think it is very important to actually measure the proteins.”

van de Veerdonk recognizes that peptide levels need to be measured and is currently setting up mass spectrometry to measure kinins in the plasma, which have a half-life in plasma of just a few seconds.

In the meantime, Jacobson and his coauthors advocate in their paper for targeting the bradykinin pathway to counter the excess fluid present in the lungs of COVID-19 patients. As there are already a couple of approved drugs that can interfere with the kinin pathway, doctors have begun deploying them in a number of clinical trials.

A common theme that underpins many of the disease manifestations of COVID-19, such as acute respiratory distress syndrome (ARDS), is inflammation and edema, or fluid build-up. An assorted cast of leaky blood vessels, immune cells (as well as the cytokines and other molecules produced by them), and plasma proteins such as clotting factors, bradykinin, and other kinins assume center stage in this spectacle of acute inflammation.

Activation of the kinin system in the context of blood clotting—which can be dysregulated in some COVID-19 patients—generates bradykinin and related peptides through two distinct pathways: the plasma kallikrein pathway (activated by a clotting factor called the Hageman factor) and the tissue kallikrein pathway (activated by tissue enzymes and plasmin, an enzyme in the fibrinolytic system that breaks down clots in the bloodstream). Bradykinin is then converted to des-Arg9-bradykinin (DABK). When bradykinin and DABK bind to their corresponding receptors, B2R and B1R, respectively, fluid begins to leak from blood vessels. 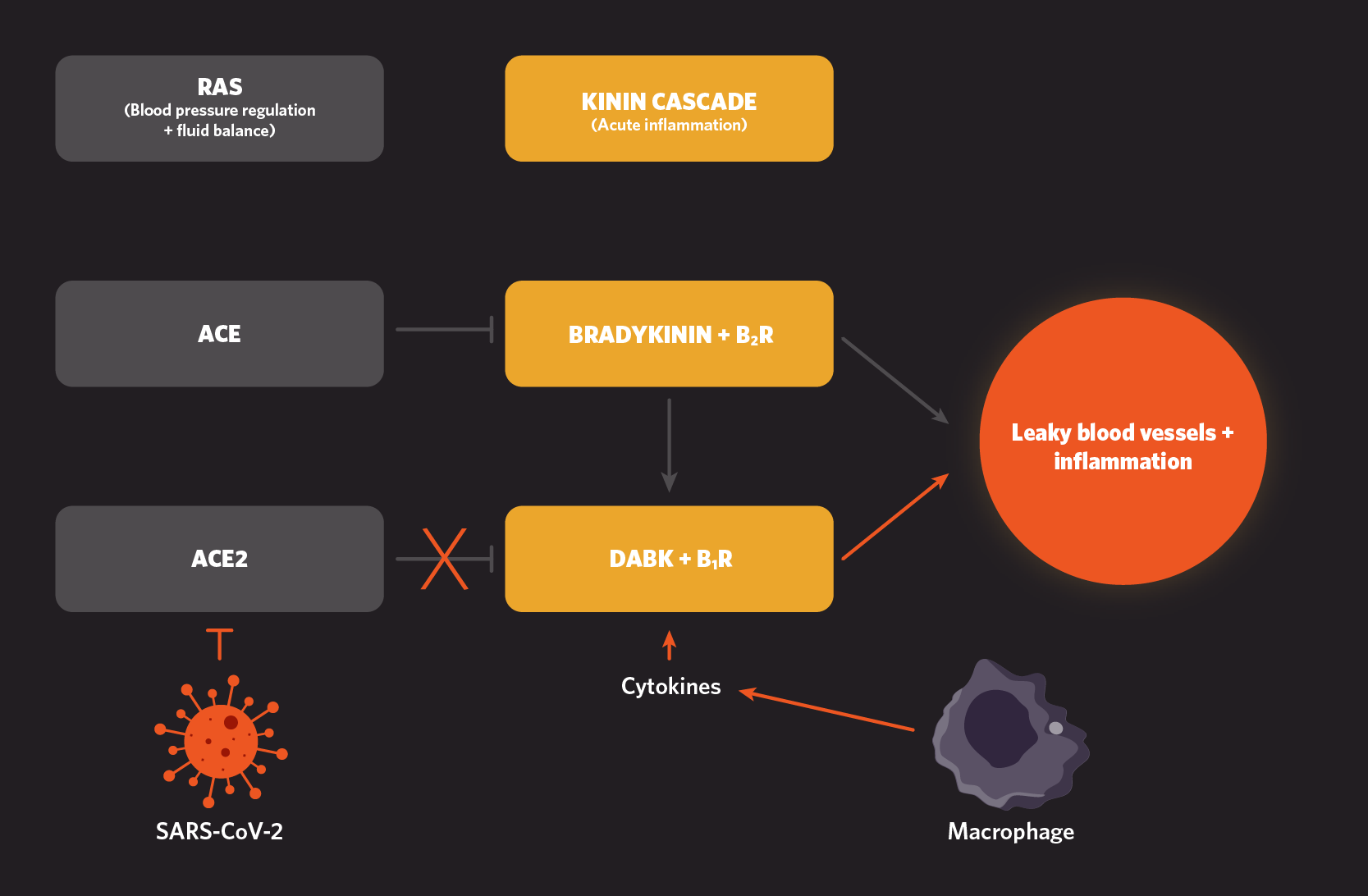 The leaky blood vessels and lung fluid build-up in some COVID-19 patients might be explained by the virus’s corruption of an inflammation safeguard, namely, ACE2’s degradation of DABK. Read the full description of the pathway here.
the scientist staff

The RAS pathway tightly controls the kinin system. ACE breaks down bradykinin, while ACE2 breaks down DABK. ACE and ACE2 therefore act as regulatory brakes in the kinin system. But because ACE2 combines with SARS and SARS-CoV-2 and is internalized into the cell during infection, extracellular levels of the enzyme might drop, and, according to van de Veerdonk’s hypothesis, the bradykinin cascade then goes into overdrive.

“As part of the explanation of COVID pathophysiology, it makes perfect sense, but it’s one piece of a very large and complex puzzle and it only partly helps us explain and understand better a very difficult disease,” says David Fedson, a retired general internist who is interested in developing treatments for pathogens that cause pandemics. Now it’s up to physicians to connect the dots and ask, “how is that meaningful and what can I do about it?—which is the most important question.”

Penninger, who is the founder of a company that is testing ACE2 as a treatment for lung failure in a Phase 2 trial in COVID-19 patients, agrees.

Targeting the bradykinin pathway in COVID

Currently, there are two approved drugs that target the kinin system: icatibant (a B2R blocker) and the monoclonal antibody lanadelumab, which inhibits plasma kallikrein (there are no drugs yet approved that inhibit tissue kallikrein). van de Veerdonk contends that targeting the kinin system early in the disease, soon after a patient is hospitalized, and is hypoxic, but hasn’t yet developed ARDS, might be helpful.

That is what his group found in a small exploratory study published this month. COVID-19 patients taking icatibant showed marked improvement in oxygenation as evidenced by a substantial decrease in need for supplemental oxygen, compared to control patients.

Allen Kaplan, a professor at the Medical University of South Carolina and an expert on bradykinin who was not connected with the study, tells The Scientist that this preliminary observation supports the idea that icatibant might be helpful “and should therefore be studied in a double-blind placebo-controlled fashion [in COVID patients].”

Another multicenter randomized clinical trial in the US is testing icatibant in critically ill COVID-19 patients in the ICU.

A clinical trial in Cleveland is testing lanadelumab in COVID-19 patients with pneumonia.

van de Veerdonk’s group is also testing the plasma kallikrein inhibitor (which is being supplied by Takeda, a company that also manufactures icatibant) in a multicenter clinical trial in the Netherlands in hospitalized COVID-19 patients receiving supplemental oxygen, to see whether the drug decreases the need for oxygen.

If all goes well for van de Veerdonk and his team, lanadelumab will be integrated into the REMAP-CAP trial that is evaluating several drugs for community-acquired pneumonia in thousands of patients across several countries and includes COVID-19 patients in one arm.

Kaplan has his reservations, and notes that using the monoclonal antibody against plasma kallikrein in COVID-19 could be interesting, but if it turns out that tissue kallikrein is more important in the disease, it won’t work.

Clarification (August 27): The seventh paragraph initially indicated that van de Veerdonk is currently using mass spectrometry to measure kallikreins in the plasma of COVID-19 patients and that it was impossible to do the same for bradykinin, which has a half-life in plasma of just a few seconds. This has now been changed to clarify that van de Veerdonk is currently setting up mass spectrometry to measure kinins in the plasma, which have a very short half-life.