When the 18th-century biologist Carl Linnaeus classified a group of animals as “mammals,” he based the name on one key characteristic—mammary glands, from which females produce milk to feed their young. While lactation is a common feature among mammals, it turns out that it isn’t unique. Scientists have since learned that some nonmammalian creatures also make milk to feed their young. Cockroaches, for example, nourish their developing embryos with a milky, protein-rich fluid. And a new study, published today in Science, reveals that at least one other invertebrate species, the ant-like jumping spider Toxeus magnus also produces milk to feed its young.

“There are not very many cases of feeding with secretions like this outside of mammals,” says James Gilbert, a zoologist at the University of Hull who was not involved in this work. “Invertebrates never fail to amaze you.”

There were several potential explanations for where the offsprings’ nutrition came from, Chen says, such as trophic eggs (unfertilized eggs stockpiled for food) or regurgitation (when a parent vomits up food they ate to feed its young). But the team’s observations led them to another, unexpected possibility. While recording data on the growing spiders’ body sizes one evening, Chen spotted some spiderlings attached to their mother’s body—it looked to him just like a mammal latching on to its mother’s breast. “I had many hypotheses, but this one was not included,” Chen tells The Scientist. “At that point, I was so excited, I couldn’t sleep.” 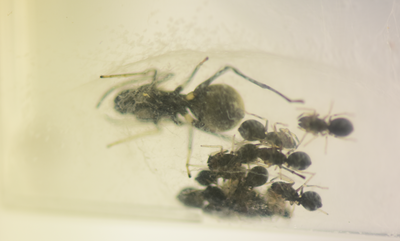 This startling finding jumpstarted a series of additional experiments. When the researchers peered at the critters under a microscope, they discovered that mothers excreted a milk-like substance from their epigastric furrows, an abdominal opening from which they lay eggs. These secretions “really looked like the milk of mammals,” says study coauthor and Chen’s lab leader Rui-Chang Quan.

The team then analyzed the milk’s contents and found it was composed of sugar, fat, and four times more protein than cow milk. They also demonstrated that the milk was crucial for offspring survival: When the researchers blocked the mothers’ epigastric furrows, spiderlings died within 10 days of hatching.

During the first 20 days after emerging from their eggs, the hatchlings fed exclusively on their mother’s milk. Afterward, the spiderlings started leaving the nest to forage, but kept consuming the milk for another few weeks, stopping only shortly before reaching sexual maturity. According to Chen, this extended period of lactation—and the close mother-offspring interaction—is more similar to the process typically observed in mammals than in cockroaches, which only use their milk to nourish developing embryos.

“They demonstrate parallels to mammal-like maternal care that are very robust,” says Eduardo Santos, a behavioral ecologist at the University of São Paulo in Brazil who did not take part in the study. “This is really cool.”

Chen, Quan, and their colleagues have several remaining questions they hope to tackle in future experiments. For example, they plan to investigate whether the spiders, like mammals, produce milk in mammary glands, and to probe for other invertebrate species that display similar parenting behaviors.

“[This] study makes me wonder what's going on in other spiders and other organisms,” says Hope Klug, a biologist at the University of Tennessee at Chattanooga who was not involved in this work. “It’s quite possible that there’s a lot more parental care going on in nature than we appreciate.”