An unusual experiment suggests that interrupted REM sleep can interfere with the amygdala’s ability to process emotional memories overnight—in this case, the distressing memories of listening to oneself sing out of tune.

About two years ago, 29 people visited a neuroscience lab in the Netherlands to sing karaoke. Wearing muffled headphones so they could hear the music but not their own voices, it was almost inevitable that they would sing “Silent Night” or the Dutch national anthem out of tune.

Dutch researchers recorded each individual sing, then played the recording back to him or her. Listening to themselves sing solo evoked feelings of shame and embarrassment and sparked higher-than-normal activity in the subjects’ amygdalae. Fortunately for some study participants, a good night’s sleep was enough to lessen the amygdala’s response when they listened to the recording again the next day. But others who had experienced restless sleep—specifically poor-quality REM, or rapid eye movement, sleep—experienced the opposite: their amygdalae were just as sensitive, if not more, to the recording the next day.

The findings suggest that poor-quality REM...

“Prior research has made clear the benefits of sleep—and REM sleep in particular—for the ability to regulate emotions,” notes Elizabeth Kensinger, a neuroscientist at Boston College who was not involved in the study, in an email. “But the present research goes farther in demonstrating—in humans—that there are variants of REM sleep that can be harmful to that ability to process emotions.”

What is remarkable, however, is that when REM sleep is sufficiently disrupted, its typically beneficial effects on amygdala function can disappear. . . . It’s not just the amount of REM sleep that matters, but the [quality].

None of the study participants had a psychological disorder, but some reported varying degrees of insomnia. To study coauthor Eus Van Someren, a neuroscientist and head of the Sleep and Cognition department at the Netherlands Institute for Neuroscience, the group was ideal for investigating whether sleep disturbances would have any impact on the brain’s processing of emotional information overnight, which is thought to occur during the REM sleep phase. Investigating this question may shed light on why people with anxiety and other psychological disorders are prone to poor-quality REM sleep, one of the overarching questions his lab is exploring.

Other researchers often use images of guns or snakes to elicit emotional responses in people. But Van Someren, who has experience as a musician, felt that forcing his study participants to listen to themselves sing out of tune would be a stronger, more immediate trigger—an approach he’s validated in previous research. He recalls testing the approach on himself: “it was awful, I saw the sweat in the palms of my hands.”

Indeed, participants described their experience listening to themselves sing as “embarrassing” and associated with “shame” on an emotional rating scale. And accordingly, their amygdalae, the brain regions thought responsible for these and other emotions such as fear, flared with heightened electrical activity, Van Someren and his colleagues observed as participants listened to fragments of their songs while lying in a functional magnetic resonance imaging (fMRI) machine.

Participants then spent the night in a sleep lab. According to electroencephalogram (EEG) monitors, the participants’ REM sleep patterns varied greatly. Some individuals experienced “restless” REM sleep, enduring brief, interruptive spurts of arousal as often as 25.5 times per hour, while others enjoyed more restful REM sleep with only 6.8 interruptions per hour. The next day, participants listened to themselves singing a second time while in the fMRI machine, and the scientists compared the participants’ amygdala activity to the data recorded the previous day. 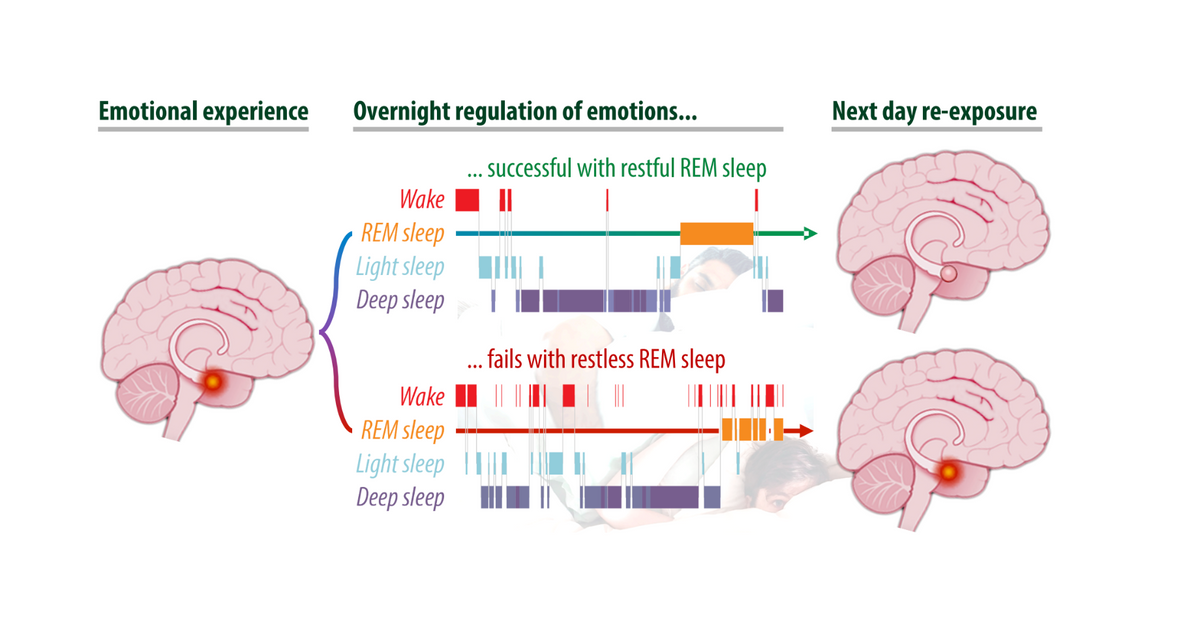 Making people listen to a recording of themselves singing out of tune provokes feelings of embarrassment and shame, and heightened activity of the brain's amygdala (left). After uninterrupted REM sleep, the amygdala habituates to this experience overnight, and is less sensitive to the recordings the following day. However, following poor-quality, interrupted REM sleep as is common in people with depression, anxiety and PTSD, the amygdala doesn't recover and tends to be even more reactive to the recordings the following day.
Rick Wassing, Woolcock Institute of Medical Research, Australia

Doctoral student Rick Wassing found a striking statistical correlation between the participants’ quality of REM sleep and the reactivity changes of their amygdalae from one day to the next: the amygdalae of participants who had fewer interruptions during REM sleep tended to be less sensitive to the recording during the post-sleep fMRI session. Conversely, the more interrupted participants’ REM sleep had been, the more reactive their amygdalae. “If you have that fragmented REM sleep, maybe whatever is processed during the night isn’t processed well,” and the amygdala, the “siren of the brain” continues to go off, Van Someren says.

Based on previous research, normal processing of emotional memories during REM sleep requires synaptic connections in the brain to loosen and tighten overnight. In this way, “something labeled as very emotionally relevant yesterday, turning out not to be life-threatening, is relabeled as less emotionally relevant,” Van Someren explains. In interrupted REM sleep, this relabeling doesn’t appear to happen, which he speculates might be linked to bursts in levels of neurotransmitters like noradrenaline, which is normally absent during REM sleep and the absence of which is important for synaptic plasticity.

It would be useful to habituate to certain emotional memories, but not all of them, notes Rebecca Spencer, a neuroscientist at the University of Massachusetts at Amherst who was not involved in the study. For instance, “while it’s good that I can learn to put up with hearing myself sing, it may not be good for me to habituate to gunfire in my neighborhood,” she explains in an email.

As with all correlational studies, it’s difficult to determine a cause-effect relationship between amygdala activity and restlessness during REM sleep, Spencer cautions. In addition, the study focuses on a population of individuals without a psychiatric disorder, so more research would be needed to say if the findings are applicable to patients with a disorder, she says.

Both Spencer and Kensinger point out that the study’s small sample size may be a limitation, though, as Spencer notes, it was sufficient enough to reveal a strong correlation between REM sleep interruptions and overnight amygdala adaptation. “This is a methodologically sophisticated study,” that forms an important contribution to research on the relationship between sleep and emotional processing, Kensinger writes, citing the joint use of MRI and in-depth studies of participants’ sleep, alongside other experimental work.

That interruptions in REM sleep have negative outcomes surprises neither neuroscientist. What is remarkable, however, is that when REM sleep is sufficiently disrupted, its typically beneficial effects on amygdala function can disappear, Kensinger says. “It’s not just the amount of REM sleep that matters, but the [quality].”