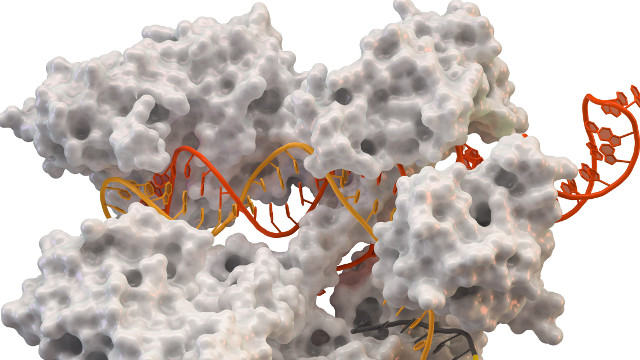 Cas9 protein structure from Staphylococcus aureus WIKICOMMONS, THOMAS SPLETTSTOESSER A team of scientists that previously identified genes within bacteriophage genomes that code for anti-CRISPR proteins has now discovered phages that harbor an antidote to the Cas9 enzyme that is a key component of the predominant CRISPR system that is today used as a gene-editing tool. The team, led by the University of Toronto’s Alan Davidson, described three bacteriophage-encoded, anti–Cas9 genes and showed that the corresponding proteins are able to block the activity of CRISPR-Cas9—derived from bacterial type II CRISPR-Cas systems—in human cells. in a paper. The team’s work, published last week (December 8) in Cell, could help researchers better understand naturally occurring CRISPR systems and better modulate the activity of CRISPR-based gene-editing tools for research and clinical applications.

Notably, the work is “going specifically after Cas9 and then applying the discoveries in human cells,” Harvard’s George Church...

“The identification of those much awaited anti-CRISPR proteins for type II systems started by classical in silico searches based on sequence similarity with already known anti-CRISPR proteins,” Philippe Horvath, a senior scientist at DuPont in France who first showed that the CRISPR system provides resistance to phages in prokaryotes and who was also not involved in the study, wrote in an email to The Scientist. “What is less trivial in this work, and really crafty, is the iterative combination of sequence similarity searches and genetic context analyses, prophesizing that type II anti-CRISPR analogs should be found at equivalent locations in completely unrelated sequences.”

See “There’s CRISPR in Your Yogurt”

Since 2013, Davidson and colleagues originally found five genes that encoded phage proteins that blocked the activity of the type I-F CRISPR system. They then followed with the identification of nine more phage proteins inhibiting both type I-F and I-E CRISPR systems, all nestled within the genomes of Proteobacteria.

For the present study, the researchers extended their search to identify sequences within bacterial species, searching for additional anti-CRISPR proteins encoded within bacterial genomes. The team again searched for sequences with homology to aca1 and aca2, two genes encoding putative transcriptional regulators that were previously found adjacent to anti-CRISPR genes.

The researchers found a putative anti-CRISPR protein encoded within the genome of Brackiella oedipodis, which harbors a type II-C CRISPR system that includes Cas9. Because Neisseria meningitides—responsible for some human types of meningitis—is known to have a type II CRISPR-Cas system, Davidson and colleagues then showed that the anti-CRISPR genes on a plasmid, when transformed into N. meningitidis, could block the cells’ type II CRISPR-Cas system. They then identified one homolog of the B. oedipodis anti-CRISPR as well as two additional anti-CRISPRs within the N. meningitidis genome.

“The three [anti-CRISPR] proteins all bind to Cas9 in different ways to block the enzyme’s DNA cleavage activity,” said Davidson. His lab is now working to understand how these proteins interact with Cas9 to prevent its activity.  “We expect that there will be many more anti-CRISPRs against other CRISPR systems,” he said.

“The obvious interest of anti-CRISPR proteins that inhibit type II systems is the possibility to modulate the activity of Cas9 in gene-editing applications,” wrote Horvath. “The expression of these inhibiting proteins could be triggered in response to a given condition, or at a particular time point in the development of an organism, which would put a stop to the activity of Cas9. A clever way to store the molecular scalpel into its safety case.”

An especially intriguing potential application of anti-CRISPRs, according to Church, are in gene drives being developed to control mosquitos and other vectors of disease.

For now, the present study enhances scientists’ understanding of the immunity involved in the interaction between bacteria and their viruses. “From all of our studies [on these anti-CRISPR proteins], we conclude that there is a strong evolutionary advantage for phage to have these anti-CRISPRs,” said Davidson.

“Knowledge about how anti-CRISPR proteins work is also relevant to other applications of CRISPR-Cas systems…Knowing how the viral enemy evades CRISPR-based immunity will provide valuable insights into ways to better fight [viruses],” wrote Horvath.