Koalas are susceptible to cancers such as lymphoma and leukemia along with chlamydia infections due to koala retrovirus, a pathogen that began inserting itself into the koala genome about 40,000 years ago and is continuing to do so. A paper published in Cell yesterday (October 10) identifies an innate immune response in koalas infected with KoRV.

Viral DNA makes up about 8 percent of the human genome—but these insertions happened in our primate ancestors millions of years ago, so far back in evolutionary history that scientists haven’t been able to watch the process unfold in an animal before, reports STAT.

“What [koalas] are going through is the process of what’s driven the evolution of every animal on the planet,” William Theurkauf, a geneticist at the University of Massachusetts Medical School and lead author of the study, tells The New York Times. For example, he says, a gene necessary for the placenta originally came from a virus millions of years ago.

Theurkauf’s team studied small RNAs called piRNAs from tissue samples of koala testes, livers, and brains. They found that piRNAs provide a first-line defense against viruses by targeting foreign DNA that is moving around the genome. But the defenses don’t always hold up, allowing a virus to insert itself into the genome and get passed on to future generations. In addition to KoRV, four other viruses are also moving between koala genes. “It’s evolution in real time,” Theurkauf says to the Times. Through this research, scientists may begin to better understand how our own genome acquired viral DNA so long ago. 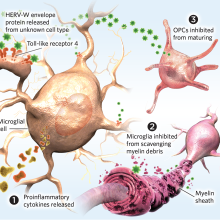