A report finds a decline in the number of experiments involving animals in 2017, noting a particular decrease in procedures on dogs and primates.

ABOVE: Animal procedures are down 3.7 percent from 2016.
ISTOCK, UNOL

The UK government published its annual statistics last week (July 19) on the number of scientific procedures undertaken in Great Britain, tallying up almost 3.8 million in 2017, a 3.7 percent drop from 2016. The number reflects both experiments and other interventions, such as genetic modification, involving lab animals.

“I was surprised” at the decrease, says geneticist Robin Lovell-Badge, head of the division of stem cell biology and developmental genetics at the London-based Francis Crick Institute. He would have expected numbers to have gone up, given the increasing adoption of technologies such as CRISPR that make the creation of genetically altered animals less cumbersome.

The reasons for the decrease are unclear. But Lovell-Badge says he thinks that the increasing costs of maintaining animals for research might play a role. This is driven largely by recent pushes for...

“The other thing that could perhaps have helped reduce the overall numbers of animals bred is people are now—more and more—making use of cryopreservation,” he adds. Instead of continuously breeding mice to maintain certain genetically modified strains, he says, his lab routinely freezes sperm and embryos that can be developed at a later date.

“I think there’s a number of possible reasons,” says Dominic Wells, chair of the animal sciences group at the Royal Society of Biology and professor of translational medicine at the Royal Veterinary College. The numbers may reflect less animal work being funded during the previous year, or pharmaceutical companies moving between certain areas of research, for instance. Some yearly fluctuation in numbers is also normal, he says. 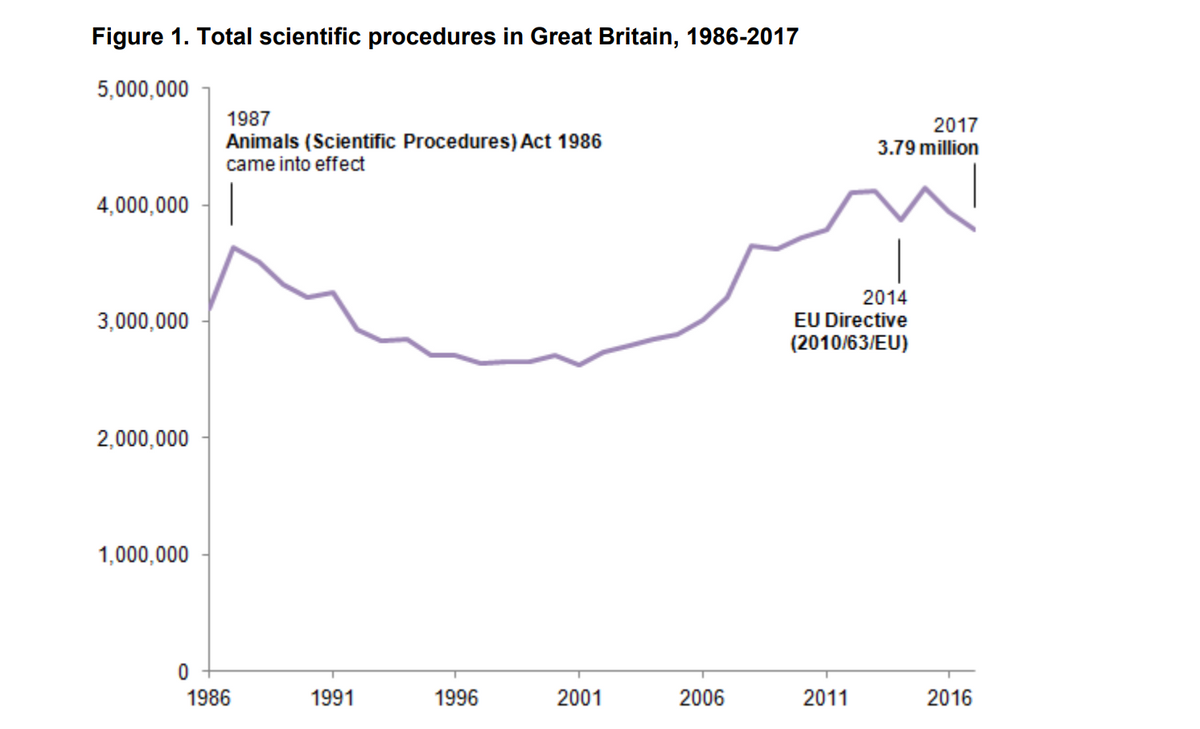 Caption Total numbers of scientific procedures involving animals in the UK over time. Figures have however around 4 million in recent years. The EU directive on the protection of animals used in science includes a series of requirements on the conditions under which lab animals must be kept.
Annual Statistics of Scientific Procedures on Living Animals Great Britain 2017

The numbers aren’t reflective of the total animals that are being used, notes Hannah Hobson, communications and policy officer at Understanding Animal Research, a London-based organization funded by industry, academia, and nonprofits in the biomedical field that researches the costs and benefits of animal research in the UK. For instance, horses, which are used for the provision of blood for diagnostic products, can undergo multiple procedures throughout their lifetime. “The number of animals is [usually] about 1 to 2 percent lower than the number of procedures,” she says. The statistics also don’t reflect numbers from Northern Ireland, which reports its figures separately from the rest of the UK.

The report shows a considerable decrease in the number of experimental procedures on dogs and primates, which, along with cats, are considered “specially protected species” under UK law, and are used in less than 0.2 percent of studies. Researchers used horses, on the other hand, much more frequently in 2017 than in any other year over the past decade, but it’s unclear why. It “probably reflects minor market changes,” writes Wells in an email.

Most primates are used for toxicology and safety pharmacology. “They’re part of the final set of tests that a drug undergoes before it goes to humans,” Wells says. Therefore, the decline in primates might possibly reflect a decrease in the number of new drugs being tested, he speculates.

There is also concern that the UK’s strict requirements and the cost of primate studies might be an incentive for pharmaceutical companies to outsource those experiments to countries where they can be done more cheaply. “That’s always a worry,” he says. 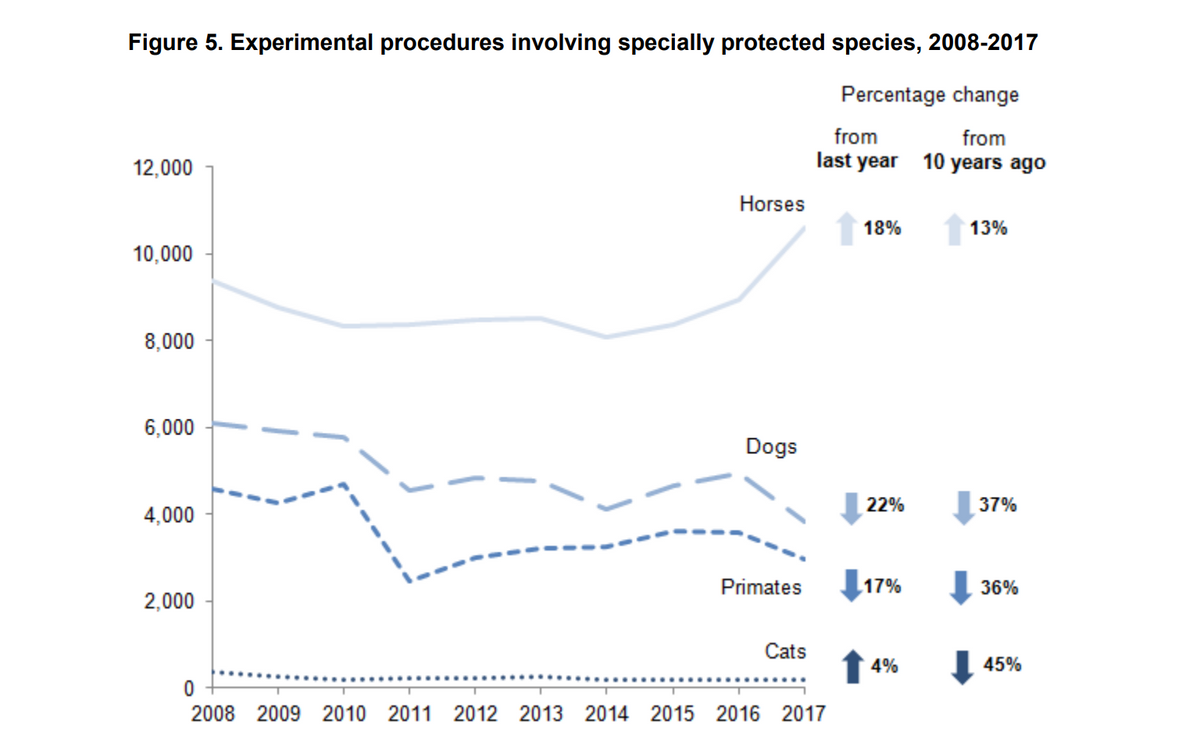 Time will tell how these figures will play out after the impending departure of the UK from the European Union. While the Animals (Scientific Procedures) Act, which regulates the use of protected animals in science, is domestic law and does not depend on EU regulation, Hobson notes, there are other factors at play. “If scientists move out of the UK, or funding from the EU moves elsewhere, then biomedical research may suffer and animal numbers may fall,” she writes in an email. “On the other hand, if the UK can continue to maintain its status as a world leader in biomedical research, then numbers may be unaffected, or could possibly increase.”