ABOVE: In Masiphumelele township, 80 percent of the population are infected with TB by the time they reach young adulthood.
LINDA NORDLING

In Masiphumelele, an informal settlement of tin shacks, squat brick buildings, and narrow lanes south of Cape Town, 23,000 people go to school, run businesses, sleep, and socialize cheek by jowl. As a result, communicable diseases are rife—especially tuberculosis (TB), which infects around 80 percent of residents by the time they reach adulthood.

A new research facility opened here this month aims to curb TB by studying how it is transmitted in the local community. The R10 million ($700,000 USD) Aerobiology TB Research Facility will allow microbiologists from the University of Cape Town (UCT) to study Mycobacterium tuberculosis captured from the exhaled air of local TB patients.

It will do so using locally developed technology. On the ground floor of the two-story building, TB patients will enter...

For now, it’s not the easiest or cheapest way to identify TB infection. But in time, the scientists hope to scale it up into a high-throughput diagnostic tool to help identify so-called “super-spreaders” in the community. They also want to identify the locations in the community where TB is spread, which would help target TB prevention services. “We want to find everyone who is transmitting in the neighborhood,” says Robin Wood, director of UCT’s Desmond Tutu HIV Centre and one of the brains behind the new site.

As basic scientists we don’t do a lot of social research, we don’t understand the social factors. But when you bring all of it together in one place, it becomes really powerful.

Spotting super-spreaders will be easier said than done. To do that, the technology will have to be able to screen dozens of patients per day in Masiphumelele alone, returning findings quickly and without inconveniencing patients. This will require advanced automation of the sample processing, whereas microscopists currently have to inspect thousands of nanowells one-by-one to detect bugs in one sample. Research is also needed into whether the amount of TB a person exudes determines how infectious he or she is, or whether it’s specific strains of TB that drive infection.

Further afield, the challenge will be multiplied thousandfold. The city of Cape Town has more individuals living with TB than the United States, the United Kingdom, Germany, and France put together, Wood says, and the bacterium infects twice as many people in Cape Town as it did 100 years ago. Childhood infection rates are particularly high. By the age of five, 20 percent of children in Masiphumelele are infected with TB, and by the time they have reached high school that proportion rises to 50 percent.

Infection rates are so high here partly because HIV has rendered millions of South Africans susceptible to TB. But Wood thinks HIV alone doesn’t explain the elevated infection rates in places like Masiphumelele. Rather, he thinks there is a large reservoir of infected individuals who aren’t reached by treatment programs, which focus on active disease. “You’ll never stop the disease unless you stop people getting it,” he says.

This is where the clean-room sampling technology comes in. Unlike TB tests where patients are asked to cough, samples from the clean box are passive—patients may cough if they need to (and these are documented), but they are not prompted to. This will allow the scientists to determine whether coughing transmits TB better than just breathing the same air as somebody who is infected.

The technology is still in its infancy, and for the next few years, microbiologists from UCT plan to perfect the clean box collecting mechanism. Digby Warner from UCT’s Institute of Infectious Disease and Molecular Medicine who leads the microbiology work says it’s exhilarating to work on TB obtained from patients. Working on lab strains is “like seeing lions in the zoo,” he says. But studying TB from people infected naturally is “like seeing the organism in the wild.”

For others on the team, the center’s location provides a welcome human connection with the disease they study. Anastasia Koch, who will study the genomic fingerprints of M. tuberculosis extracted from the samples, says she knows of no other location in the world where such high-tech equipment is located in such close proximity to the affected community. “That changes the way you think about the research,” she says. “As you drive into ‘Masi’ you think about how transmission happens socially. As basic scientists we don’t do a lot of social research, we don’t understand the social factors. But when you bring all of it together in one place, it becomes really powerful.” 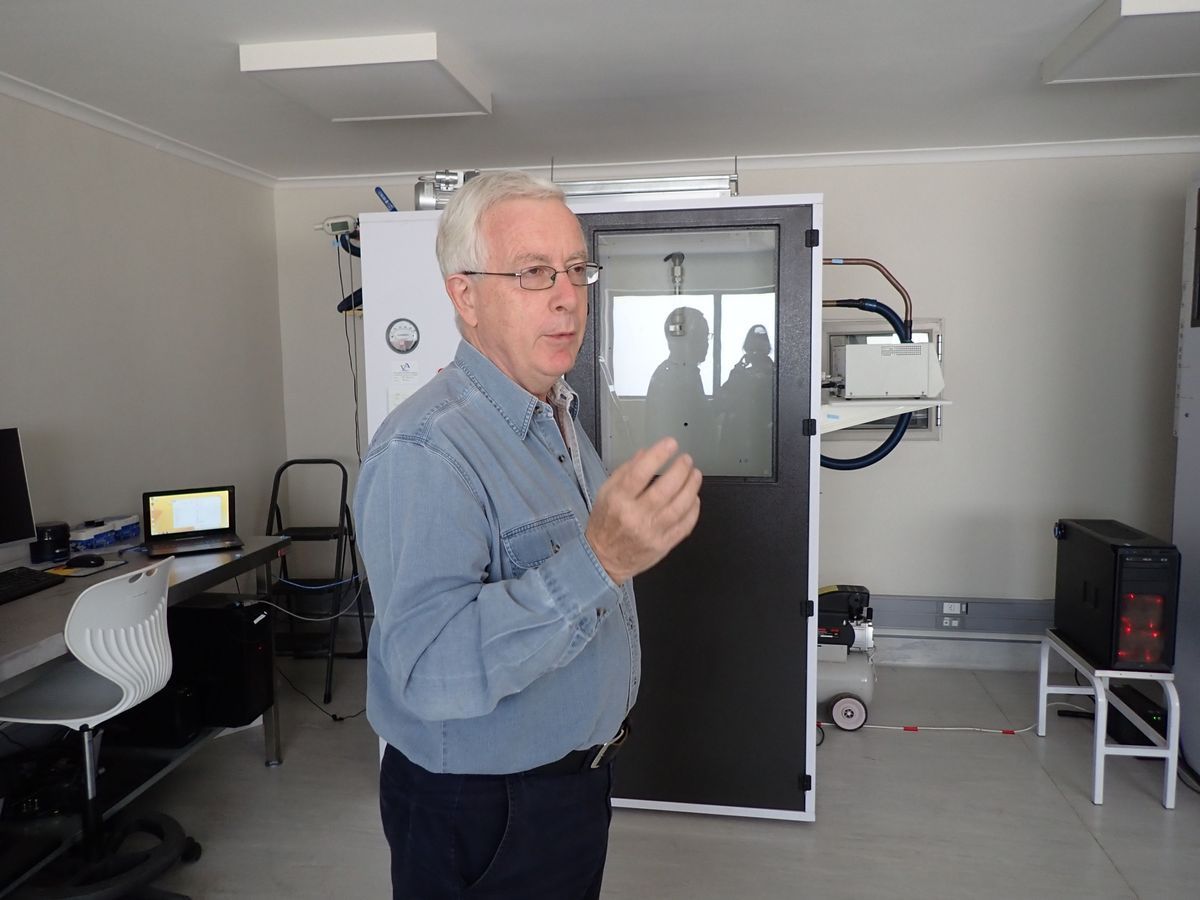 CaptionRobin Wood, director of the University of Cape Town's Desmond Tutu HIV Centre, standing in front of the personal clean room, which samples air exhaled by TB patients and funnels it through liquid to pick up particulate matter.
linda nordling

The next step for the microbiology team is to ensure that what they are seeing in the samples is, in fact, M. tuberculosis. To do that, they have to isolate single cells and study them—something the team hasn’t been able to do just yet. “We have a lot of circumstantial evidence that what we’re seeing in our slides is TB. It looks like TB, we can culture TB from it, and it stains like TB,” Warner says. But there’s a lot of “gunk” in the slides, including other bacteria, he says, and it’s vital for the sake of future automation that the TB identification is above reproach. “The challenge over the next few years is to get to a point where we can capture the organism off the slide, and either grow it up in culture or get a lipid or protein signal to confirm that what we have seen is definitely TB.”

For this next stage, Warner and his colleagues are teaming up with colleagues at MIT and Imperial College London. They will use a new fluorescent probe developed by MIT to see if it is better at selectively labeling M. tuberculosis than the TB-highlighting probe the Cape Town team currently uses, called DMN-trehalose, and work on ways to extract the highlighted bacteria from the samples for further analysis.

But Wood’s method of studying transmission is not without its detractors. Not all TB particles detected in exhaled air are able to cause infection, says Edward Nardell of Harvard Medical School, and counting microbes in the air could therefore overestimate the infectiousness of patients. Nardell is part of a group that since 2005 has been studying TB transmission in another part of South Africa by venting air from tuberculosis patient rooms through guinea pig cages to find how many animals catch the disease. “This measures actual infection, the event of interest,” he says. “Sometimes old methods remain the best.”

Eric Rubin, a microbiologist at Harvard T.H. Chan School of Public Health, says the work Wood is undertaking is “unusual and difficult.” But he says that while the transmission work on guinea pigs has yielded interesting and clinically translatable results, “Robin’s work is different as he is interested in underlying molecular mechanisms.”

Others are more unequivocally supportive. “Having such a dedicated unit unravelling how TB is specifically conveyed from an infected person to a susceptible person is a step change,” says Derrick Crook, an infectious disease microbiology specialist at the University of Oxford. “The benefit is that the factors that promote or prevent this can now be disentangled. Doing it where such spread is happening gives the researchers the best possible chance of sorting this out.”