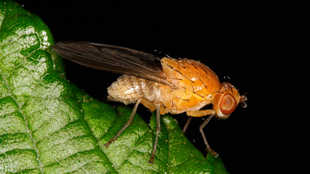 The research, published today (April 4) in Nature, suggests that much of scientists’ current understanding about Drosophila circadian behavioral rhythms may actually be wrong. It also emphasizes the importance of studying organisms in natural environments.

“It’s always been a mystery as to how flies really behave in the wild,” said Paul Hardin, director of the Center for Biological Clocks Research at Texas A&M University, who was not involved in the study. “This study is really novel. It comes closer than any other paper in revealing the activity pattern of single flies in nature.”

“This is the first paper for flies suggesting that if you study the clock in a wide, natural environment, you pick up features that are impossible to observe in simplified laboratory conditions,” said senior...

Circadian rhythms—24-hour behavioral and physiological changes driven by oscillating biochemical mechanisms—are present in almost all organisms, including humans and even some bacteria. Many human health problems have a rhythmic component, including sleep disorders, jetlag, even obesity and cardiovascular disturbances.

Since insects and humans share many clock genes, scientists have used Drosophila as a model system for circadian studies for the last 40 years. Almost all of those experiments, however, were done in the lab, and utilized similar artificial conditions. The flick of a switch turns the lights on suddenly in the morning and off suddenly at night, for example—there is no dawn or dusk. Flies are also typically kept at a constant temperature, in contrast to temperature increases that flies experience in the afternoon in nature.

In 2006, Costa, along with Charalambos Kyriacou at the University of Leicester in the United Kingdom, set out to observe Drosophila in a natural setting. Their research was part of the EUCLOCK project, a multi-center project to study circadian clocks in numerous organisms involving 34 chronobiologists from 11 European countries.

The researchers set up two outdoor fly monitoring centers, exposed to changing sunlight and temperatures but sheltered from wind and rain: one in a child’s Toys“R”Us playhouse in the cold, wet environment of Leicester, England, and the other in a rooftop garden in warm, sunny Italy. Temperature, light intensity, humidity, and fly activity were continuously monitored from April to November for 3 years, from 2007 to 2009.

The results were dramatic. Numerous aspects of fly behavior previously recorded in the lab were dramatically different outside. First, flies outdoors were most active during the day, rather than at dawn and dusk as seen in the lab—demonstrating the flies’ diurnal (daytime) rather than crepuscular (from the Latin word for twilight) activity patterns. This difference stemmed in part from the fact that flies did not take an afternoon “siesta,” a period of decreased activity in the middle of the day, as observed in the lab. Instead, they exhibited a burst of midday activity. Two other studies from the EUCLOCK project have made similar findings: both laboratory mice and hamsters are diurnal in outdoor settings, but nocturnal in the laboratory.

Second, classical models suggest that there are morning and evening circadian oscillators controlling fly behavior. But outdoors, fly activity in the morning appeared to be a physical response to changing temperature, rather than a clock-controlled behavior.

Finally, and perhaps most surprising, clock mutants did not demonstrate defective rhythms in a natural setting—they had normal behavioral cycles. “It was really unexpected,” said Costa. In the lab, classical clock mutants have peculiar circadian behaviors that differ dramatically from wild type flies. But this was not so in the natural environment. It is possible that the complex environmental information that flies receive outdoors bypass mutations in single clock genes, said Costa, but more research is needed to iron out those mechanisms.

Still, the behavioral findings do not extrapolate to basic circadian molecular mechanisms underlying physiological changes, such as metabolism, Costa emphasized. As far as we know, “at the physiological level, morning and evening oscillators are still doing their job modulating the biochemistry of the fly,” he said.

At the end of the study, Costa and colleagues attempted to reproduce the natural circadian phenotypes in a laboratory by mimicking outdoor light and temperature conditions in Italy. They were pleased to find that they could successfully observe the natural rhythm behaviors in the lab using the new simulations, but Costa still believes that outdoor experiments will yield the most illustrative results.

“If we want to understand exactly how the clock works, we think it is going to be very useful to have approaches” to observe organisms living in nature, said Costa. “We cannot simply transfer what we know in the lab into natural conditions.”